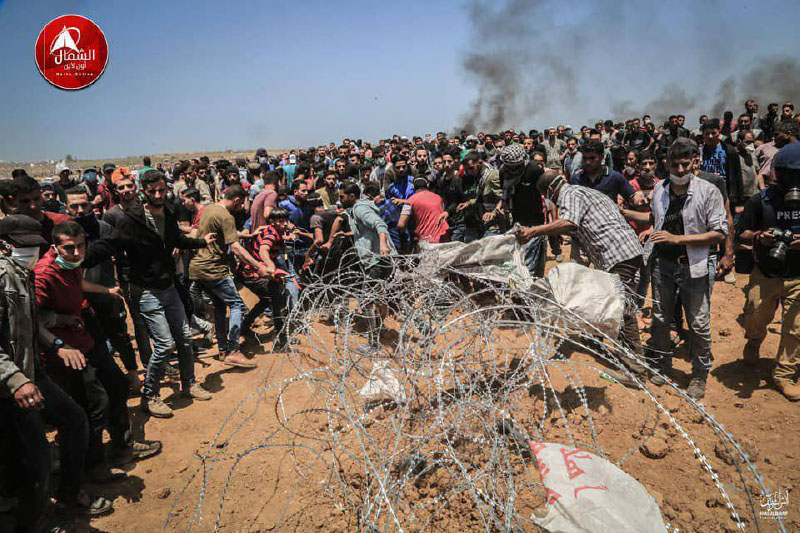 Findings of the examination of the names of fatalities

According to the findings of examinations carried out by the ITIC, at least 112 Palestinians were killed during the “Great Return March.”[1]In an examination of the names of the fatalities on an individual basis, 93 were identified as terrorist operatives or affiliated with the terrorist organizations, i.e., about 83% of those killed in the “return marches.” Most of the fatalities (63) are from Hamas (about 56% of the total killed in all the marches). Fatah, which had 21 fatalities, played a minor role, with no significant impact on the events. The other organizations, including PIJ operatives (four fatalities) refrained from playing a significant role, maybe because of their awareness that this is a Hamas “project.” The organizational affiliation of 19 of the fatalities is unknown to the ITIC. It may be assumed that these are Hamas operatives or civilians who do not belong to any organization. Main findings of the ITIC’s examination[2]

In the violent events on May 14, 2018, and in events that continued on a lower profile on May 15, 2018, the ITIC identified the names of 64 fatalities. Of these fatalities, 53 (around 84%) were terrorist operatives or affiliated with terrorist operatives, the vast majority (around 67%) from Hamas (Hamas cited a higher percentage: senior Hamas figures Yahya Sinwar and Salah Bardawil admitted that 50 out of 62 shaheeds, i.e., 81%, were Hamas operatives[3]). Most of those killed died during violent clashes with IDF forces, in the front line of demonstrators on the Israeli border. Some were killed while carrying out terrorist attacks or attempting to cross the security fence into Israeli territory. During the riots on May 14, 2018, the Palestinians also fired indiscriminately and massively at IDF drones (quadcopters) from the area of the tent camps in the rear (where there were apparently weapons). Therefore, it is possible that at least some of the Palestinian fatalities were hit by this gunfire.

Distribution of the fatalities from May 14 and May 15, 2018 by organization

The basis for the ITIC’s list of fatalities was the list of 55 fatalities published by the Palestinian Ministry of Health on May 14, 2018. The missing names were found by the ITIC through searches on Facebook pages and other media outlets, where the names of those killed or those who died from their injuries were reported sporadically. In these searches, the ITIC identified the names of 64 Palestinians who were killed on May 14 and May 15, 2018, and this was the basis for its examination. The central role played by Hamas’s casualties in the events of May 14, 2018

The high percentage of Hamas operatives who were killed during the events of May 14 and in the previous events once again demonstrated Hamas’s central role in planning and controlling the events. In the “front line” of the violent demonstrations, there were also Hamas operatives in civilian clothes who played a central role in the acts of violence and attempts to break into the sovereign territory of the State of Israel. These operatives were “protected” by women and children who were sent by Hamas to the front line to serve as human shields. In the ITIC’s assessment, the large number of casualties among the operatives is primarily a result of Hamas’s central role in the events, and senior Hamas figures do not bother to hide this. Hence the Palestinian propaganda message that these were “popular” demonstrations carried out in “peaceful ways” is a false message that the Palestinians have managed to convey to many countries around the world, including Western countries.

Continuation to be expected

In the ITIC’s assessment, from Hamas’s perspective, the violent riots and demonstrations have not yet exhausted their inherent political and propaganda benefits. Senior Hamas figures call on their operatives and the entire Gazan public to continue the riots and even to die as shaheeds. The “National Authority for the Great Return March,” serving as a front for Hamas, called on the Gazan public to continue the marches on Friday, May 25, under the slogan “Continuing despite the siege.”