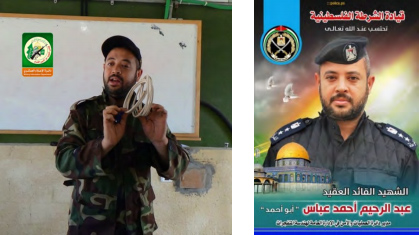 On September 5, 2018, the Hamas-controlled Interior Ministry in the Gaza Strip issued an announcement on the death of Muqaddam (Lieutenant Colonel) Abdel Rahim Ahmad Ahmad Abbas (Abu Abbas). He had served as chief of Security and Operations in the Bomb Disposal General Department of the Palestinian Police. Concurrently with the announcement of the Interior Ministry, the Hamas military wing published a death notice of its own on Abdel Rahim Abbas’s death, noting that he had served as a Hamas military wing field commander.