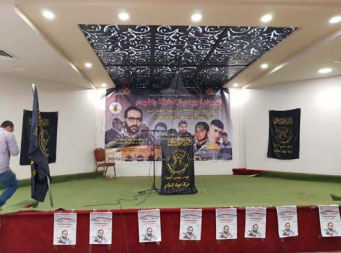 On November 10, 2018, the Palestinian Islamic Jihad (PIJ) held a rally to mark the anniversary of the founding of the organization and the death of its founded, Fathi Shqaqi. The rally was held in a large hall in al-Bireh where a recorded speech by Ziyad al-Nakhalah, the newly elected PIJ leader, was played. Al-Nakhalah stressed the importance of the armed struggle against Israel and called on the residents of the West Bank “to lead the armed resistance against Israel as they did in the [second] intifada in 2000” [during which the PIJ was one of the most prominent organizations in carrying out suicide bombing attacks].

Al-Bireh is next to Ramallah (and about 15 kilometers, or about nine miles, from Jerusalem). It is an important administrative center for the Palestinian Authority (PA) in Judea and Samaria, and some of the PA’s offices are located there. It can be assumed that al-Nakhalah’s speech could not have been given in al-Bireh without the authorization, or at least the prior knowledge, of the PA’s security services. However, the PIJ claims that both the PA and Israel exerted pressure on the PIJ’s Paltoday TV station not to broadcast the rally live. The end result was that Paltoday uploaded a short video of the rally to its Facebook page after it had ended. According to al-Nakhalah’s speech, “the Palestinian Islamic Jihad renews its commitment to its leaders and shaheeds from the heart of the West Bank” (Paltoday TV Facebook page and Twitter account, November 10, 2018).