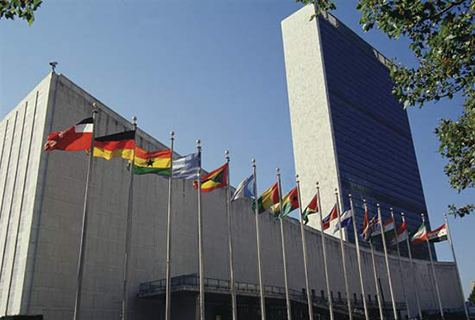 For decades, American taxpayers have poured hundreds of millions of dollars into United Nations “aid” agencies that went to promote Palestinian propaganda wars against Israel. The most notorious is UNRWA (the specialized Palestinian refugee framework created in 1949), which was finally cut off last year.

But the problem continues in other and in some ways even more virulent forms. For example, the “Occupied Palestinian Territory” branch of the U.N.’s Office for the Coordination of Humanitarian Affairs (OCHA-oPt) is also neck-deep in political warfare and demonization.

Under the guise of providing aid, this agency sends out a constant flow of false accusations, including reports to the Security Council and “news items” promoted on its specialized ReliefWeb media platform. The officials also coordinate the agendas of dozens of NGOs (non-governmental organizations) that are active in these political attacks. The anti-Israel Norwegian Refugee Council and the Palestinian NGO Network (PNGO) are among their main partners in promoting radical goals.

But the façade that has protected OCHA-oPt and its partners is being slowly stripped away. Jamie McGoldrick, the U.N.’s “Humanitarian Coordinator,” complained about “UN Watch and NGO Monitor, [the organization I founded and lead] who are out there to delegitimize humanitarian action in Palestine, including allegations of misconduct and misuse of funds.” In January, his organisation’s bulletin warned against what they refer to as Israeli “delegitimization, access restrictions, and administrative constraints,” and warned about a nefarious “network of Israeli civil society groups … with the apparent support of the Israeli government.” No details are provided—only shadowy allegations and hints of dark conspiracies. (For the record, NGO Monitor neither requests nor receives any support from any government, unlike OCH-oPt’s circle of friends.)

Getting further into the mud, this diatribe refers to “Targeted defamation and smear campaigns [that] allege violations of counter-terrorism legislation … Most of these allegations are baseless or misrepresent and distort critical factual or legal elements. Humanitarian organizations operating in the oPt adhere strictly to the principles of neutrality, impartiality, independence and humanity…”

Behind the bluster, the evidence clearly exposes OCHA-oPt’s facade. For example, a number of core groups are affiliated with terror organizations such as the Popular Front for the Liberation of Palestine, as first documented in NGO Monitor’s meticulous research (in sharp contrast to U.N. practice) and reiterated by the Israeli Ministry of Strategic Affairs. The terror links of groups such as the Palestine Center for Human Rights (PCHR), Defence for Children International-Palestine (DCI-P), Addameer, Al Haq and others—members of OCHA’s “displacement working group”—are nether “baseless” nor distortions.

The claim to “adhere strictly to the principles of neutrality” is a farce. Partners such as Norwegian People’s Aid, and Medical Aid for Palestinians, devote significant resources to demonizing Israel. Also, many of OCHA-oPt’s NGO clients are among the leaders of anti-Semitic and anti-Israel BDS and lawfare campaigns before the International Criminal Court. Their Israeli NGO partners, such as B’Tselem and Adalah, are political opposition groups with no role in humanitarian aid. Use of terms such as “neutral” and “impartial” in this context strips them of all meaning.

The text also condemns “restrictions imposed on humanitarian staff and operations,” by which they apparently mean the arrests of NGO and U.N. officials for diverting funds and materials to terrorist organizations in Gaza. There have been a number of cases in which aid officials, including U.N. employees, were tried and convicted of diverting large funds to Hamas. In 2016, World Vision’s Gaza manager Mohammed Halabi was charged with stealing $50 million for use in terror attacks. Neither the terror links nor the arrests were mentioned in the propaganda because for OCHA-oPt, all Palestinians are victims, and terrorism does not exist.

This and similar diatribes from the Palestinian propaganda industry reflect a real threat. A series of detailed research reports, particularly from NGO Monitor, have resulted in much-needed reforms imposed by the donor countries. As noted by OCHA-oPt, 23 percent of NGO allies had been “forced to alter, suspend or terminate existing programmes, in part or in full; 22 per cent said they had faced threats of, or actual, legal or administrative actions against them; and 55 per cent reported that they had to answer additional donor queries about their programming. Overall, 43 per cent … indicated that the campaign had undermined their funding for certain types of activities.”

As countries such as Switzerland, Denmark, the Netherlands, the United Kingdom, Norway, the European Union and others re-evaluate their NGO funding policies in the Israeli-Palestinian conflict zone, the impacts will increase. After their basic due diligence failures in following OCHA’s “coordination” and wasting millions in taxpayer funds on groups that promoted the opposite of the moral values that were claimed, these governments had no choice but to change policies. As a result, the anti-Israel propaganda machine coordinated by OCHA-oPt has considerably fewer resources to wage these wars.

The crisis faced by this and other U.N. agencies claiming to be assisting the Palestinians is the result of their own fundamental failures, and no amount of empty rhetoric, bemoaning the “shrinking of the operational space available for humanitarian work” will hide this reality. Eventually, even OCHA-oPt, like UNRWA, will be forced to stop these wasteful and destructive propaganda wars which have cost Israelis, Palestinians and American taxpayers so much.