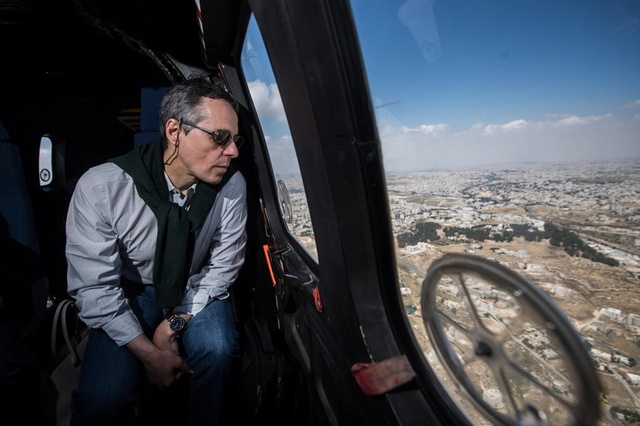 United Nations aid work for Palestinian refugees is a stumbling block to peace in the Middle East, hindering the integration of Palestinians who have lived in Jordan and Lebanon for years, according to Swiss Foreign Affairs Minister Ignazio Cassis.

So long as Palestinians live in refugee camps, they can dream of returning home, he said in an interviewexternal link published in several Swiss newspapers on Thursday.

Five million Palestinian refugees currently live in such camps, with aid and protection provided by the UNRWAexternal link, the United Nations Relief and Works Agency for Palestine Refugees in the Near East.

“It is unrealistic that all of them can fulfil this dream. Yet the UNRWA keeps this dream alive,” Cassis said. “For a long time the UNRWA was the solution to this problem, but today it has become part of the problem. It supplies the ammunition to continue the conflict. By supporting the UNRWA, we keep the conflict alive. It’s a perverse logic.”

He called for the integration of long-term refugees in their countries of residence. Instead of UNRWA schools and hospitals, he said Switzerland could support Jordanian facilities to promote the integration of Palestinian refugees.

Unlike the United States, Switzerland does not want to significantly reduce or end UNRWA involvement.

“In other cases that’s a good move: if there’s no money, things finally happen,” Cassis said. “But in this case, that’s a big risk: millions of Palestinians could end up on the street. If all nations refused to contribute to the UNRWA, a machinery would collapse that ensures a certain stability. This is a risk that Switzerland can’t afford – perhaps unlike the US.”

The UNRWA was founded in 1949external link following the 1948 Arab-Israeli conflict and is funded almost entirely by voluntary contributions from UN member states. The Swiss foreign affairs ministry says it is set to pay CHF21.2 million ($21.2 million) for 2018.

The US this year cut its contribution from $360 million to $60 million. “This is our largest funding crisis ever,” said the UNRWA’s Swiss head Pierre Krähenbühl on April 24.​​​​​​​