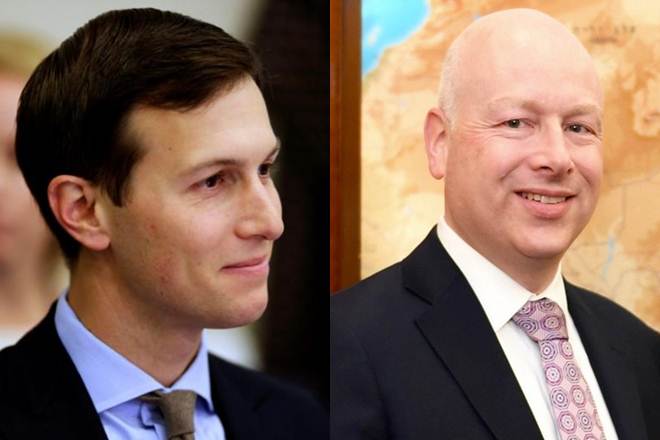 The media universally reports that US Presidential envoys Kushner and Greenblatt are currently “expected to discuss only the economics of the Palestinian Authority at this time”.

There is a danger that their singular focus on economics will allow the Palestinian Authority to continue to operate a school system based on war indoctrination – without any constraints.

With the genesis of the nascent Palestinian Ministry of Education, the Center for Near East Policy Research, which I direct, took upon itself the responsibility to examine attitudes to war and peace which appear in Palestinian Authority schoolbooks used by the PA and UNRWA, ever since the PA issued its new school books in the August 2000

We gained access to new PA school books after I politely asked permission of PLO leader Yassir Arafat to examine these texts.

Yassir Arafat, who always reminded the world that he was a Nobel Peace Prize Laureate, assured me that new PA textbooks would promote peace and reconciliation.

And on August 1, 2000, on the very day that the first new PA school books began to come out, I met with the PA Minister of Education at the time, Nayim Abu Hummus who sent me to the PA school book stores, with Arafat’s permission.

Since that time, my staff has met with all three subsequent PA ministers of education, and, with the authorization of the PA, we purchased all 364 PA schoolbooks used by the PA and by UNRWA.

We commissioned Dr. Arnon Groiss, a 42 year veteran of the Voice of Israel Arab language Department to examine the PA school books.

And over the past 19 years, all 364 were examined and found to be devoid of any hint of education for either peace or co-existence.

Quite the opposite. Most recently, a new PA textbook for Grade 3 glorifies the necessity of “exterminating” foreigners and “scattered remnants”, namely, the country’s Jewish inhabitants, following the removal of Israel (the “ usurper” is the terminology used for Israel in PA textbooks )

Another new PA textbook, for Grade 5, presents a portait and profile of an Arab terrorist Dalal al- Mughrabi, who led a terrorist attack with a team of five killers on the coastal road in March 1978.

After they murdered the first Jew they met on the beach, American photographer Gail Rubin, niece of Senator Abe Ribicoff (D-Conn) Dalal and her gang commandeered a civilian bus and murdered 38 people, including 13 children.

In a three page lesson plan, Dalal is presented as a role model for the Palestinian Arab children to emulate.

Such “education” represents the vile indoctrination which should first be addressed – before economics, if any semblance of peace is to be achieved.

White House sources confirm that President Trump saw the new PA school books which we sent him, and that their content outraged him.

That is where Kushner and Greenblatt must first place their attention.

If they do, they will earn the respect of the President of the United States, who delegated them on a mission of peace in the Middle East