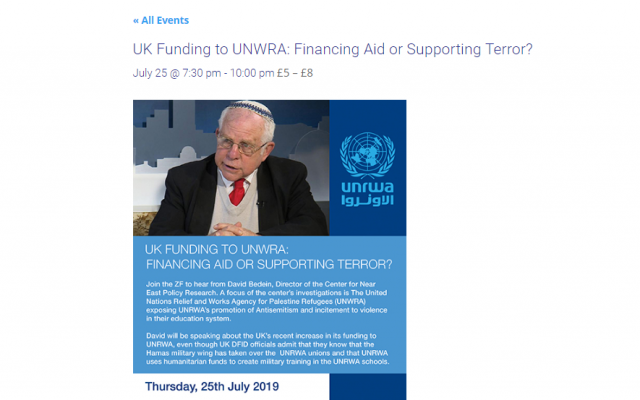 The Zionist Federation (ZF) has defended its decision to host an Israeli activist in London this week, despite claims he shared a platform with disciples of Meir Kahane.

David Bedein is due to speak at an event in Finchley on Thursday, discussing the UK government’s funding for the UN Relief and Works Agency for Palestinian Refugees (UNRWA).

He argues the UN agency “demonises both Israel and Jews”.

Professor Rex Brynen of McGill University in Canada has said Bedein has “enormous credibility problems” and accused him of having links to the Kahanist movement – something Bedein stridently denies.

Kahane was an American rabbi who co-founded the right-wing Jewish Defence League and was convicted of conspiracy to manufacture explosives. He was assassinated in 1990.

In 2012, Ha’aretz reported that Bedein was a speaker at a conference discussing “Holocaust lessons” led by Kahane disciple Michael Ben-Ari.

Bedein said: “There is not a word of truth to these silly allegations. I debated Kahane and was a consistent fervent opponent of Kahane. The Kahanists have never forgiven me for that.”

Bedein’s invitation to speak to a London audience by the ZF, in an event open to non-members, has raised communal concerns, including from Alexandra Wright, senior rabbi at the Liberal Jewish Synagogue and another communal source – who asked to remain anonymous – who claimed the ZF “is giving a platform to a well-known anti-Palestinian activist with links to far-right groups in Israel”.

ZF chair Paul Charney staunchly backed Bedein, adding: “We have no knowledge of any direct association with extremists. Until this is proven we will continue our association.”

Center for Near East Policy Research
195 POSTS0 COMMENTS
© A WEBstationONE.com production, partially funded by the Internet Development Fund and the IDF Link technology. © 2003-2020 All rights reserved. Articles and Special Reports on IsraelBehindTheNews.com are copyrighted. Every reader is welcome to reprint any and all articles, and with citation.
MORE STORIES

An analysis of the names of Gazans killed during Operation Guardian...

Center for Near East Policy Research - September 24, 2021
During Operation Guardian of the Walls, May 10-21, 2021, the Palestinian terrorist organizations in the Gaza Strip launched 4,360 rockets at Israeli cities and towns...