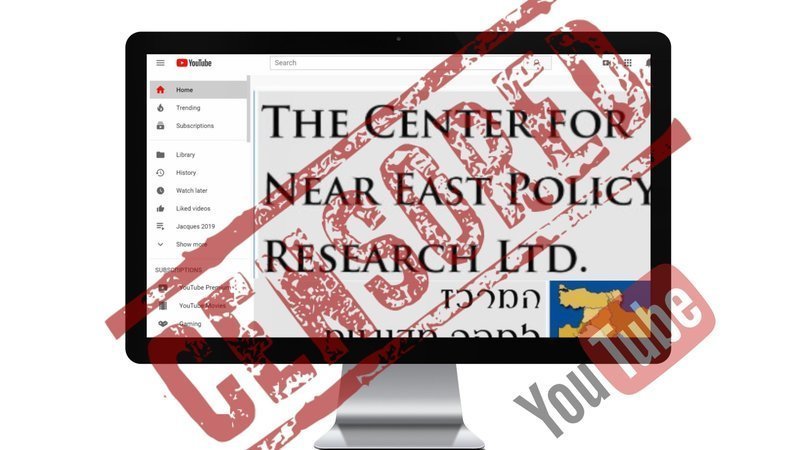 CNEPR had posted a series of videos demonstrating that schools and other activities of the United Nations Relief and Works Agency (UNRWA) have been promoting violence, antisemitism and extremism. UNRWA schools educate over 500,000 Palestinian schoolchildren. The effects of indoctrination at these schools are profoundly damaging to the students and to peace and stability in the Middle East.

For years, UNRWA and other UN bodies, states and NGOs have denied or ignored these problems. As a result they have continued, resulting in further violence, casualties and deterioration of the prospects for peace.

CNEPR therefore sought to demonstrate the existence, nature and consequences of the indoctrination by including footage of it taking place at UNRWA schools and activities in their videos. But this was all done in context so as not to shock or disgust or encourage the commission of violent acts. On the contrary the aim was to stop the encouragement of violence. The videos complied with YouTube policies.

The videos may be accessed here.

The censoring of these videos is an unjustified restriction of freedom of expression and information regarding the activities of UNRWA, contrary to the core values of YouTube. This censoring is all the more the serious at the present time, since States that contribute to UNRWA are currently considering whether to renew its mandate and, if so, on what terms. It is therefore particularly important right now to demonstrate to decision-makers and the public what is happening at UNRWA schools and other activities, in order to ensure that correct decisions are made that will stop this indoctrination.

In short, by restricting the visibility of CNEPR’s videos, YouTube risks contributing to a continuation of the promotion of violence, antisemitism and extremism.

CNEPR apparently received no warning or notification of any objection to their videos prior to the complete suspension of their account. If YouTube issued any warnings or notices, they did not come to the attention of CNEPR. In any case, for the reasons explained above, CNEPR’s videos complied with YouTube’s policies on violent or graphic content, and the objections should not have been made or accepted.

In these circumstances, it seems to us that YouTube has acted wrongly and in breach of contract by suspending CNEPR’s account. We demand that it be reinstated without delay in view of the current situation described above.

Finally, we would add that our experience suggests that there may be a systemic problem in failing to distinguish between content that promotes violence and content that draws attention to the promotion of violence with a view to securing its suppression. A system which fails to distinguish between these categories is susceptible to abuse by those who seek to avoid exposure of the promotion of violence in order to facilitate its continuation.

For these reasons we ask you to sign this petition.

International Movement for Peace and Coexistence