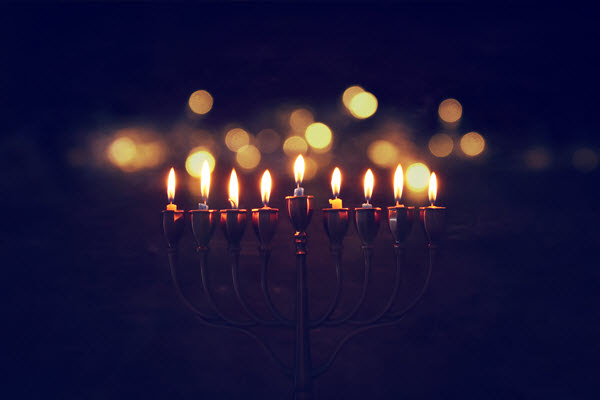 We are in the midst of what is commonly known as the “festive season.”

For those of us living in Israel, it is a time of sufganyot (donuts), latkes, eight days of candle lighting and no school.

As a friend explained to me this week on her return from the USA,  for Jews in the Diaspora it is a time of being surrounded by tinsel, carols and fir trees which makes celebrating Chanukah that much more challenging.

It is also a favourite time for Diaspora politicians to issue messages to Jewish communities. In many cases, these congratulatory sentiments although well-intentioned completely miss the mark and instead stick to politically safe themes. That is why I intend to point out some possibly inconvenient lessons which our Festival of Lights should remind us of during these days.

If we look closely at what Chanukah is all about we should be able to see that it is something more than food and oil. The Syrian Greeks had an agenda which resonates even today. It was the denial of Judaism and the negation of Jewish sovereignty in our ancestral homeland.

How did they go about achieving these goals?

On the one hand, they attempted to seduce the Jews into abandoning their faith and assimilating into the prevailing Hellenistic culture. This approach was geared to appeal to the masses that were looking for acceptance by the majority pagan society. Opposing this approach were those Jews who could see that abandonment of their religion would inevitably lead to total disappearance not only of their religion but also to any sort of national identity and attachment for the land promised to their ancestors. These two diametrically opposite viewpoints could not co-exist and therefore there had to be at some stage a violent confrontation.

On the other hand, the Syrian Greeks, once they realized that there was serious opposition to their plans, proceeded to implement laws which were designed to eradicate both sovereignty and the religious foundations upon which that independence rested. Apart from pagan defilement of the Temple and other such sacrilegious acts the final straw was undoubtedly the banning of Brit Mila (circumcision). We all know by now of course how the story finally developed and ended and that after all is the essence of this Festival.

Current successors to the Syrian Greeks of that time unsurprisingly employ identical tactics in order to achieve their nefarious aims. They include attempts to ban Brit Mila, Shechita and other aspects of Jewish observance. Concurrent with attacks on Judaism we witness an increasing trend of verbal and physical violence against Jews in the media, civil society, universities and schools and against communal buildings and Synagogues. Hand in hand with all this is the rising crescendo of attempts to delegitimize, demonize and eliminate Jewish sovereignty in our re-established homeland.

In case you think that I am somewhat exaggerating the threats we face, study these contemporary examples.

Campaigns to ban Brit Mila have so far failed but Scandinavian countries, in particular, continue in their efforts to prohibit this fundamental practice of Judaism.

Assimilation on a scale not seen since Hellenistic times is now threatening communities in many parts of the world. A recent op-ed by an American progressive Rabbi lauding and applauding those Jews who have Xmas trees in their homes illustrates the extent to which this alienation has taken hold, especially in the USA.

At a hotel in Bethlehem, a manger scene has been depicted against a backdrop of the security barrier which is shown pierced by a mortar shell in the form of a star. In case onlookers don’t get the message the title displayed reads “scar of Bethlehem.” The irony, of course, is that if baby Jesus would be born there today he would be accused by the UN of being a Jewish “settler.” On the other hand given the current Orwellian revisionist assertions of Abbas and colleagues they would declare he is a Palestinian Moslem.

The Presbyterian Church of the USA on the other hand has no doubts about the Jewish connection to Israel. At their 2018 General Assembly, they labelled it as a “colonial project.” To make things clearer there is also an assertion circulating in mainline Protestant circles that Israel today is not the equivalent of the Old Testament nation. In other words Jews today are not the descendants of those to whom the Land was originally promised. This replacement theology therefore logically postulates that there is no legitimate Jewish State, a position which ties in very neatly with Islamic revisionists of history.

The Syrian Greeks tried everything to deny Jewish sovereignty. They are being emulated by their 21st. century successors.

Erdogan, the aspiring Ottoman sultan, has recently stated: “we today face a Palestine on the streets of which innocent girls, fathers, mothers, elderly people, children and young people are openly executed mercilessly and murdered by Israel.”

Fatah officials from the ruling PA proclaimed: “we won’t relinquish a grain of soil from the land of historical Palestine, from the (Mediterranean) sea to the (Jordan) river. We are at the beginning of an ongoing confrontation – Israel (and Jews) will leave as other invaders have.” These are the “peace-loving” partners we are urged to embrace.

Luxembourg is pushing the EU to recognize “Palestine.”

Bernie Sanders says Bibi is racist and the USA needs to level the playing field. Joe Biden asserts that constant pressure must be applied for a two-state solution. Elizabeth Warren and other Democrats want to punish us. Hamas has once again proclaimed that “the battle against Jews in the West Bank (Judea and Samaria) must escalate.”

The UN Committee on the Elimination of Racial Discrimination announced that it is “reviewing Palestinian claims of Israeli apartheid.”

Joining this all-encompassing “mutual admiration society” and just in time for Chanukah the International Criminal Court announced that there is a “basis” for investigating Israeli “war crimes.” As a leading professor on international law succinctly responded: “The ICC ignores international law by inventing a Palestinian state that does not exist and creates a crime that no one in international law has ever been charged with before: the crime of people living in places.”

One cannot escape the conclusion that nothing much has changed since the days of the Maccabees. We survived the Greeks and others and no doubt we will also overcome today’s foes.

This short video courtesy of JTV sums it up best.