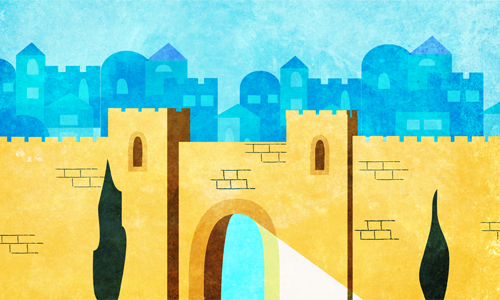 Tenth of Tevet (Hebrew: עשרה בטבת‎, Asarah BeTevet), the tenth day of the Hebrew month of Tevet, is a fast day in Judaism. It is one of the minor fasts observed from before dawn to nightfall. The fasting is in mourning of the siege of Jerusalem by Nebuchadnezzar II of Babylonia—an event that began on that date and ultimately culminated in the destruction of Solomon’s Temple (the First Temple) and the conquest of the Kingdom of Judah (today the southern West Bank).

The day has no relationship to Hanukkah, but it happens to follow that festival by a week. Whether the 10th of Tevet falls 7 or 8 days after Hanukkah depends on whether the preceding Hebrew month of Kislev has 29 or 30 days in the relevant year.

According to II Kings,[2] on the 10th day of the 10th month (Tevet)[note 2], in the ninth year of Zedekiah’s reign (588 BCE), Nebuchadnezzar, the Babylonian king, began the siege of Jerusalem. 18 months later, on the 17th of Tammuz at the end of the eleventh year of Zedekiah’s reign[note 3] (586 BCE), he broke through the city walls.[3] The siege ended with the destruction of the Temple three weeks later, on the 9th of Av (Tisha B’Av), the end of the first Kingdoms and the exile of the Jewish people to Babylon. The Tenth of Tevet is thus considered part of the cycle of fasts connected with these events, which includes Shivah Asar B’Tammuz (17th of Tammuz) and Tisha B’Av (9th of Av).

The first reference to the Tenth of Tevet as a fast appears in the Book of Zechariah,[4] where it is called the “fast of the tenth month.” One opinion in the Talmud [5] states that the “fast of the tenth month” refers to the fifth of Tevet, when, according to Ezekiel,[6] news of the destruction of the Temple reached those already in exile in Babylon. However, the tenth is the date observed today, according to the other opinion presented in the Talmud.[7] Other references to the fast and the affliction can be found in the books of Ezekiel (the siege)[8] and Jeremiah.[9][10]

According to tradition, as described by the liturgy for the day’s selichot, the fast also commemorates other calamities that occurred throughout Jewish history on the tenth of Tevet and the two days preceding it:

As with all minor Jewish fast days, the Tenth of Tevet begins at dawn (alot ha-shahar) and concludes at nightfall (tzeit hakochavim). In accordance with the general rules of minor fasts as set forth in the Shulchan Aruch,[13] and in contrast to Tisha B’Av, there are no additional physical constraints beyond fasting (such as the prohibitions against bathing or of wearing leather shoes). Because it is a minor fast day, Halacha exempts from fasting those who are ill, even if their illnesses are not life-threatening, and pregnant and nursing women who find fasting difficult.[14] The Mishnah Berurah notes that it is still commendable to observe all the restrictions of Tisha B’Av on the minor fast days (except the restriction of wearing leather shoes). Even so, it says, one should not refrain from bathing in preparation for Shabbat when the Tenth of Tevet falls out on a Friday.[15]

A Torah reading, the Aneinu prayer in the Amidah, and the Avinu Malkeinu prayer are added at both Shacharit and Mincha services in many communities, unless the fast falls on Friday, when Tachanun and Avinu Malkeinu are not said at Mincha. At Shacharit services, Selichot are also said, and at Mincha, in Ashkenazic congregations, the Haftarah is read.[16]

The Tenth of Tevet is the only minor fast day that can coincide with Friday in the current Jewish calendar. When it does, the unusual event of a Torah and Haftarah reading at the Mincha service right before Shabbat takes place. This is fairly rare; the most recent occurrence was in 2013, while the next will happen in 2020. If it falls on Friday, the fast must be observed until nightfall, even though Shabbat begins before sunset (up to 72 minutes earlier, depending on the halachic authority), and even though this requires one to enter Shabbat hungry from the fast, something typically avoided.[citation needed] It cannot be determined for sure whether other fasts would have the same ruling, because no other fast day can fall out on Friday.[note 4]

Although this fast is considered a minor fast, the Abudirham attributed to it an additional theoretical stringency not shared by any other fast except Yom Kippur, namely that if the Tenth of Tevet were to fall out on a Shabbat, this fast would actually be observed on Shabbat. (This cannot happen under the current arrangement of the Hebrew calendar.) The reason the fasts of the Tenth of Tevet and Yom Kippur must be observed on the actual day on which they occur is because of the phrase “the very day” (עצם היום הזה) is used in reference to both of them, in Ezekiel 24:2[17] in reference to the Tenth of Tevet, and similarly for Yom Kippur in Leviticus 23:28.[18] This view is rejected by the Beit Yosef and all other major halakhic authorities, but was popularized by Rabbi Moses Sofer, who wrote a homily based on the philosophy behind this view.

Day of general kaddishThe Chief Rabbinate of Israel chose to observe the Tenth of Tevet as a “general kaddish day” (yom hakaddish ha’klalli) to allow the relatives of victims of the Holocaust, and whose yahrtzeits (anniversaries of their deaths) is unknown, to observe the traditional yahrtzeit practices for the deceased, including lighting a memorial candle, learning mishnayot and reciting the kaddish. According to the policy of the Chief Rabbinate in Israel, the memorial prayer is also recited in synagogues, after the reading of the Torah at the morning services.[20][21] To some religious Jews, this day is preferable as a remembrance day to Yom HaShoah, since the latter occurs in the month of Nisan, in which mourning is traditionally prohibited.