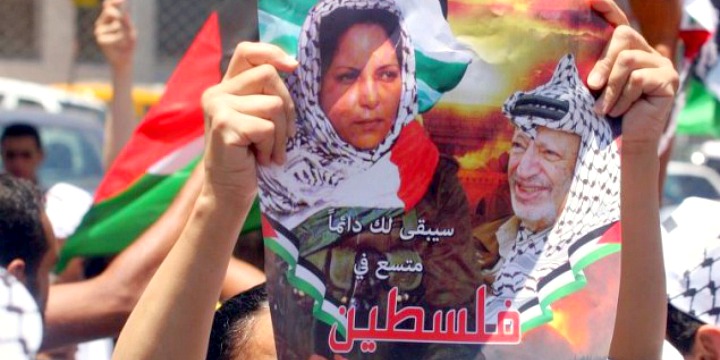 There was a small kerfuffle this weekend as stories came out that the official Palestinian fifth grade textbook for teaching the Arabic language mentioned how great Dalal Mughrabi was — but used the wrong photo of her.

Our Palestinian history is replete with many martyrs who sacrificed their souls for the homeland. One of them is the martyr Dalal Mughrabi, who produced an image of defiance and heroism through her struggle. This made her memory eternal in our hearts and minds. The text before us tells a part of her history of struggle.

Mughrabi is the terrorist responsible for the Coastal Road Massacre that killed 38 people, including 13 children.

Some people are saying that this is a photo of another female Palestinian terrorist, Teresa Halaseh. But either way — Palestinian textbooks glorify terrorists. Period.

The Daily Mail also reported on terrorist incitement in Palestinian textbooks used by UNRWA schools funded by the UK (and others):

The Daily Mail has discovered that tens of millions of pounds of UK foreign aid is helping fund schools in Gaza and the West Bank that use such material in lessons.

The money goes via a UN agency that some other nations have chosen to stop financing because of concerns.

The textbooks include a reading exercise for six-year-olds with the words “martyr” and “attack,” plus poems for eight-year-olds which include phrases such as “sacrifice my blood” to “eliminate the usurper from my country” and “annihilate the remnants of the foreigners.”

Nine-year-olds learn maths by adding the number of martyrs in Palestinian uprisings in textbooks illustrated with pictures of their funerals.

And ten-year-olds learn the most important thing is giving their life for “sacrifice, fight, jihad, and struggle.”

Elder of Ziyon has been blogging about Israel and the Arab world for a really long time now. He also controls the world, but deep down, you already knew that.