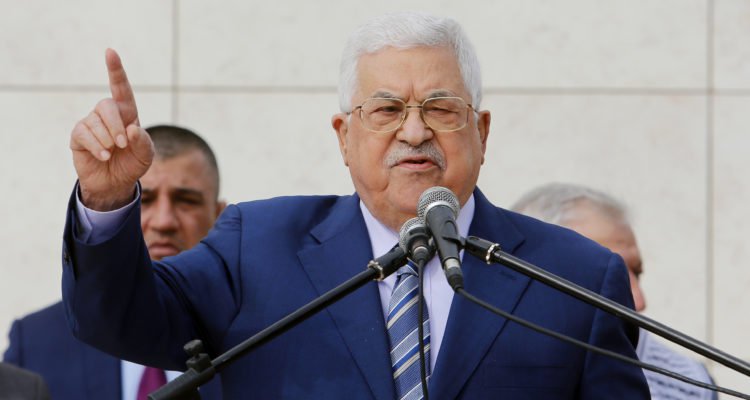 Mahmoud Abbas reacted swiftly and clearly. Immediately following President Donald Trump’s presentation of the American “Peace to Prosperity” plan on January 28, he stated in a press conference in Ramallah: “We say a thousand times: ‘No, no, no, to the ‘Deal of the Century’…. Our people will send [it] to the garbage bin of history, where all the conspiratorial plans to eliminate our cause have gone.”

Abbas’ vehement objection to the American move is understandable, as it represents a concrete withdrawal from some major components of proposals made by the U.S. and Israel over the last 20 years in attempt to attain a peace agreement between the parties. But the fact is that none of these proposals brought about the hoped-for accord. Hence, as a reality check, it is worth revisiting the PLO’s reaction to the last Israeli proposal, presented by the prime minister of Israel at the time, Ehud Olmert, to Mahmoud Abbas on September 16, 2008, a proposal that went even further than the compromise proposed by U.S. President Bill Clinton in 2000, which was accepted by then-Israeli prime minister Ehud Barak.

The main points of Olmert’s proposal were the following: (1) Israel would cede 97 percent of the territory of Judea and Samaria (According to Abbas, The Washington Post, May 31, 2009). In addition, land-swaps with Israel would ensure that the area under PLO sovereignty would be equal in size to the area that was under the control of Egypt’s (the Gaza Strip) and the Hashemite Kingdom of Jordan (Judea and Samaria) in June 1967. It should be noted that the Gaza Strip was already under Hamas control at the time of this proposal. (2) A “safe passage” route under PLO control would connect Gaza to Judea; (3) Jerusalem would be divided into two capitals, one under Israeli sovereignty and another under PLO sovereignty; Israel would cede its sovereignty over the Temple Mount, the Mount of Olives and the City of David, which would be jointly administered by Saudi Arabia, Jordan, the PLO, the United States and Israel (Points 2-4 were related by Olmert in a November 28, 2009 interview with The Australian); (5) About 5,000 refugees would be admitted to Israel over a five-year period, on the basis of personal-humanitarian considerations, rather than “the right of return” or “family unification”; (6) The PLO would sign its commitment to “an end of conflict and end of claims” (Points 5-6 were related by Olmert in a January 17, 2012 talk at the MEMRI Forum).

In contrast with some learned views, Mahmoud ‘Abbas rejected this proposal, as Ehud Olmert wrote clearly a year later in a Washington Post op-ed: “To this day, I cannot understand why the Palestinian leadership did not accept the far-reaching and unprecedented proposal I offered them… It would be worth exploring the reasons that the Palestinians rejected my offer and preferred, instead, to drag their feet, avoiding real decisions.”

In her 2012 memoir “No Higher Honor,” former Secretary of State Condoleezza Rice revealed that in the summer of 2008 she had suggested that Olmert’s proposal, and Abbas’ acceptance of it, be secretly put on record – but Abbas refused. When he came to Washington in November 2008 to say goodbye to President Bush, “the president took Abbas into the Oval Office alone and appealed to him to reconsider. The Palestinian stood firm, and the idea died,” she wrote.

Since 2008, the PLO leadership has insisted that renewed negotiations with Israel on a permanent agreement must start where negotiations with Olmert left off. Abbas recently reiterated this position in a February 11, 2020 joint press conference with Olmert in New York, where he declared that he was “fully” ready to resume negotiations from that point. A week later, an official close to Abbas clarified the intention behind this statement. He divulged that, during a meeting held before the press conference, Olmert had once again urged Abbas to agree to his plan, in order to thwart Trump’s peace plan. But Abbas refused, indicating that issues related to the border, Jerusalem and refugees still needed to be discussed and negotiated before the Palestinians could approve of the plan (Al-monitor.com, February 17, 2020). The PLO leadership is therefore still signaling its unwillingness to accept even Olmert’s far-reaching proposal, and thus, realistically, any conceivable proposal for a permanent agreement with Israel.

This refusal by the PLO stems from its denial of any historical affinity of the Jewish people to the Land of Israel as well as on rejection of the very existence of a Jewish nation, defining Judaism as a religion only, that is not entitled to the national right to establish and maintain a state. On August 13, 2009, the PLO’s main faction, Fatah, published the resolutions of its sixth congress in Bethlehem, including “an absolute objection, which cannot be withdrawn, to recognizing Israel as a ‘Jewish state’, [and this] in order to protect the rights of the refugees and the rights of our people beyond the Green Line [i.e., the Arab citizens of Israel].”

More recently, the seventh Fatah congress, held in December 2016, endorsed this resolution, the practical significance of which was later explained by Hafez Al-Barghouti, editor of the Palestinian Authority daily (Al-Hayat Al-Jadida, July 7, 2012): “We still strive [to gain] the homeland, outside and inside, and we shall never despair.” The common expression “Inside” means within the area delineated by the armistice demarcation line of 1949, that is, the area of the State of Israel.

Indeed, according to Article 20 of the 1964 Palestinian Covenant, “The Balfour Declaration, the Mandate for Palestine, and everything that has been based upon them, are deemed null and void.” And so, even 22 years after the ceremony in which the covenant was “abolished,” the PLO continues to consider the Balfour Declaration a source of continuous injustice that has been done to the Palestinians. It is in this spirit that in his article marking the centenary of the declaration titled “The Burden of Lord Balfour” (The Cairo Reviews of Global Affairs, November 17, 2017) Abbas wrote: “Lord Arthur Balfour was a British foreign secretary who decided to change the identity and fate of Palestine, a land that he did not own, by promising it to the Zionist movement, and dramatically altering the history of the Palestinian people… The Balfour Declaration of 1917 symbolizes the international role in the Palestinian catastrophe and exodus, the Nakba of 1948.”

In that article Abbas also proposed a solution to the refugee issue: “We also reiterate that, in order to end claims with Israel, there must be a just solution for the seven million Palestinian refugees based on the choice of every refugee,” i.e., his choice between returning to his family’s original home in Israel and accepting financial compensation.

The meaning of this permanent demand is that the PLO is not authorized to represent the will of each individual refugee, and hence the PLO is unable to agree with the Israeli government on any quota of refugees that would be allowed to settle in Israel. Hence, the PLO is unable to include in any agreement the vital component of “mutual end of claims.” This barrier is in addition to the PLO’s ongoing claim to the entire territory of Israel, a demand on which organization still educate its youth.

The new American “Peace to Prosperity” plan implicitly anticipates that, within the next four years, the PLO leadership will return to the negotiation table. In order to avoid future mistakes, we must abandon the erroneous theory that “the PLO is the solution.” We must not close our eyes to the simple fact that, for the PLO, the core issue is the hundred-year-old “injustice” embedded in the very existence of Jewish sovereignty in any part of Palestine. This gap cannot be bridged, and no plan that any Israeli government can accept can also satisfy the PLO. Therefore, a peace treaty with the PLO cannot and will not be signed.