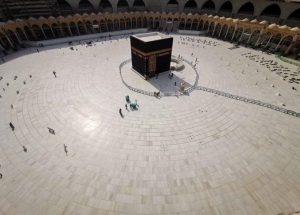 EXECUTIVE SUMMARY: The coronavirus pandemic caught the Western world unprepared despite all the technology and medical advances available in those countries. What about Iran and the Arab world? How are they coping? These dictatorial states know how to control their populations and suppress both information and unrest, but appear for the most part to have no idea how to fight an invisible virus.

Just as Italy is the source of much of the spread of the virus in the Western world, Iran has been the source of most of the infections in the Arab world. Almost every single case in Iraq, Syria, and Lebanon originated in Iran.

The Iranian regime has no idea how to contain the epidemic. The country has dealt with earthquakes, wars, and revolutions, but is finding it impossible to cope with the rapid spread of the coronavirus.

Photos and videos of night-time burials and dead people lying in the streets are going viral on Arabic social networks.

Ten members of the Iraqi parliament have been infected with the virus. People tracking its spread in the Arab world say only Saudi Arabia has succeeded in dealing with the outbreak and preventing widespread infection among its population.

Some Arab countries simply deny the existence of the virus. Dozens of people have returned infected to Cairo on flights from the US and Europe, but the Egyptian government continues to insist that there are no coronavirus cases in the country, classifying anyone with symptoms as suffering from “normal influenza.” Egypt has yet to cancel flights arriving from China, unlike most countries of the world. Even after the Egyptian health minister traveled to China to learn about the new virus, deaths linked to it continued to be defined as lung infections.

Saudi Arabia has managed to prevent a serious local outbreak by closing its borders and barring flights from Lebanon, Egypt, Algeria, and Iraq. Iraq has yet to close its border with corona-infested Iran. Lebanon, too, is still running commercial flights to and from Iran, though it was the source of Lebanon’s first cases.

Stories are quietly circulating that many Iranian Revolutionary Guards are escaping to Lebanon with their families to avoid contamination and get medical attention. Lebanon has become a dumping ground for Iran’s sick and fearful.

In the Palestinian Authority, the entire city of Bethlehem is under curfew following the infection of seven local residents, apparently through contact with a group of Greek tourists who were later found to have been infected. No one is allowed to enter or exit the city. Residents of Bethlehem are panicking and hoarding foodstuffs, causing a serious shortage of groceries. A city that was bustling just a short time ago now looks like a ghost town.

A hotel in nearby Beit Jala is packed with infected Palestinians who are being held in isolation along with 15 infected American tourists. It is estimated that thousands of individuals might be carrying the virus throughout the Palestinian Authority-controlled territories.

Meanwhile, countries like Jordan and Egypt are censoring publication of the number of victims infected with the coronavirus. Videos are circulating on social media showing Egyptian authorities moving patients from place to place under cover of darkness.

Some Arab states grasped the danger inherent in the virus and began taking steps early to prevent its spread by closing borders and barring flights from China, Thailand, South Korea, and Italy. Others are isolating suspected carriers or those who were in contact with a carrier and preventing large gatherings, including mass prayers on Fridays. For the first time in modern history, Saudi Arabia has shut down the holy places in Mecca.

Other Arab states, however, are suppressing and distorting information and denying that the problem exists within their borders. This can have extremely grave consequences, not only for the states themselves and their populations but for the entire region.

This is an edited version of an article that appeared in Israel Today on March 11, 2020.

Dr. Edy Cohen (Ph.D. Bar-Ilan University) is fluent in Arabic and specializes in inter-Arab relations, the Arab-Israeli conflict, terrorism, Jewish communities in the Arab world. He is a researcher at the BESA Center and author of the book The Holocaust in the Eyes of Mahmoud Abbas (Hebrew).