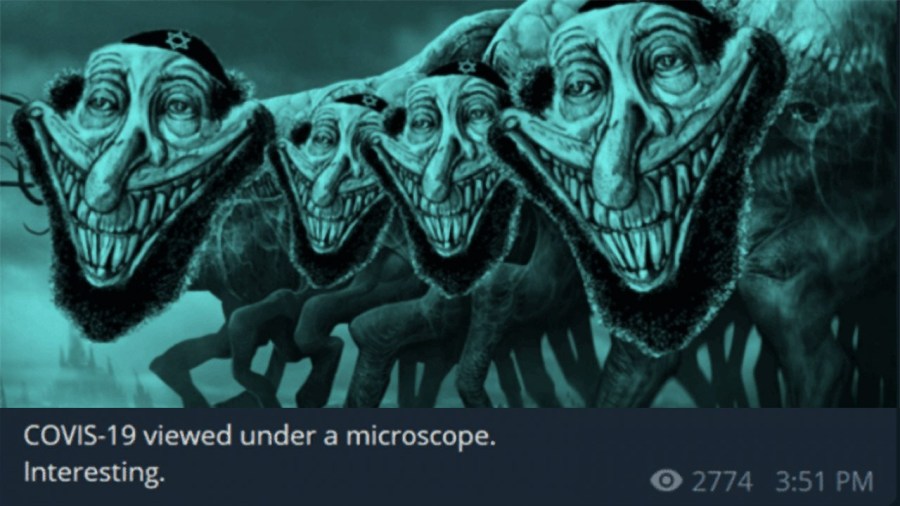 The COVID-19 virus has already claimed thousands of lives across the globe. Unsurprisingly, it has also fanned anti-Semitism. Today, as the long and bloody history of Jew-hatred has shown, anti-Semites, Israelophobes, and BDS crusaders have wasted little time exploiting the coronavirus pandemic to spread corona conspiracies against the Jewish state.

Anti-Semitic conspiracy theorists are operating in a vacuum. Readily accessible facts on the ground undermine their claims. The metastasizing spread of the COVID-19 virus in Israel has brought Jews and Arabs, Israelis and Palestinians, to increase medical and humanitarian cooperation to fight the pandemic. Israel’s Prime Minister Benjamin Netanyahu has held consultations with Israeli Arab physicians. He has dispatched urgent medical testing equipment to the Palestinian Authority.

Netanyahu noted, “It (coronavirus) does not distinguish between Jews, Arabs, Circassians, Bedouins, and Christians. It does not distinguish between religions and sectors.” Since March 19, the Israeli government has sent hundreds of coronavirus testing kits to the Palestinian Authority and Gaza as well as 2,000 protective suits, twenty tons of disinfectants, and 100 liters of sanitizing gel. Israeli doctors and specialists have also been dispatched to the West Bank city of Jericho to train Palestinian medical teams to save lives in combating the coronavirus pandemic.

Palestinian Authority officials Ahmed Deek and Hussein al Sheikh, responsible for cooperation between the PA and Israel, praised Israel’s assistance, particularly the Israeli government’s honoring of the PA’s request to provide accommodations in Israel for 45,000 Palestinian worker-commuters from the West Bank to reduce the risk of coronavirus infection. According to Al Monitor, quoting the PA’s al Sheikh, Israel’s President Reuven Rivlin phoned PA President Mahmoud Abbas to thank him for the high level of cooperation and coordination.1

Israeli measures to protect Israeli Arab citizens and residents, including the Israeli Health Ministry’s detailed instructions in Arabic,2 did not prevent BDS South Africa’s leadership from delivering its regular diet of mendacious and conspiratorial accusations against Israel, as part of its 2020 annual “Israel Apartheid Week.” On March 19, Mohammed Desai, BDS South Africa’s founder and chief evangelist, charged Israel with refusing to issue vital life-saving instructions in Arabic to Arabic speaking citizens and residents of the Jewish state. However, Desai’s false accusation was exposed on the spot by the TV debate’s other guest, Israeli Arab Yoseph Haddad, who called out a shocked Desai as a “liar” on South African national television.3

Desai’s fabrication was echoed by Ronnie Kasrils, an outspoken Jewish South African BDS activist, a professed communist member of the African National Congress, and a leading adversary of the Jewish state. Kasrils declared to the South African Daily Maverick, “Israel…only delivers its coronavirus advice in Hebrew, ignoring the Arab mother tongue of 20 percent of Palestinians living within the Zionist state.”4

Historically, Jews have been blamed and massacred during global pandemics, from poisoning well water during the bubonic plague in 1348, to infecting the air in Freiberg, Germany, half a century later. In 1942, Polish-language Nazi propaganda accused Jews of spreading typhus.6 The 1953 Soviet “Doctors’ plot” resulted in the arrest of hundreds of Russian Jews. Historian Walter Lacquer noted that “similar charges were made in the 1980s and 1990s in radical Arab nationalist and Muslim fundamentalist propaganda that accused the Jews of spreading AIDS and other infectious diseases.”7

The coronavirus pandemic is no exception. Social networks have multiplied Jewish conspiracy theories such as “Jews are making money off the virus”: from the vaccine, by exploiting market volatility, or through loans, branding Jews as the “happy merchant.”8

What is different today is that anti-Jewish coronavirus conspiracies have targeted the Jewish state. However, according to some U.S. groups including the ADL, some of these anti-Israel assaults constitute “political criticism” of Israeli policies and therefore may not fall under the definition of anti-Semitism. However, the ADL’s own revelations have not supported its disclaimer. It revealed Twitter and Facebook posts depicting a Palestinian woman’s forced exposure to the coronavirus while an Israeli soldier points a gun in her direction.9

On March 22, Code Pink’s Ariel Gold tweeted: “International Law: Israel is culpable for every coronavirus death in Gaza.” On March 23, she added, “Israel and the U.S. are culpable for every coronavirus death in Gaza: the Siege must be lifted.” David Duke tweeted a statement that pondered if President Trump had been infected by the coronavirus, and whether Israel and the “Global Zionist elite” were behind it.10

The Nation of Islam’s Research Group, a division of the Black Muslim organization headed by the proudly anti-Semitic Louis Farrakhan, tweeted a message indicating that Israel may have developed COVID-19 as a weapon “in response to news that an Israeli research institution will announce a coronavirus vaccine.”11 A Turkish television station that serves as a mouthpiece for President Erdogan issued a similar message, saying, “Jews, Zionists have organized and engineered the novel coronavirus as a biological weapon just like bird flu” to “seize countries and neuter the world’s population.”12 Iranian regime leaders similarly accused Israel of spreading the virus as a “Zionist biological terrorist attack.”13

The spike in Israelophobic rhetorical assaults against the Jewish state has even sent shock waves across leading Jewish anti-Zionist groups, such as If Not Now. INN responded to the recent spate of anti-Jewish conspiracy theories by tweeting on March 22:

This is outrageous. While Jews around the world are struggling like everyone else to cope with the #coronavirus, we are also being bombarded by this anti-Semitic filth. Where are our interfaith allies? We’re here for you. And we need you here for us.14

Coronavirus conspiracy theories by BDS and other groups are the latest indications that little has changed in the centuries of anti-Semitic invective against Jews, and today against the Jewish state. It’s an act of self-deception to suggest, as some Jewish groups have, that this diet of propaganda and conspiracy sometimes constitutes political criticism of Israel’s policies. As Sharansky noted in the recent publication Israelophobia and the West: “History has come full circle. And just like in the good old days of Stalin, when they spoke of Zionists they meant Jews, and when they spoke against Jews they meant Israel.”15

The difference today compared to centuries past is that the State of Israel can defend itself against both physical and rhetorical assaults. It possesses the human and technological capabilities to defeat conspiracies and propaganda, as Israeli Yoseph Haddad did on South Africa’s NewZRoom Africa Television. The question is whether the Iranian regime and other self-declared enemies of the Jewish state will accept Israel’s vaccine against the coronavirus, when Israeli scientists complete their current intensive research and development of a cure and vaccine that could save millions of lives.

15 Strategic round table discussion assessing Israelophobia, Jerusalem Center for Public Affairs, March 11, 2019. This discussion formed the basis for the study, Israelophobia and the West: The Hijacking of Civil Discourse on Israel and How to Rescue It, https://jcpa.org/israelophobia-and-the-west/