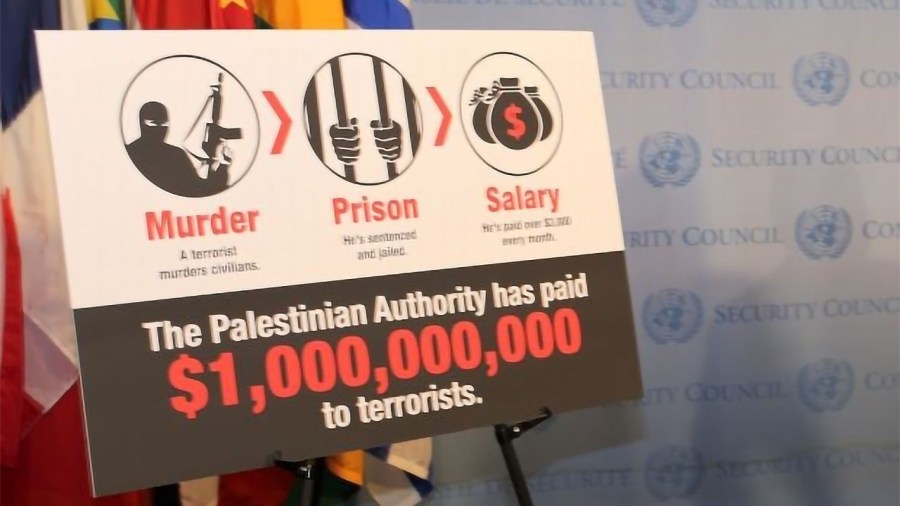 The budget expenditure information is not clear about the salaries paid to the families of the martyrs, since they are included without specifications in the social welfare transfers, together with real welfare payments.

The Palestinians keep paying salaries to all terrorists arrested in Israel and to the families of dead terrorists in spite of the growing international attention to the “Pay for Slay” phenomenon that is evident from the following:

Israel keeps implementing the steps taken against the PA in the context of the Stern-Dichter law that was adopted in 2018. The law ordered Israel to deduct every month from the taxes it collects for the PA and transfers to it, one-twelfth of the amount the PA paid as salaries to arrested terrorists and to families of dead terrorists in the previous year. After the law came into force, Israel’s Security Cabinet decided in February 2019 to deduct 41.8 million shekels each month in 2019 (one-twelfth of the 502 million shekels paid by the PA as salaries to incarcerated terrorists in 2018), as these were the only figures the Ministry of Defense was able to provide. The cabinet ordered the MOD to provide further information about the payments to the families of dead terrorists, and towards the end of 2019 the MOD reported that these payments amounted to 148 million shekels, and one-twelfth of this sum has to be deducted as well.

The Palestinians protested the decision and refused to accept any payment as long as the deduction is implemented, but eventually reached an agreement with the Israeli government and resumed receiving the taxes. The details of the deal remain a secret. Nevertheless, even though more than two months have already elapsed in 2020, the Israeli Cabinet has not yet held a discussion about the implementation of the deduction law in 2020, which may mean that no deduction took place in January and February.

Following the outbreak of the coronavirus, the PA asked Israel to deliver the withheld funds (650 million shekels, according to Palestinian sources). This request was refused, but instead, on March 22, Israel transferred to the PA 120 million shekels of arrears, whose status had been disputed. Clearly, if the PA lacks the financial resources to combat the epidemic, they can stop paying salaries to terrorists.

The law is implemented by the Ministry of Finance, but the preparation of the data and many additional activities are performed by the relatively new National Bureau of Counter-terror Financing at the Ministry of Defense. The bureau is headed by advocate Paul Landes, formerly the head of the Israel Money Laundering and Terror Financing Prohibition Authority at the Ministry of Justice. In addition to following the PA payment of salaries to terrorists, the bureau issues decrees authorizing the confiscation of the money paid as salaries through the banking system to Israeli citizens and Jerusalem residents. So far, about 350,000 shekels have been confiscated from accounts or from funds prisoners received in prison.

Some lessons can be learned from the 2019 experience with payments to Palestinian terrorists:

More countries should follow the United States by conditioning their aid to the PA on abrogating the PA law according to which these payments are made and stopping the practice of “pay for slay.” If European donors adopt this policy, the chances increase that something will change.