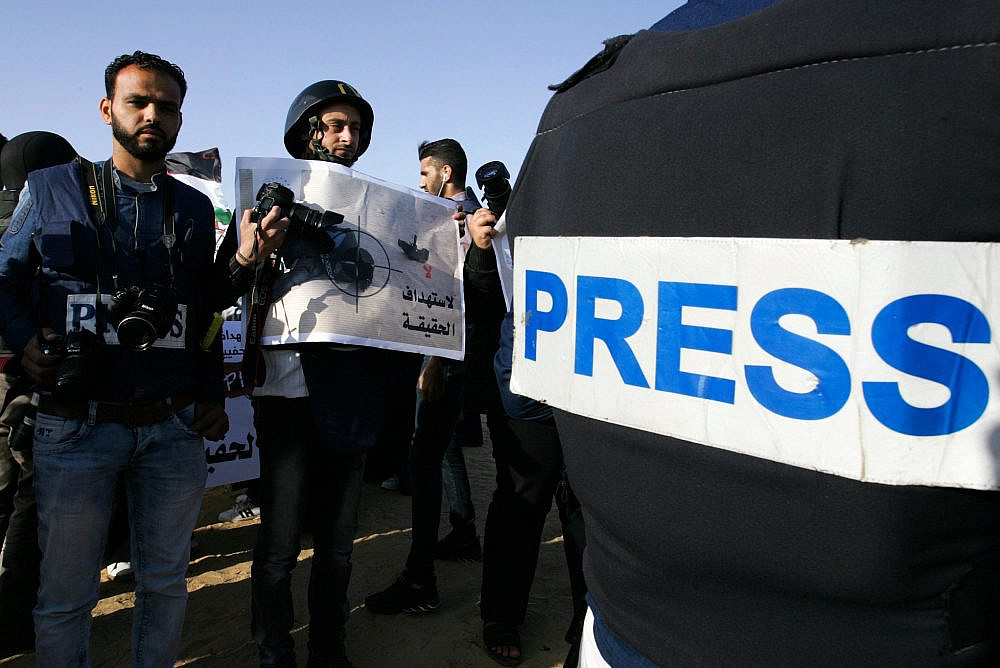 Israel is actively involved in helping the Palestinian Authority deal with COVID-19. Yet, it would be impossible to glean that fact from the PA’s radio and television broadcasts. Quite the opposite, in fact. Monitoring of these and other communications reveals not only silence regarding Israel’s ongoing and intensive assistance to the PA in battling COVID-19, but a total lack of recognition of the State of Israel, which is referred to as, variously, “the other side” “the State of Conquest,” “the Racist State,” and an “atrocity”. Moreover, in terminology that teeters perilously close to anti-Semitism, Israel is being accused in these communications of deliberately spreading the virus, and is itself described as a virus.

Prior to the Jewish holiday of Passover, Ma’an News Service, an affiliate of the mainstream Palestinian media, circulated a report that workers who baked matzah in the Atarot industrial area had infected the village of Bani Na’im, near Hebron, with COVID-19.

In fact, for the past six weeks, the PA has alleged that Israel is spreading the virus through workers in Israeli matza factories.

This is nothing but a new take on the traditional Passover blood libel.

According to the PBC radio, “After the Palestinian Ministry of Health announced that four workers were affected by the Coronavirus from the town of Bani Na’im, it became clear that the injury came as a result of the fact that they interfered with a Jewish practice when they worked at a Passover matzah factory, which Jews often eat on this holiday according to their religious traditions.”

Already in 2010, the Palestinian Authority launched an official info war against Israel in what has been called the “Popular Intifada,” or the “Peace Intifada”. In March 2019, Dr. Mohammed Shatiya became PA prime minister, and this propaganda offensive against Israel intensified significantly.

Consider, for example, the following remark made by Dr. Shatiyah on 22 September 2019, at the dedication of the “War on of the Cancer War Institute” in Ramallah: “The chemical and nuclear wastes of the Israeli conquest are the major cause of some of the diseases, especially cancer. The number of cancer patients in our country is relatively high compared to the neighboring countries because Israel uses our land as a landfill and sues them for this crime.” Following pressure from the European community on the PA to cooperate with Israel on the eve of the COVID-19 crisis, Prime Minister Shatiya, who had recently accused Israel of causing cancer among Palestinians, has appeared to hold back from directly accusing Israel of spreading the virus.

Nonetheless, after a social media clip showed an Israeli soldier spitting on a Palestinian vehicle in Hebron, Shatiya made the following statement: “We have seen some of the soldiers trying to spread the virus, and this is due to racism and hate education. And they long for the death of others.”

Beyond the PA prime minister, too, the Palestinian blood libel of Israeli COVID-19 spread is alive and well.

The PA’s official line is that Israelis are, by nature, COVID-19 bearers. Such an official description readily recalls the Nazi narrative of the Jews as disease- spreaders. Thus, for example, following arrests made by the IDF in Ramallah, the Ramallah Municipality employees traced the soldiers’ track to disinfect it from the virus.

Municipality of Ramallah disinfects the route of IDF soldiers

According to Mahmoud al-‘Alul, Abu Mazen’s deputy in Fatah, “On the front lines of COVID-19, a wizard prioritizes the fight against the occupation because the racial conquest seizes the opportunity of the entire world being busy with the plague in order for the Zionists to increase their aggression against the Palestinian people, even through sewer pipes.”

The word in the official Palestinian media is that returning workers from Israel are maliciously spreading COVID-19 in the “PA territories”. This allegation had incensed the workers and their families, according to the head of the Nablus-based trade unions, Shar Sa’ad,

A special session was held between Sa’ad and Prime Minister Shatiya on this issue. The PA media did not report on the contents of the meeting, but sources in Nablus say that Shar Sa’ad demanded that Shatiya cease accusing PA workers of spreading the disease.

Following the meeting, Shatiya declared: “I beg [you] not to hurt the workers. They are our children, and they work for their children’s bread.”

Shatiya’s propaganda message against PA laborers working in Israel aims to promote his well-known policy of cutting off all economic ties with Israel – despite the heavy price paid by the Palestinians, including Palestinian laborors in Israel and industrial areas.

Additionally, the PA is claiming that Israel is exposing its jailed Palestinian convicts to COVID-19, and that it is releasing sick prisoners to infect their communities with the disease.

Ali Maghrabi, a spokesman for the Palestinian convicts  ‘and detainees’ organization, hinted to the Turkish news agency that an official Israeli COVID-19 plot was behind the release to his family of a convict named Nur a-Din Sarsor, who was incarcerated in an Israeli prison as a healthy person and thereafter fell ill with the virus. The spokesman for the organization linked the source of the virus to prison guards; according to the Palestinian media, Israelis carry the disease and actively seek to spread it.

It is worth noting that the government of Israel lent its frequencies to the PA television, radio and internet for peace and coexistence purposes, in accordance with the Oslo 2 agreement. In 2012, MK Uri Orbach and MK Yariv Levin introduced an ordinance to cut off the Israeli frequencies from the PA. The law never came to a vote because of elections that were held in 2013.  Although Orbach has since passed away, Yariv Levin is now set for a senior position in the new government. In light of the COVID-19 blood libel spread by the PA, it is reasonable to expect that Levin will work to cut off the PA media frequencies.