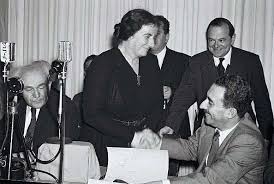 Issued in the midst of a sustained attempt by the Palestinian Arabs to destroy it at birth, Israel’s 1948 declaration of independence urged them “to participate in the upbuilding of the state on the basis of full and equal citizenship and due representation in all its provisional and permanent institutions.”

The invitation to these inveterate foes to be fellow citizens was based on the belief that once their aggression had been defeated, they would resign themselves to a minority status in the nascent Jewish state.