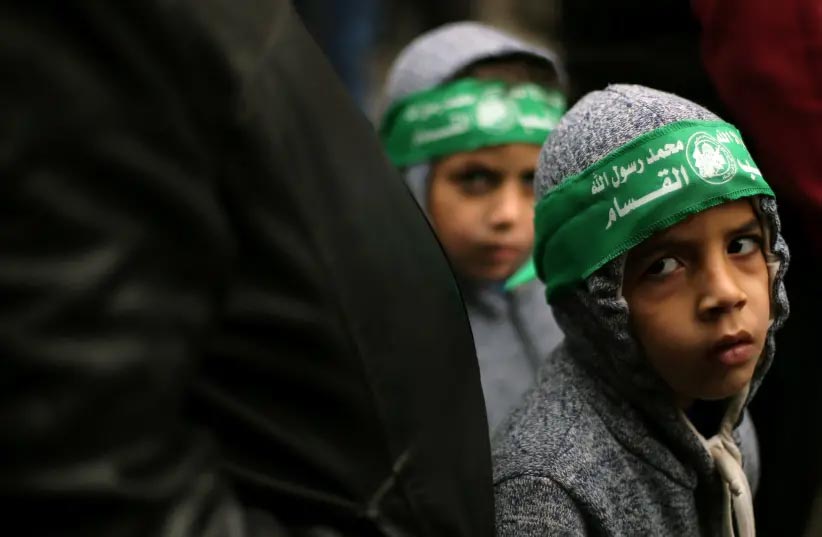 Palestinian children are being systematically taught to hate Jewish Israelis and violently resist a Jewish presence in Israel, a comprehensive review of Palestinian school textbooks has found.

The study, by Dr. Arnon Gross of the Meir Amit Intelligence and Terrorism Information Center, in conjunction with David Bedein of the Center for Near East Policy Research, looked at nearly 400 school text books published between 2013 and 2020, and more than one hundred teachers’ guides, mostly published in 2018, for a greater insight into how the material was being taught.

They found three main strands of indoctrination running though the texts: delegitimization of the State of Israel’s existence, including the denial of Jewish holy sites within Israel; demonization of Israel and the Jews, who are regularly referred to as “the Zionist enemy”; and incitement to violent struggle to reclaim the whole of Israel as Palestine, with no education for peace and co-existence.

“Schoolbooks are specifically important in societies in conflict, because they indicate the narrative the leadership and society strive to instill in the minds of the younger generation,” the report notes. “The schoolbooks issued by the Palestinian Authority indicate, then, the essence of the narrative as far as the conflict with Israel is concerned.”

The narrative given within the context of Palestinian school texts is one of preparing the next generation “for a continuous and long-range confrontation against the State of Israel in order to achieve the final goal, which is the establishment of the State of Palestine that will stretch on the entire territory of the Land of Israel,” the report further notes, adding: “There is no trace in the schoolbooks of the argumentation disseminated by the Palestinian Authority in the international arena that the Palestinian Authority is committed to “a just peace” based on the two-state solution.”

This narrative of continued violent struggle against a Jewish presence in Israel has intensified since 2016, the report found, with references to the three main strands widespread throughout the curriculum. Increasingly, the schoolbooks vehemently deny the State of Israel or any Jewish connection to the land, referring to any historical links between Jews and Israel as ‘legends.’

For example, a Grade 10 textbook teaching Arabic language contained a passage reading: “…[The occupier] has built for himself an artificial entity that derives its identity and the legitimacy of its existence from tales, legends and false visions, and has tried through various methods and ways to create live material evidence for these legends, or archaeological and architectural proofs that would confirm their truth and substantiality, but in vain.”

Similarly, a Grade 3 text for a Citizenship class read: “Jerusalem is an Arab city built by our Arab ancestors thousands of years ago. Jerusalem is a holy city to Muslims and Christians,” – denying a Jewish connection to Jerusalem.

Messages such as these were not confined to classes on reading comprehension and nationalism, but found throughout the curricula, the report found, including in core subjects such as Mathematics.

One math problem set to Grade 11 students read: “One of the settlers [Israelis] shoots at [Palestinian] cars that pass on one of the roads. If the probability of his hitting a car in one shot is 0.7, and the settler shot at 10 cars, what will you expect to be the number of cars that were hit?” The answer given in the teacher’s notes was seven.

COMMENTING ON the report, Rabbi Avraham Cooper, Associate Dean, Director Global Social Action Agenda of the Simon Wiesenthal Center told The Jerusalem Post that the content of the text books effectively renders futile all attempts at a peace process between Israel and Palestine.

“Security experts draw up maps and borders, diplomats sign treaties but only people can make peace,” he said. “This exhaustive report confirms the trailblazing work of Dr. Arnon Gross and David Bedein that Palestinian children — virtually all of them — are subject not to a peace curriculum but a war curriculum, one that stokes the flames of hatred against their Jewish neighbors, denies Jewish history and Jewish Holy sites in the Land of Israel. It refuses to acknowledge any legitimacy to the Jewish state—whatever its borders may be.”

Use of the text books is mandatory in all Palestinian schools, both private and those run by the UN Relief and Works Agency. In addition, UNRWA allocates 54% of their budget to education in the Palestinian territories, which includes Judea, Samaria, and the Gaza Strip. Rabbi Cooper said there must be a demand for change from donor countries if there is to be any hope for peace.

“Another generation of children [are being] brainwashed to hate and glorify terrorist murderers,” he told the Post. “Donor nations and international agencies funding these schools must demand change from the Palestinians. Unless and until this educational model is scrapped there is no hope for any peace plan, however brilliantly crafted, if this is the narrative of hate universally imposed by Palestinian leaders upon their constituents from generation to generation.

Meanwhile, Itamar Marcus, founder and director of Palestinian Media Watch has pointed out that the difficulties with Palestinian education run much deeper than simply the school texts. “The problem of the PA schools is more fundamental than [that], he told the Post.

“The entire infrastructure of the PA schools is geared to promote terror,” he said. “The PA’s Bethlehem High School for Girls recently built a memorial at the entrance to the school honoring a 17-year-old female suicide bomber, the ‘Martyr Ayyat Al-Akhras.’ Every single day as these girls enter school they are told that the terrorist who was a high school girl their age and murdered 2 and wounded 28 –is their role model.”

Not only that, but the PA names its schools after well known terrorists, who are also lauded as heroes in the school books.

DALAL AL-MUGHRABI, a Fatah militant who in 1978 took part in an attack on an Israeli bus in which 37 Israelis were killed – including 13 children – enjoys a particularly esteemed place in Palestinian hate education.

For example, a Grade 5 textbook devoting a History Studies lesson to al-Mughrabi describes her as a “female martyr” who “painted with her struggle a picture of challenging and heroism which have made her memory eternal in our hearts and minds.” Through her terrorist actions, al-Mughrabi had elevated herself to the status of “super-heroine, equal to Yasser Arafat and higher in status than Izz al-Din al-Qassam, the historic inspirational figure of the Hamas terrorist organization,” the report noted.

Pointing to a report by Palestinian Media Watch on the names of Palestinian schools, Marcus told the Post: “The PA Ministry of Education has named 31 schools after terrorists including five schools after Dalal al-Mughrabi.”

Another five schools are named for the planner of the Munich Olympics massacre of Israeli athletes, one for the founder of Hamas, and three for Nazi collaborators.

“In addition there are 41 schools that glorify Martyrs and Martyrdom,” Marcus added, concluding: “A Palestinian child cannot go through the PA school system without concluding that murder of Israelis is heroic.”