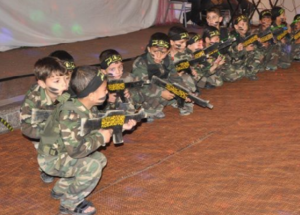 EXECUTIVE SUMMARY: In civilized societies action should be taken against anyone who expresses the desire to commit murder. The Iranian government, Hamas, Hezbollah, various clerics, and other influential figures within the Muslim world, as well as neo-Nazis and other extreme rightists, openly proclaim their desire to commit murder or even genocide against Jews and Israel. Many in the Western world either refuse to heed these statements or actively support them. Many others relentlessly criticize Israel and remain completely silent about Palestinian promotion of the killing of Jews.

Civilized societies should not be silent when people state their intention to murder even a single person, let alone commit genocide. Many Western politicians and other prominent members of society do not seem to agree with this fundamental truth.

In the non-Western world, many people have no inhibitions about saying, directly or indirectly, that they approve of murder in some cases and would personally commit it if the occasion arose. This is most easily seen when the potential victims are Jews. The leaders of Iran, for example, have spent four decades frequently and explicitly expressing their zeal to commit mass murder via the total destruction of the State of Israel.

Supreme Leader Ayatollah Ali Khamenei has used familiar language to state this desire. Earlier this year he employed the phrase “final solution” on his website in yet another call for Israel’s destruction. Perhaps reminded of the phrase’s genocidal origin as the Nazi euphemism for the extermination of European Jewry, Khamenei later invoked a classic antisemitic trope by claiming that the extermination of the predominantly Jewish population of Israel would have nothing to do with Jews. “Eliminating the Zionist regime doesn’t mean eliminating Jews,” he said. “We aren’t against Jews. It means abolishing the imposed regime…Muslim, Christian, and Jewish Palestinians [would] choose their own government and expel thugs like [PM Benjamin] Netanyahu.”

This Western-friendly waffling notwithstanding, Khamenei has made no attempt to conceal his true feelings. He has spoken of Israel as a cancer that must be forcibly cut out. In 2018 he tweeted: “Israel is a malignant cancerous tumor in the West Asian region that has to be removed and eradicated: it is possible and it will happen.” Other leading Iranian figures have spoken out in favor of the destruction of Israel, some explicitly mentioning the leveling of Israeli cities.

Yet Iran is allowed to remain an unhindered member of the United Nations.

The Palestinian terrorist organization Hamas—elected as the majority party by the Palestinians in 2006—also openly and frequently discusses its desire to commit genocide against the Jews. This aspiration is clearly stated in its charter, which states: “Hamas looks forward to implementing Allah’s promise however long it might take. The prophet, prayer and peace be upon him, said: ‘The [Day of Judgment] will not come until Muslims will fight the Jews (and kill them); until the Jews hide behind rocks and trees, which will cry: O Muslim! There is a Jew hiding behind me, come and kill him!’”

Senior Hamas officials occasionally call publicly for the murder of Jews. In 2019, Fathi Hammad, a member of the Hamas Politburo, urged members of the Palestinian diaspora to kill Jews around the world. Hammad said: “You have Jews everywhere and we must attack every Jew on the globe by way of slaughter and killing if God permits.”

The Palestinian Authority (PA) provides generous financial payments to terrorists and their families. It thus creates a huge incentive for Palestinians to murder Jews in Israel. Nor are these pensions limited to the murderers. If Palestinians are killed in an attempt to murder Jews, the financial benefits they would have received accrue to their families. This amounts to a “pay for slay” policy—in other words, the PA actively promotes and encourages the murder of Jews.

In 2019, the PA spent 570 million shekels (about $160 million) on rewards to terrorist prisoners. By August 2019, the Palestinian terrorists who in 2001 killed 15 Israeli civilians—about half of them children—and wounded many more in the Jerusalem Sbarro restaurant bombing had received more than $900,000 from the PA.

In May 2020, the leader of the Lebanese Hezbollah terror organization, Hassan Nasrallah, referred to the creation of Israel as “the establishment of this virus of an entity, this cancerous tumor amidst our umma.” He added, “Israel has no legitimacy to exist at all and must be destroyed.”

Clerics and other influential figures within the Muslim world also call for the extermination of Israel and Jews. Some of these figures have a very broad and influential platform. In 2012, the cleric Futuh Abdel Nabi Mansur officiated at a nationally televised service at the Cairo Tenaim Mosque. The service was attended by then Egyptian president Muhammad Morsi. The cleric said, “O Allah, destroy the Jews and their supporters; O Allah, disperse them and rend them asunder; O Allah, demonstrate your might and greatness upon them.” Morsi could be seen saying “Amen.”

There is also prominent support for murderers elsewhere in the Muslim world. On November 18, 2014, two Muslim terrorists from East Jerusalem murdered six people at a Jerusalem synagogue, including a heroic Israeli Druze policeman. The terrorists were killed. The next day, Jordanian parliamentarians held a moment of silence for the murderers. They read aloud verses of the Quran “to glorify [the terrorists’] pure souls and the souls of all the martyrs in the Arab and Muslim nations.” The Jordanian PM, Abdullah Ensour, sent a condolence letter to the families of the terrorists in which he ”[asked] God to envelop [the terrorists] with mercy.”

Neo-Nazis and other extreme rightists also call publicly for “death to the Jews.” Some have carried this out, as was seen in massacres at two US synagogues. In a similar case in Germany in October 2019, only a strong door stood between Jews praying inside the Halle synagogue on Yom Kippur and a man who had come to slaughter them.

These murderous individuals, while very dangerous, have only local capabilities as yet and are thus not in the same criminal league as Muslim countries and major terrorist organizations that promote murder and genocide.

Beyond the would-be mass murderers themselves are those who finance and promote them. Iran and Qatar make money available to Hamas that enables the group to finance its anti-Israel operations—money that it withholds from its own population to further its own ends.

Several Western and other countries give money to the PA, a body that openly promotes murder. They claim their money is not being used to pay pensions to terrorists and their families, but they have no way of ascertaining this. The PA can use whatever funds it has available, including donor funds, to pay Palestinians to kill Jews.

In the Western world, a variety of senior figures and bodies exhibit the opinion that when Jews are the target, the promotion of murder or genocide ceases to be objectionable. Some of them go so far as to directly promote the interests of the murderers. A striking example is former UK Labour Party leader Jeremy Corbyn, who welcomed representatives of Hamas and Hezbollah to the House of Commons and called them his “friends” and “brothers.”

Others include former US President Jimmy Carter and Mary Robinson, former President of Ireland and UN High Commissioner for Human Rights. In 2014, they co-signed an op-ed in The Guardian suggesting that Europe and the US should recognize Hamas as a political movement. They failed to mention that Hamas is an organization with genocidal aspirations. This was a showcase of senior human rights advocates promoting the interests of would-be mass murderers.

The Dutch government advisory body Adviesraad Internationale Vraagstukken (AIV, or Advisory Council of Foreign Affairs) is in the same category. It issued a report in 2013 recommending contacts between the EU, the Netherlands, and Hamas. The Simon Wiesenthal Center (SWC) wrote to Dutch PM Mark Rutte to disband the AIV for this recommendation, which would obviously come at Israel’s expense. The AIV’s recommendations were not accepted, but the organization was not disbanded.

Josep Borrell, the High Representative of the EU for Foreign Affairs and Security Policy, does not bother to conceal his comfort with the extermination of the State of Israel. He said in an interview: “Iran wants to wipe out Israel. Nothing new about that; you have to live with it.”

Another category—a major one—is those who freely criticize Israel but never mention the criminality of the major Palestinian bodies. They certainly never acknowledge those bodies’ open promotion of murder and genocide. If they criticize the Palestinians at all, they do so superficially and focus on other issues.

One influential person who does this is US Senator Bernie Sanders, a Jewish politician who was a leading contender for the US Democratic presidential nomination. When he addressed the Israeli-Palestinian problem during his campaign, he spoke of the Palestinians’ dignity and called the Israeli government “racist.”

European parliamentarians regularly criticize Israel while averting their eyes from Palestinian invocations of genocide and murder. In the Netherlands, at least one-third of the 150 parliamentarians have done this. In the Swedish and Norwegian governments the percentage is probably higher.

Then there are those who unintentionally help would-be genocidal murderers. In 2015, then US President Barack Obama initiated the extremely flawed Joint Comprehensive Plan of Action (JCPOA) agreement with Iran, which enabled the Iranians to sustain their quest for nuclear weapons with impunity and intensify their subversive and terrorist activities in the Middle East.

In the context of this analysis one should also look at what is often called “Holocaust inversion.” This is exhibited by people who claim Israel intends to exterminate the Palestinians and/or that Israel is like the Nazis. In 2020, the Hungarian Action and Protection League commissioned a report by Hungary’s Inspira Ltd in which interviews were held with members of the adult population between the ages of 18-75 in 16 European countries. Twenty-four percent said they believe Israelis behave like Nazis toward the Palestinians.

The main representative study before Inspira was published in 2011 by the University of Bielefeld on behalf of the German Social Democratic Friedrich Ebert Foundation. Their research was undertaken in seven European countries. The interviewers polled 1,000 people per country over the age of 16 in the fall of 2008. One question was whether they agreed with the assertion that Israel is carrying out a war of extermination against the Palestinians. The lowest percentages of those who agreed were in Italy and the Netherlands, with 38% and 39% respectively. Other figures were Hungary 41%, the UK 42%, Germany 48%, and Portugal 49%. In Poland, the figure was an astonishing 63%.

It is not only Europe’s leaders who have lost their moral grounding. These results reflect the profound moral decay of major segments of the population of the European continent.

Dr. Manfred Gerstenfeld­­­­­­­­­­­­­­­­­­­­ is a Senior Research Associate at the BESA Center, a former chairman of the Steering Committee of the Jerusalem Center for Public Affairs, and author of The War of a Million Cuts. Among the honors he has received was the 2019 International Lion of Judah Award of the Canadian Institute for Jewish Research paying tribute to him as the leading international authority on contemporary antisemitism.