This week, AMCHA Initiative released its annual report, Understanding Campus Antisemitism in 2019 And Its Lessons for Pandemic and Post-Pandemic U.S. Campuses, which documented a more than 300% increase in campus activity intended to undermine and discredit the International Holocaust Remembrance Alliance (IHRA) definition’s identification of anti-Zionism as a form of antisemitism. The report also found that this surge was accompanied by an increase in antisemitic incidents targeting Jewish students for harm.

Specifically, AMCHA found that expression challenging the IHRA definition increased 3.7 times from 34 incidents in 2018 to 126 incidents in 2019. Schools where these challenges occurred were more than twice as likely to host antisemitic incidents targeting Jewish students for harm, and the more challenges the higher the number of incidents. 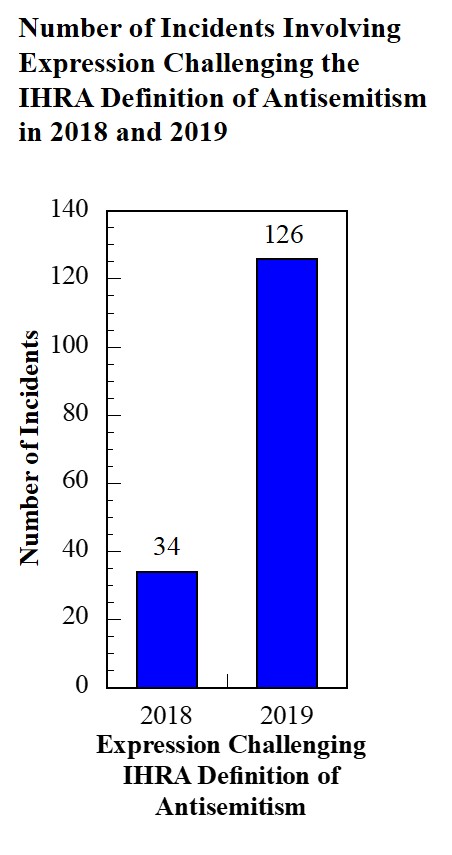 A large majority of these challenges came from anti-Zionist student groups, chief among them Students for Justice in Palestine (SJP) and the anti-Zionist Jewish Voice for Peace (JVP), with JVP’s campus activity increasing 45% in 2019, and much of their activity involving challenges to the definition of antisemitism.

The dramatic uptick in challenges to the definition of antisemitism is likely a response to recent federal, state and student efforts, as well as the Trump Administration’s recent executive order, to get government agencies and universities to use the IHRA definition to ensure that Jewish students are adequately protected from anti-Semitic harassment under anti-discrimination laws, such as Title VI of the 1964 Civil Rights Act, and university harassment policies based on them. Although Jewish students have been considered a protected minority under Title VI for several years, their complaints of Israel-related harassment have regularly been dismissed by the Department of Education and ignored by university administrators. It was therefore hoped that use of the IHRA definition would allow government officials and university administrators to recognize and adequately address Israel-related harassment as anti-Semitism.

However, given the extent of the pushback to the IHRA definition documented in the report and its linkage to acts of anti-Zionist motivated harassment, it remains unclear how effective efforts to address Israel-related antisemitism using the IHRA definition and civil rights law will ultimately be.

AMCHA’s report offers an alternative approach to protecting Jewish students that does not depend on how one defines antisemitism or understands Jewish identity. It is based on the view that Jewish students are best protected when all students are equally protected from behavior that violates their right to self-expression or impedes their ability to full participation in campus life. Instead of seeking protection for individual Jewish students as members of a federally-protected identity group, the approach seeks protection for Jewish students as individuals, with the same rights as all other individuals, to be free from behaviors that seek to suppress or deny their basic liberties, including the freedom to express their opinions, beliefs and group identity.

Additional findings from the report include:

Read and share the full report, including the recommendations outlining our new approach: https://amchainitiative.org/wp-content/uploads/2020/07/Antisemitism-Report-2019.pdf