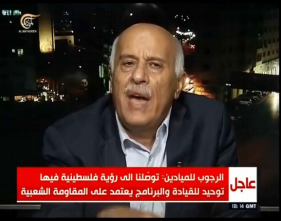 Senior Fatah figures have recently often represented the “popular resistance” [i.e., popular terrorism] as an important response to an Israeli annexation of territories. Senior Fatah figure Jibril Rajoub was interviewed by the Hezbollah-affiliated Lebanese al-Mayadeen TV channel. According to Rajoub the “popular resistance” is carried out peacefully (a baseless allegation) and has gained international legitimacy. However, in principle does not reject the alternative of “armed resistance” (i.e., institutionalized military terrorism). Relating to the issue in careful terms, he said that in the event of an annexation, [Fatah] would meet to decide the option of “armed resistance” (for the main points of the interview see Appendix A). In addition, Fatah spokesman Usama al-Qawasmeh said that currently Fatah was in constant contact with Hamas to advance a plan of escalation of the “popular resistance,” as had been carried out in the first intifada.