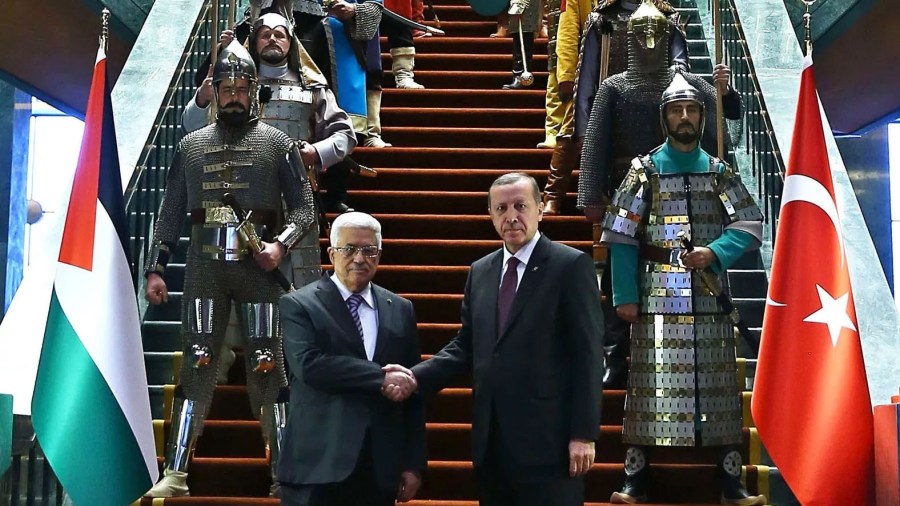 In recent months, Turkey has increased its efforts to enhance its position as a regional power following in the path of the Ottoman Empire, adopting daring measures that border on megalomania at home, in the region, and internationally. These steps reflect President Recep Tayyip Erdoğan’s worldview that sees himself – all at the same time – as the sultan of a resurgent empire, the leader of a modern and powerful Turkish nation, and an Islamic leader according to the “correct” theological interpretation, which he sees as that of the Muslim Brotherhood. He views himself as the pillar of the Brotherhood in the region.

This weltanschauung places Erdoğan as the leader of the return to the Ottoman Empire’s glory days and protector of Muslims against the plots of local and regional enemies (such as the Turkish dissident leader Fethullah Gülen, pragmatic Muslims led by the United Arab Emirates, Egypt, Saudi Arabia), and foreign foes (Greece, Israel, Europe, and the United States).

A video with distinct nationalistic themes was recently broadcast by the Turkish Ministry of Information.2 The film is entitled, “The Red Apple [kizil elma],” which is a Turkish cultural concept describing Turkey’s ambition to achieve superpower status or some far-reaching goal no matter the sacrifice. Turkish policies reflect the official interpretation of the “Red Apple” and its implementation on a broad range of fronts.

Playing to Turkish and Islamic audiences, Erdoğan’s crowning moment in the video was the transformation of the historic Hagia Sophia church (built in 537 CE in Constantinople/Istanbul) from a museum to a mosque on July 10, 2020, and his arrival for Friday prayers there on July 24. It was a show of power domestically and to the Christian world. The move was also to serve as a boost for Turkish patriotism and Islamic adherence.

Beyond the context of Turkey’s religious battles in Istanbul, the Turkish video also displays a troubling appetite for Jerusalem and Saudi Arabia’s holy sites in Mecca and Medina. The first screenshot below shows the holy Kaaba in Mecca; the second shows the green dome over Muhammed’s grave in Medina, and the last shot of the video shows the Temple Mount with al-Aqsa Mosque on it. Indeed, Erdoğan ended a speech on July 10, 2020, saying that the “revival of the Hagia Sophia as a mosque is ushering the news for the liberation of al-Aqsa mosque in Jerusalem.”3

The following are some of the bold steps Turkey has recently taken:

The American peace plan and the peace agreement between Israel and the United Arab Emirates, which both weaken the Palestinians’ bargaining ability, drew rage in Ankara. Turkey leveled fierce criticism even though it maintains diplomatic relations and a very extensive financial relationship with Israel, all the while trying to present itself as the Palestinians’ greatest supporter.

Turkish policies are under criticism for creating instability, for their pretentiousness and presumptuousness that do not always match Turkey’s real power or its few accomplishments, which actually show the limits of Erdoğan’s power. But one should not underestimate President Erdoğan’s ability to utilize Turkey’s strategic assets to advance his challenging strategy. Erdoğan recognizes these assets at his disposal:

Despite these strategic advantages, the data and statistics of the global and regional arena do not indicate Turkish achievements; rather, they reflect Ankara’s limited and accurate weight:

So what is Turkey’s next step? The “Red Apple” video exposes the depth and roots of Erdoğan’s aspirations for hegemony in the region. As any regional bully, Erdogan will not hesitate to expand his control and influence vis-à-vis those who are willing to bow down to him or those who, out of their weakness and ideological affinity to the Muslim Brotherhood, are ready to ask for his support in promoting their interests and are ready to pay by allowing Erdogan to gain a foothold and economic benefits.

On the other hand, when Erdoğan is met with determination and willingness to set clear boundaries, he will try to avoid confrontation because, deep in his heart, he is aware of the limitations of his power. Thus, the policy that the EU will adopt towards Turkey at the expected meeting of the EU heads of states on September 23, 2020, will determine to a large extent how Turkey will act in regard to Greece in the conflict over oil exploration rights. The same is true for the other friction areas in which Turkey is involved.

Israel is perceived by Erdoğan as a powerful rival that threatens Turkish and Islamic interests and promotes an ideology opposite to that of Turkey. This can be seen, among other things, through Israel joining the pragmatic Sunni camp in the region, led by the Emirates, Turkey’s sworn rival that does not hesitate to confront Turkey in every arena, including Libya, the eastern Mediterranean, Qatar, the Palestinian camp, and Saudi Arabia – the ultimate destination of Turkish hegemonic aspirations. That can also be seen in the video, which presents images of the Kaaba in Mecca, Mohammed’s grave in Medina, and the al-Aqsa Mosque in Jerusalem.

The Turkish provocation against Israel is unrestrained and is reflected in the Turkish opposition to Israel’s normalization of ties with the Arab world, its attempts to thwart the plan to lay a gas pipeline from Israel to Europe, and, of course, in its championing the Palestinians’ cause including that of the radical and murderous Hamas.

At the same time, Erdoğan recognizes Israel’s military and political power (especially its relations with the United States, Europe, and Russia) and realizes that without relations with Israel, its ability to intervene in the Palestinian system would diminish. Turkey also recognizes the importance of diplomatic and economic ties with Israel. That is why Erdoğan avoided irreversible moves that would damage his country’s diplomatic relations.

To prevent Erdoğan from provocations against Israel, it must be made clear to him the limits to the actions that Israel is willing to tolerate. Legitimate criticism and political disagreements are certainly within the allowable limit, while harming Israel’s vital interests and aiding terrorist organizations may lead to a determined Israeli response.