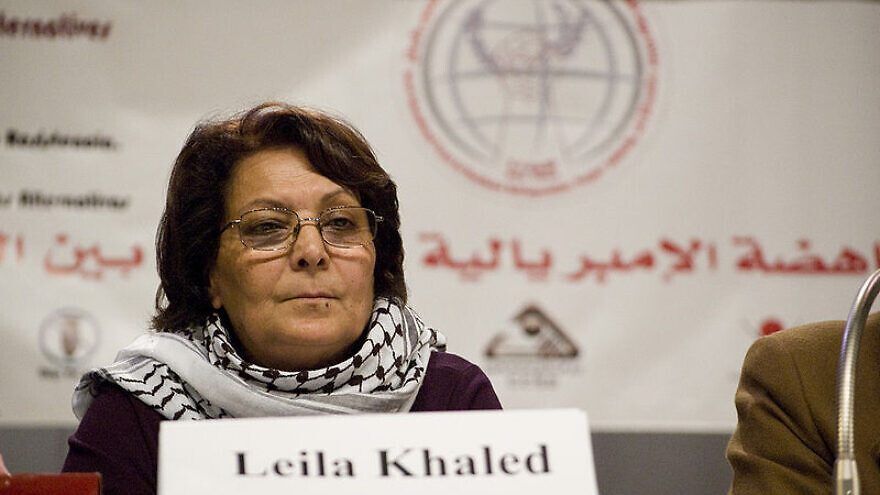 The following AMCHA-coordinated letter from 86 organizations was sent this morning to San Francisco State University President Lynn Mahoney regarding the upcoming departmentally-sponsored “open classroom” webinar featuring convicted PFLP terrorist Leila Khaled, that’s being organized by openly anti-Zionist professor Rabab Abdulhadi. The event has sparked much outrage in the Jewish community, and many individuals and organizations have already written to SFSU President Mahoney with concerns about the antisemitic nature of the event, particularly its glorification of terrorism. The letter below takes a a somewhat different approach and focuses specifically on the question of whether politicization of the SFSU classroom for the purposes of promoting anti-Zionist propaganda and activism — something Prof. Abdulhadi has been doing, relentlessly, for years —  is protected by academic freedom, as President Mahoney has claimed in emails she’s sent to those who have written to her about this event, as well as in a public statement she recently released.

Best wishes for a happy, healthy and sweet new year!

We are 86 organizations, many representing university faculty and other academic stakeholders throughout the state and across the country. We are writing to ask you to clarify your interpretation of academic freedom with respect to an upcoming “open classroom” event hosted by SFSU College of Ethnic Studies’ Arab and Muslim Ethnicities and Diasporas (AMED) program and the Women’s Studies Department [1]. The event features Leila Khaled, a convicted terrorist who has engaged in violent acts against Israeli and Jewish civilians. In an email you sent to numerous individuals who had written to express their deep concern about the likely antisemitic content of this event and its harmful impact on Jewish students, you responded that “San Francisco State University supports academic freedom,” and stated:

“An invitation to a public figure to speak to a class should not be construed as an endorsement of point of view…An important outcome of the college experience is to learn to think critically and come to independent, personal conclusions about events of local and global importance.” [2]

We recognize that it is not always easy to know whether a faculty member intends to educate or politically indoctrinate students. However, sometimes it is crystal clear, as in the case of AMED director Professor Rabab Abdulhadi, who organized this event and specifically invited Leila Khaled, a leader of a US State Department-designated terrorist organization [3], who continues to make public statements in support of armed violence against Israel [4]. It should also be pointed out that, like Khaled, the four other invited event participants have a history of engaging in politically-motived violence and/or been associated with organizations that engage in armed violence, and they have each publicly expressed anti-Zionist sentiments including support for the anti-Israel Boycott, Divest, Sanctions (BDS) movement.

Prof. Abdulhadi, a founder of the US Campaign for the Academic and Cultural Boycott of Israel and a leader in the BDS movement, has not only been extraordinarily open about her personal anti-Zionist views in her classroom and other professional spaces – for instance, she proudly exclaimed at an AMED-co-hosted event earlier this year [5], “I am anti-Zionist, I have no problem [saying it], I am a proud advocate!” — she has also been forthright in expressing her belief that she is fully entitled to promote anti-Zionism and encourage anti-Zionist activism in her classroom, at AMED-sponsored events and on AMED’s social media platform. Indeed, Prof. Abdulhadi has argued that such advocacy and activism are “part of my job duties…reasons why SFSU hired me in the first place.” And to that end, Prof. Abdulhadi has relentlessly used her professional position and the name and resources of the university in order to purvey virulently anti-Zionist propaganda that vilifies Israel and defames Israel’s supporters on and off campus; to call for the destruction of Israel and condone terrorism to achieve that end; and to actively encourage students to engage in BDS efforts and other anti-Zionist activism. For example:

We fully acknowledge that faculty members like Prof. Abdulhadi have every right, as private citizens, to express anti-Zionist views and engage in anti-Zionist activism. However, we believe Abdulhadi’s continuous and intentional use of her SFSU position and the name and resources of the University to indoctrinate students with her own personal animus towards the Jewish state and its supporters and to promote anti-Israel activism, does not constitute a legitimate use of academic freedom, but an abuse of it. In addition, we believe Prof. Abdulhadi’s blatant politicization of her classroom, conference hall and other professional spaces violates state laws prohibiting the misuse of SFSU’s name and resources for personal or political purposes, including for the promotion of a boycott (e.g. CA Government Code §8314 [12] and CA Education Code §89005.5 [13]); deprives her students of access to vital information about complex topics of global importance, as well as their fundamental right to be educated and not indoctrinated; foments a divisive and toxic atmosphere, both inside and outside the classroom, that incites hatred and harm towards Jewish and pro-Israel students; and seriously erodes the public trust in your university to uphold its academic mission and ensure the safety and well-being of all of its students.

In light of the above considerations, we ask whether you still believe the upcoming event is a legitimate expression of academic freedom, and if not, what you intend to do about it.

Thank you for your leadership in these challenging times,