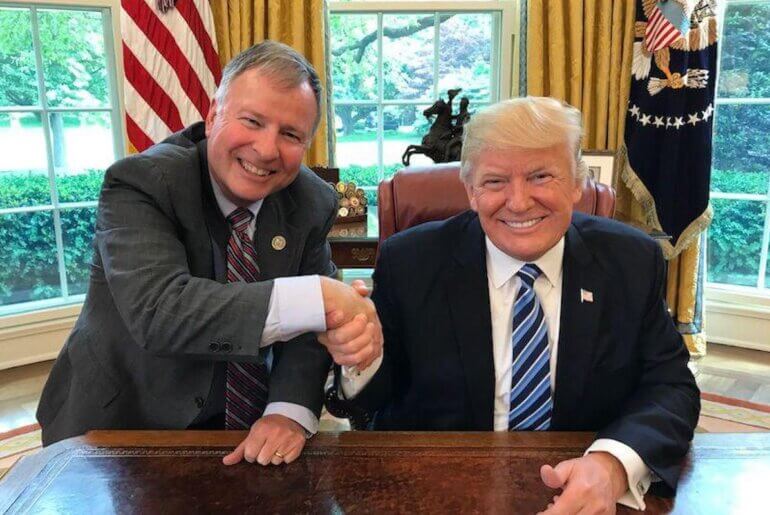 In one final push before Donald Trump leaves office, some Republican Members of Congress are attempting to push the Trump administration to declassify a State Department report that distinguishes between Palestinian refugees born in Palestine before Israel’s establishment in 1948 and their descendants.

On December 11, Rep. Doug Lamborn (R-CO) and 21 of his fellow Republican colleagues in the House sent President Donald Trump a letter urging him to declassify the report mandated by Congress in 2012 as a way to “address the so-called ‘Palestinian refugee’ population.”

The scare quotes and use of the deprecatory term “so-called” are an indication that this letter is not just an attempt by Congress to assert its powers to get the Executive Branch to provide it with information.

Instead, it is part of a concerted effort to prompt the Trump administration to prejudge in Israel’s favor yet another permanent status issue ostensibly intended for resolution in Israeli-Palestinian negotiations.

The political nature of the demand is spelled out clearly by these Members of Congress.

“The issue of the so-called Palestinian ‘right of return’ of 5.3 million refugees to Israel as part of any ‘peace deal’ is an unrealistic demand, and we do not believe it accurately reflects the number of actual Palestinian refugees…it is time to end the fiction of the ‘right of return’ and bring the conflict one step closer [to] conclusion,” they argued.

Trump’s declaration of Jerusalem as Israel’s capital upended 70 years of bipartisan policy of refusing to acknowledge any party’s claims to sovereignty over the city. Secretary of State Mike Pompeo’s proclamation that Israeli settlements in the West Bank are not illegal superseded a Carter administration legal memo affirming that Israeli colonization of Palestinian land is contrary to international law. And the Trump administration’s “deal of the century” settled borders in Israel’s favor by giving it a green light to illegally annex as much as 30 percent of the West Bank outside the framework of negotiations.

To understand the salience of this report and its findings, it is necessary to digress historically to the Obama era. In 2012, the former anti-Palestinian Senator Mark Kirk (R-IL) introduced an amendment to an appropriations bill mandating an Executive Branch report distinguishing between Palestinian refugees “personally displaced” in 1948 and those who were not. It also required the State Department to distinguish between Palestinian refugees living in the West Bank and Gaza Strip and those living outside historic Palestine.

The intended impact of the amendment on US policy was obvious: to count as Palestinian refugees only direct survivors of the Nakba residing outside of Palestine.

To its credit, the Obama administration pushed back against this amendment. “The status of Palestinian refugees is one of the most sensitive final status issues confronting Israel and the Palestinians; it strikes a deep, emotional chord among Palestinians,” the State Department wrote.

“United States policy has been consistent for decades, in both Republican and Democratic administrations–final status issues can and must only be resolved between Israelis and Palestinians in direct negotiations. The Department of State cannot support legislation which would force the United States to make a public judgment on the number and status of Palestinian refugees.”

The resulting compromise placed the reporting directive in the accompanying Senate report on the bill instead of in the text of the legislation itself, arguably lessening its constitutional gravitas. The compromise also stripped out the directive to distinguish between refugees inside and outside of Palestine.

The Obama administration dragged its feet on reporting this information to Congress, but eventually relented in 2015. However, it classified the report, “despite no apparent national security threat or known historical precedent for classifying such a report,” according to the 22 Republicans who signed the recent letter to Trump.

Classifying the report prevented its wide dissemination. However, sources who have seen the report indicate that the State Department counted approximately 20,000 Palestinian refugees who fit the criteria of the congressional reporting requirement, a far cry from the 5.7 million Palestinian refugees registered with UNRWA today.

Shortly before the Trump administration cut all funding to UNRWA, Lamborn introduced a bill that would have had almost the same effect. His deceptively entitled UNRWA Reform and Refugee Support Act would ensure “that US taxpayer dollars dedicated to refugees should only contribute to UNRWA to the extent that it resettles the original refugees from 1948, not the great-grandchildren who may have not even grown up in the Middle East but comfortably in other nations.”

The Trump administration is facing pressure to do so from those outside Congress as well. As a recent op-ed in the right-wing New York Post by Jonathan Schanzer and Richard Goldberg of the anti-Palestinian Foundation for the Defense of Democracies called the Trump administration’s decision not to release an updated and unclassified version of the report “puzzling”. Schanzer and Goldberg argued that this “policy change would thus upend the mythology of a Palestinian ‘right of return’”.

The Israel Allies Foundation, a lobbying organization promoting Israel’s policies in legislatures across the globe, is also highlighting the effort, along with Americans for a Safe Israel, an organization supporting a one-state, apartheid resolution.

If the Trump administration’s declassifies the report, it will not change the status of Palestinian refugees in international law, just as its positions on Jerusalem, settlements, and annexation do not alter the illegality of Israeli practices in Occupied Palestinian Territory.

Either way, the GOP would achieve another victory in predetermining for the purposes of US policy a permanent status issue in Israel’s favor and further positioning itself as the guarantor of Israel’s interests.