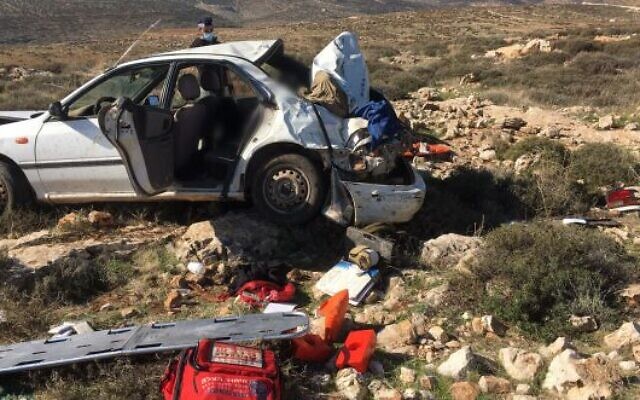 I would like to say to all the policemen who pursued the young men, collided with them, and caused the death of Ahuvia Sandak. You committed the greatest sin of all. I do not know who gave you the criminal order to pursue the young men’s vehicle, to ram it, and to kill a seventeen year old young man. There is no doubt that the one who gave this order should be expelled from police ranks directly to prison.

I find it especially astounding how the police are determined to pursue a Jew who is only “suspected” of throwing stones, while vis-à-vis Arabs who actually throw stones, you take virtually no action, certainly not with that degree of determination. There are dozens of weekly instances of stone throwing by Arabs that are not at all addressed by you and the cases are dismissed on the day of the complaint due to lack of public interest.

I, myself, was involved in an incident where Arabs threw a stone weighing at least ten kilograms at me, it broke the car’s windshield and endangered all those sitting in the car. I was in a convoy of car and they threw stones at all of them. The armed policemen and soldiers who stood there did not fire and did not pursue the throwers of th stones, which, as we know, are capable of killing.

You must repent. The prophet Isaiah says: “And when you spread your hands, I will avert My eyes from you; even when you increase prayer, I do not listen; your hands are full of blood” (Isaiah 1:15). Your hands and the hands of your commanders are full of blood. All your prayers will not be heard before the Creator even on Yom Kippur until you repent. Go to the family, fall on your knees, and ask forgiveness from the bereaved family whose son you killed.

After forgiveness, sit among yourselves and clean house. Expel all those among you who are unsuitable, who confuse you and order you to act contrary to common sense. Take action to expel them from police ranks, whether they are confused commanders like Yair Golan or whether they are attorneys trained by the New Israel Fund.

You may, indeed you must ask those giving orders why there is a double standard in the orders. Why do we overlook the Arab stone throwers and pursue only the Jews? Do not allow them to undermine your common sense.

May it be His will that the Lord return you in perfect repentance.

For those who have not followed the news here is the story:
https://www.timesofisrael.com/suspect-dies-in-police-chase-of-settlers-who-threw-rocks-at-palestinians/