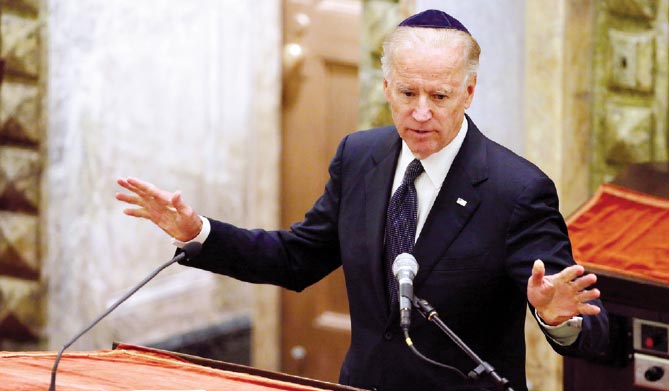 The election of a new president of the US, Joe Biden, occurred with widespread Jewish support in several swing states. The time has come to ask how the new president can express appreciation to his Jewish constituency.

Firstly, Biden can launch his presidency with decisive actions against a threat to lives of all Jews. Jewish supporters of Biden can ask him to do what no other US president has done: to demand the repeal of the statute enacted by the Palestinian Authority in 2015, which created the first legislation in history to foster an unprecedented law that formally honors anyone who murders a Jew, anywhere in the world, with a lifelong gratuity.

That unprecedented PA fee for murdering a Jew is granted to the killer and to the family of the assailant for life. Biden’s Jewish constituency can ask him to condition support for a Palestinian entity on a demand  that the PA nullify legislation that provides automatic fees for anyone  who murders a Jew.

Biden’s Jewish constituency can remind the new president that under  the Middle East Peace Facilitation Act of 1995 (commonly known as  MEPFA), the US Congress provided authorities, requirements, and re strictions to specific standards and expectations when dealing with the PA.

These constraints – enacted during the administration of a Democratic  president, Bill Clinton – determined that the new president and the new  Congress must continuously certify that the PLO and its administrative  arm, the PA, abide by commitments made in good faith to implement  Declaration of Principles of the Oslo Peace process and specifically “the  PLO commitments relevant to Presidential certifications have included  commitments to renounce and condemn terrorism, to submit to the Palestinian National Council for former approval the necessary changes to  those articles of the Palestinian Covenant which call for Israel’s destruc tion, and to prevent acts of terrorism and hostilities against Israel.”

Jewish peace supporters of the new president can hold him to the re quirements of the MEPFA legislation – to meet with the appropriate US  Congressional committees that are supposed to oversee the denunciation  of terrorism and commitment to peace by the PA, which assert that “the  President also has the obligation to continuously monitor and ensure that  the PA has complied with all of its commitments, as expressly stated in  SEC 604 (b)(4). In addition, the president is required to recertify these  findings to Congress every six months.”

That recertification process includes, among other requirements, “halt ing all anti-American and anti-Israel incitement in Palestinian Author ity-controlled electronic and print media and in schools, mosques, and  other institutions it controls, and replacing educational materials, includ ing textbooks, with materials that promote peace, tolerance and coexis tence with Israel.”

That very American law mandates Biden to determine whether or not  the PA is affiliated or in works with Hamas or any other foreign terrorist organization. If the president suspects such things, he shall “urge mem bers of the international community to avoid contact with and refrain  from supporting the terrorist organization Hamas until it agrees to rec ognize Israel, renounce violence, disarm, and accept prior agreements.” Pursuant to the limitation on assistance to the West Bank and Gaza, US  law mandates that foreign assistance funds from the US for the benefit of  the PA can only be provided if the new secretary of state certifies to the  appropriate committees in Congress that the PA, PLO, or their affiliates  have taken certain actions in the pursuit of peace. This certification is  required every 180 days.

Meanwhile, Biden’s Jewish enthusiasts, who deeply care about the  future of the Palestinian Arab entity, can ask the new Biden administra tion to pursue a new policy toward UNRWA, which does not allow yet  another US administration to witness five million descendants of Arab  refugees of the 1948 war confined to the indignity of refugee camps for  perpetuity, under the false hope of the right of return to villages that ex isted 73 years ago.

The peace camp that supported the Biden candidacy can push the new  administration to ask UNRWA to adopt the principles of the Office of  the United Nations High Commissioner for Refugees – which apply to  all other refugees around the world – and order UNRWA to permanently  resettle Arab refugees from the 1948 war.

In short, there is much the Biden administration can do if it wants to  establish a Middle East legacy that will last a lifetime.

Now is the time for a new president to launch a courageous initiative  to eliminate a root cause of Middle East violence, and remove the label  “refugee” from millions of Palestinian Arabs who have been marked  with that status since 1949. ■