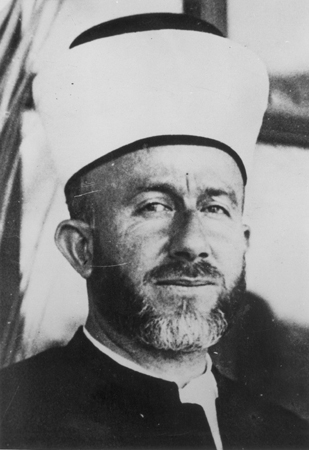 The Mufti of Jerusalem, Haj al-Amin al-Husseini, will never be accused of loving Jews. In fact, 70 years ago today, the Mufti, who was Yasser Arafat’s uncle, met with Adolph Hitler in Berlinto discuss the ‘final solution’ to the ‘Jewish problem.’

In 1937, the Mufti testified before the Peel Commission, which was looking into the causes of unrest between Jews and Arabs in what was then known as ‘Palestine.’ The Mufti made a stunning admission: Most of the land that belonged to the Jews, which we are constantly accused of ‘stealing,’ had actually been purchased by the Jews from the Arabs. And the Arabs were what we lawyers call willing sellers.

The Peel Commission report had some very salutary things to say about the Zionists and their impact on the land and on Arab society and economy. One of the most important for debunking Arab anti-Israel accusations is:

“The Arab population shows a remarkable increase since 1920, and it has had some share in the increased prosperity of Palestine. Many Arab landowners have benefited from the sale of land and the profitable investment of the purchase money. The fellaheen (Arab peasants) are better off on the whole than they were in 1920. This Arab progress has been partly due to the import of Jewish capital into Palestine and other factors associated with the growth of the (Jewish) National Home. In particular, the Arabs have benefited from social services which could not have been provided on the existing scale without the revenue obtained from the Jews…Much of the land (being farmed by the Jews) now carrying orange groves was sand dunes or swamp and uncultivated when it was purchased…There was at the time of the earlier sales little evidence that the owners possessed either the resources or training needed to develop the land.” The land shortage decried by the Arabs “…was due less to the amount of land acquired by Jews than to the increase in the Arab population.” (Chapter V in the report).

El-Husseini’s interview on January 12, 1937 was preserved in the Commission’s notes and referenced, although not published, in the full report. It has been summarized by a number of scholars, including Kenneth Stein, The Land Question in Palestine 1917-1939 (Univ. of North Carolina Press, 2009) and Howard M. Sachar, A History of Israel from the Rise of Zionism to our Time (Alfred A. Knopf, 1976); and a detailed analysis with quotations from the interview can be found in Aaron Kleiman’s The Palestine Royal Commission, 1937 (Garland Publications, 1987, pp. 298ff.).

The selections from the interview presented below can be found on line here and here. Sir Laurie Hammond, a member of the Peel Commission, interviewed the Mufti about his insistence to the Commission that Zionists were stealing Arab land and driving peasants into homelessness. He spoke through an interpreter.

SIR L. HAMMOND: Would you give me the figures again for the land. I want to know how much land was held by the Jews before the Occupation.

MUFTI: At the time of the Occupation the Jews held about 100,000 dunams.

MUFTI: At the date of the British Occupation.

SIR L. HAMMOND: And now they hold how much?

MUFTI: It may be that the difference was due to the fact that many lands were bought by contract which were not registered.

MUFTI: Sarsuk. An Arab of Beyrouth.

SIR L. HAMMOND: His Eminence gave us a picture of the Arabs being evicted from their land and villages being wiped out. What I want to know is, did the Government of Palestine, the Administration, acquire the land and then hand it over to the Jews?

MUFTI: In most cases the lands were acquired.

SIR L. HAMMOND: I mean forcibly acquired-compulsory acquisition as land would be acquired for public purposes? < MUFTI: No, it wasn’t.

SIR L. HAMMOND: But these lands amounting to some 700,000 dunams were actually sold?

MUFTI: Yes, they were sold, but the country was placed in such conditions as would facilitate such purchases.

SIR I HAMMOND: I don’t quite understand what you mean by that. They were sold. Who sold them?

MUFTI: In most cases they were Arabs.

SIR L. HAMMOND: Was any compulsion put on them to sell? If so, by whom?

MUFTI: As in other countries, there are people who by force of circumstances, economic forces, sell their land.

SIR L. HAMMOND: Is that all he said?

SIR L. HAMMOND: Is His Eminence in a position to give the Commission a list of the people, the Arabs who have sold lands, apart from those absentee landlords?

MUFTI: It is possible for me to supply such a list.

SIR L. HAMMOND: I ask him now this: does he think that as compared with the standard of life under the Turkish rule the position of the fellahin in the villages has improved or deteriorated?

MUFTI: Generally speaking I think their situation has got worse.

MUFTI: Taxation was much heavier then, but now there are additional burdens.

SIR L. HAMMOND: I am asking him if it is now, the present day, as we are sitting together here, is it a fact that the fellahin has a much lighter tax than he had under the Turkish rule? Or is he taxed more heavily?

MUFTI: The present taxation is lighter, but the Arabs nevertheless have now other taxation, for instance, customs.

LORD PEEL: And the condition of the fellahin as regards, for example, education. Are there more schools or fewer schools now?

MUFTI: They may have more schools, comparatively, but at the same time there has been an increase in their numbers.

The Hajj Amin el-Husseini, the intractable opponent of Zionism, a Jew-hater on par with Hitler, admitted under questioning that no Arab land was stolen; no Arabs were wiped out, no villages destroyed. Rather, the Jews bought hundreds of thousands of dunam (about ¼ of an acre) of land from willing sellers, often from absentee Arab landowners. Moreover, thanks in part to the Zionists and the British, the quality of life for Palestine’s Arab peasantry was vastly improved, with less taxation, more schools, and an increase in Arab population.

The next time someone spouts the Arab line about how Zionists came and stole Arab land and drove Arabs out, just quote the Mufti.

Here’s betting that the people who come out to defend the ‘Palestinians’ on this blog will ignore this post. By the way, inFrom Time Immemorial, Joan Peters quotes extensively from the Peel Commission testimony. It’s no small wonder why.