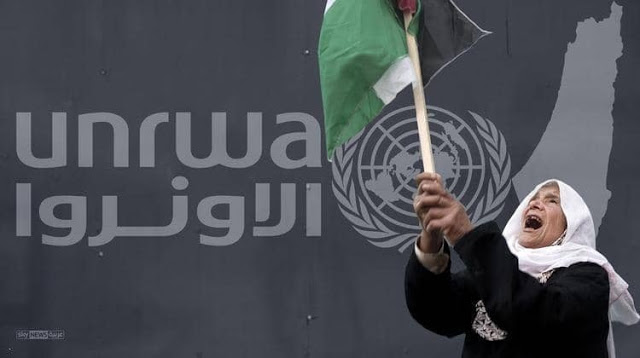 The recently incorporated think tank, the Bedein Center for Near East Policy Research, has covered UNRWA education for the foreign press and the diplomatic corps ever since the Palestinian Authority began to act as the exclusive source for the curriculum in UNRWA schools which operate in Jerusalem, Judea, Samaria and Gaza on August 1, 2000.

The UN does not finance UNRWA education, leaving that to UNRWA donor nations -led by Germany.

The Bedein Center has hired professional staff fluent in Arabic to analyze all 1,000 texts that the PA provided UNRWA since the year 2000. The agency does not limit its purview to the text books which the PA provides at the beginning of each school year. The Bedein Center films UNRWA schools, conducts studies of the terror takeover of UNRWA and studies UNRWA fiscal responsibility.

The most recent encounter occurred on February 9, 2021 where documented evidence of UNRWA indiscretions were once again brought to the attention of highest level of the UN. At the conclusion of that session, the Simon Wiesenthal Center called on the UN Secretary General to condemn UNRWA’s antisemitism in no uncertain terms.

However, the UN Secretary General’s office has responded at each encounter that UNRWA acts on its own, with their source of authority emanating only from the UNRWA donor nations. Additionally, since sources at the office of the UN Secretary General say that UNRWA does not have a way to receive or monitor the PA textbooks, the Bedein Center has launched a site in which all PA texts are posted.

The question remains: Will UNRWA continue to confine millions of descendants of 1948 refugees to the indignity of life in 59 “temporary” refugee facilities for yet another 70 years?

While UNRWA acts under the aegis of the UN General Assembly, which will never allow a change in the UNRWA mandate to keep Arab refugees in refugee perpetuity, nothing prevents UNRWA donor nations from adopting policies that would solve the plight of five million people confined to the indignity of 59 refugee facilities.

The Refugee Working Group (RWG), established by the Madrid Peace Conference in 1991 and chaired by Canada, independent of the UN General Assembly, could and should adopt the UNRWA Reform Initiative (URI), in order to revamp UNRWA immediately:

The demand to overhaul UNRWA depends on feedback to legislative bodies that fund UNRWA, so as to free Arab refugees from the yoke of UNRWA, so that they can get on with their lives. The fight to challenge antisemitic UNRWA policies begins in Ottawa.

After the Bedein Center brought evidence to Ottawa in 2003, 2006 and 2009 and 2012 that UNRWA unions had fallen under the control of Hamas terrorists, Canada became the first nation to cut off the UNRWA general fund. Canadian MP’s across the political spectrum supported punitive policies against UNRWA at the time.

Canada renewed aid to UNRWA in 2015 after false reports reached Ottawa that UNRWA had introduced peace education in all of its facilities. With a dormant RWG, UNRWA policies remain in the hands of Ottawa which is the RWG gavel holder; therefore, Canadian citizens must now take the initiative, and demand that the Federal Government revive the RWG and conduct public forums on UNRWA’s dangerous antisemitism, invite citizens and parliamentarians of other UNRWA funding nations to also contribute and do so expeditiously as every day more children are educated to hate and to aspire to kill Jews!