Since 1993, the U.S. government has provided more than $6.3 billion in bilateral assistance to Palestinians in the West Bank and Gaza. This aid ceased as of Jan. 2019, but the Biden administration has announced its intent to resume funding.

For FYs 2015-19 assistance spending, the U.S. Agency for International Development ensured that the awards it funded directly went to individuals and organizations that were checked for links to terrorism.

However, USAID did not ensure that awards these entities made to others, known as subawards, were compliant with antiterrorism requirements.

If funding resumes, we recommend measures to improve compliance.

The West Bank and Gaza and Surrounding Countries 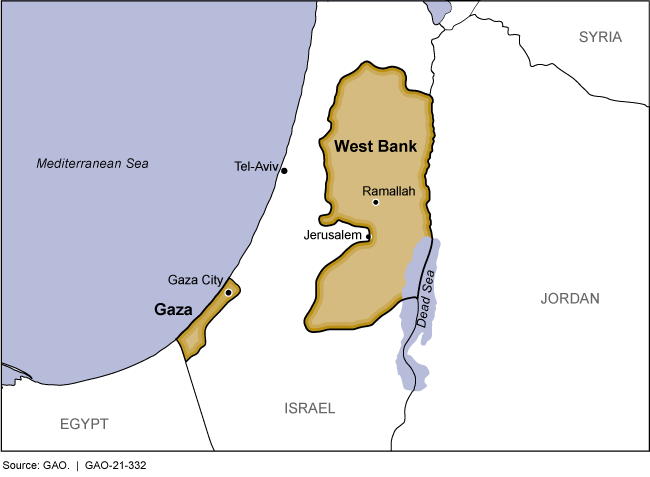 The U.S. government has provided assistance to Palestinians in the West Bank and Gaza to promote Middle East peace since 1993, in part through programs administered by the U.S. Agency for International Development (USAID) and funded by the Economic Support Fund (ESF). This funding ceased as of January 31, 2019. By September 30, 2020, USAID had expended most of the ESF funds that were allocated for the West Bank and Gaza program in fiscal years 2015–2019. Specifically, USAID expended $487.3 million of the $540.4 million in fiscal year 2015 and 2016 ESF assistance for the program. The Trump administration reprogrammed the $230.1 million allocated for fiscal year 2017 to other programs and did not allocate funds for fiscal years 2018 and 2019. In December 2018, the Palestinian Authority stated that it would not accept assistance after January 31, 2019, because of its concerns about the Anti-Terrorism Clarification Act of 2018. The act included provisions that could make recipients of ESF assistance subject to U.S. lawsuits, according to officials from the Department of State (State) and USAID. In January 2021, the Biden administration announced its intent to resume U.S. assistance to programs for the West Bank and Gaza.

USAID took several steps concerning ongoing projects and staffing levels at its West Bank and Gaza mission after assistance for the program ceased as of January 31, 2019. USAID ended 27 ongoing projects. USAID also stopped refilling authorized positions at its West Bank and Gaza mission, notified Congress of a planned reduction in force in May 2019, and placed about 50 staff on temporary assignment to other efforts. According to USAID, after receiving the notification, congressional committees requested that USAID place a hold on the planned reduction in force pending continued deliberations. While USAID has not terminated staff, the mission’s staff decreased 39 percent from December 2017 to September 2020 because of post departures, transfers, and resignations.

USAID’s antiterrorism policy and procedures for the West Bank and Gaza program outline three requirements for ESF recipients: vetting for many non-U.S. recipients of assistance, antiterrorism certifications for recipients of grants or cooperative agreements, and mandatory provisions intended to prevent financial support to terrorism in all prime awards and subawards. GAO found that, for fiscal years 2015–2019, USAID fully complied with all three requirements when awarding prime awards, but did not consistently ensure that subawards were in compliance. In addition, GAO’s analysis of a generalizable sample of subawards and USAID’s compliance reviews showed gaps in compliance for the vetting and mandatory provisions requirements at the subaward level. For example, GAO’s analysis of USAID’s compliance reviews found that 13 of the 86 reports had one or more instances of a prime awardee not incorporating the mandatory provisions, covering 420 subawards. USAID provided pre-award training to prime awardees on antiterrorism requirements for subawards, but did not verify that awardees had procedures to comply with the requirements. Further, USAID’s post-award compliance reviews occurred, at times, after the subawards expired, which was too late to take corrective actions. Should ESF funding resume, verifying that prime awardees have such procedures and conducting post-award compliance reviews in time for corrections would better position USAID to reduce the risk of providing assistance to entities or individuals associated with terrorism.

Why GAO Did This Study

Since 1993, the U.S. government has provided more than $6.3 billion in bilateral assistance to Palestinians in the West Bank and Gaza. According to USAID and State, because of a combination of policy and legal actions, ESF funding ceased as of January 2019. USAID is primarily responsible for administering ESF assistance to the West Bank and Gaza and ensuring compliance with its antiterrorism policies and procedures.

Appropriations acts for fiscal years 2015–2019 include provisions for GAO to review the uses of ESF funds for the West Bank and Gaza program. GAO was also asked to review how ceasing this assistance affected USAID’s staffing resources. This report examines the (1) status of USAID’s ESF assistance to the program for fiscal years 2015–2019, as of September 30, 2020; (2) steps USAID took for ongoing projects and staffing levels when ESF assistance ceased; and (3) extent to which USAID complied with its antiterrorism policies and procedures for fiscal years 2015–2019. GAO reviewed laws and agency policies, procedures, documents, and data, and assessed a generalizable sample of 245 subawards for compliance with USAID’s antiterrorism policies and procedures.

GAO recommends that, should funding resume, USAID (1) verify prime awardees have procedures to ensure compliance with requirements before making subawards and (2) conduct post-award compliance reviews in time to make corrections before the awards end. USAID agreed with the recommendations.