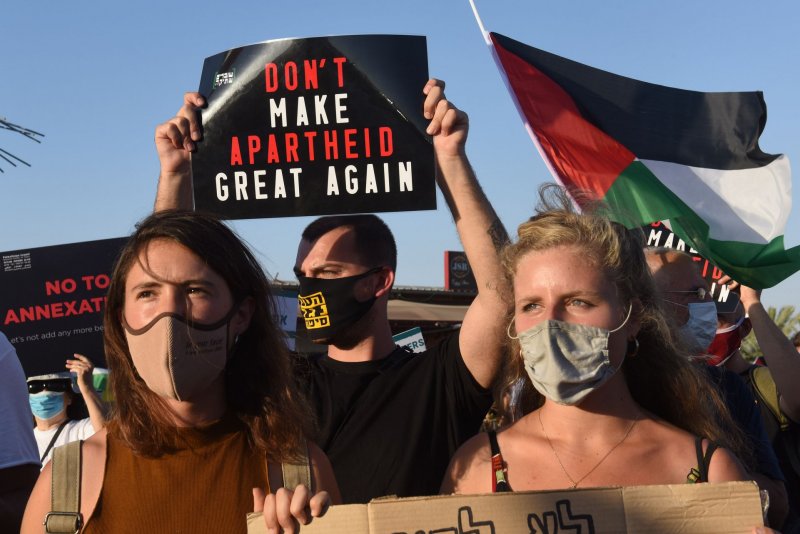 Human Rights Watch could do with a new pair of glasses. The organization’s new report, “A Threshold Crossed — Israeli Authorities and the Crimes of Apartheid and Persecution,” is blind to fact and reality. Every paragraph in the 213-page diatribe serves one goal: brand Israel as an apartheid state.

I left South Africa as a teenager in 1965 because of its policy of apartheid. I have openly and consistently criticized Israel’s settlement policies. And I am on the left of the Israeli political spectrum.

To me, this document cheapens and derides both the word “apartheid” and its legacy.

It is a disgrace to the memory of the millions who suffered under that policy in South Africa — including many anti-apartheid activists in the Jewish community, some close to me, who lost their freedom and were left shattered in consequence.

The argument of the Human Right Watch report is that, in the swath of land between the Mediterranean Sea and Jordan River, “authorities have dispossessed, confined, forcibly separated and subjugated Palestinians by virtue of their identity to varying degrees of intensity” — actions “so severe they amount to the crimes against humanity of apartheid and persecution.”

The report accuses Israel of racial discrimination and domination over all Palestinians, including those who live within Israel proper. It does draw distinctions between the state of affairs in Israel, the West Bank and Gaza to varying degrees, reserving its clearest conclusions about the crimes of apartheid for the areas beyond Israel’s 1948 borders, including East Jerusalem. But that distinction will be lost on most readers of the report or the headlines about it.

And the distinction is essential: there are huge variations in policy between sovereign Israel, where democracy reigns; the occupied West Bank, which remains under overall military rule; and Gaza, from where Israel fully withdrew its army and settlements in 2005, and where Hamas now holds power. But even with those distinctions included, the implication that Israel’s “racist policies” against the Palestinians should be examined through the same framework across the three territories is disingenuous.

The report reads as especially surprising now, as Mansour Abbas, leader of the United Arab List in the Knesset, holds Israel’s political future in his hands as a result of the March election. His voice is key in determining who will form the next governing coalition in Israel: Benjamin Netanyahu and his far-right cohorts, or the anti-Netanyahu camp. Both groups are courting Abbas, hardly a sign of the kind of subjugation associated with apartheid.
The authors tie their claim that Israeli officials have committed the crime of apartheid to two international rulings: the 1973 International Convention on the Suppression and Punishment of the Crime of Apartheid and the Rome Statute of the International Criminal Court, which was written in 1998 and went into effect in 2002.

“Some have claimed that the current reality” in Israel “amounts to apartheid,” the report states. “Few, however, have conducted a detailed legal analysis based on the international crimes of apartheid or persecution.” That analysis is what this report claims to achieve. Really?

Justice Richard Goldstone, who was appointed to the Constitutional Court of South Africa by Nelson Mandela and played a critical role in that country’s transition to democracy, also served as the chief prosecutor of the United Nations International Tribunal for the former Yugoslavia and Rwanda, then led the United Nations Human Rights Council fact-finding mission to investigate human-rights and humanitarian-law violations in the 2009 war between Israel and Gaza militants.

“In Israel there is no apartheid,” Goldstone wrote in The New York Times in October, 2011. “Nothing there comes close to the definition of apartheid under the 1998 Rome Statute.”

In the West Bank, he conceded, the situation is more complex. But crucially, he wrote, there is no intent to maintain “an institutionalized regime of systematic oppression and domination by one racial group.”

“The charge that Israel is an apartheid state is a false and malicious one that precludes, rather than promotes, peace and harmony,” Goldstone concluded.

Yes, he wrote those words 10 years ago, and much has changed in the past decade. But his perspective persists.

In October 2009, Robert Bernstein, the founder of Human Rights Watch and its chairman for 20 years, slammed the door on the organization for “issuing reports on the Arab-Israel conflict that are helping those who wish to turn Israel into a pariah state.”

“We always recognized that open, democratic societies have faults and committed abuses,” he wrote that year in The Times. “But we saw that they have the ability to correct them through vigorous public debate, an adversarial press and many other mechanisms that encourage reform.”

That idea of a society attempting to improve itself is a uniquely apt one for Israel today, as much of the country fights to rid itself of the yoke of Netanyahu and his expansionist partners, stem the drift toward the unilateral annexation of the territories and continue to seek a solution to the conundrum posed by the Palestinian issue, albeit without a strong and unified partner present on the other side.

Last summer, I wrote in The Atlantic that if the threatened annexation of the West Bank became reality, it would be had for me to continue to make the case that Israel’s rule over the Palestinians was much different than the institutional racism I had left behind in South Africa. But that did not happen.

Ironically, much of the case Human Rights Watch lays out draws on the work of watchdog groups based in Israel, making the precise efforts toward reform that the report leaves no room to acknowledge. None of those groups — more than 40 in all — would have been able to function under a true apartheid regime. As I saw happen to the activists I knew in South Africa, under apartheid, those groups’ staff would instead be doing time behind bars without the benefit of a trial.

Human Rights Watch has long backed a boycott of Israel and Israeli goods to no real effect. It’s no surprise, with that history, that rather than address the facts in front of them, the group’s staff has chosen to produce a document that draws overly broad conclusions that match their pre-disposed view.

Maybe it is time for a watchdog to protect us all from the likes of Human Rights Watch.