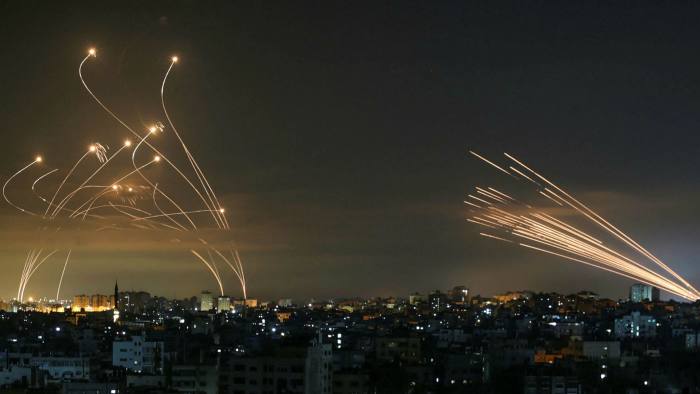 Hamas missiles are intercepted by anti-missile missiles over Israel.

As soon as an enemy missile approaches, the Israelis fire defensive missiles into the air.

Israel under constant fire: over 3,100 rockets were fired from the Gaza Strip in one week.
DUKAS

Israel under constant fire: over 3,100 rockets were fired from the Gaza Strip in one week.

Hamas is also firing rockets against Israel from Rafah.

Foreign Minister Ignazio Cassis publicly asked whether UNRWA was “part of the solution or part of the problem”.

3100 missiles in a week! Never before have the radical Palestinians targeted Israel so intensely. The terrorist organization Hamas and the Islamic Jihad group have amassed an extensive arsenal of weapons. The Israeli secret service speaks of at least 13,000 rockets that are still ready to be fired.

Some of the missiles were delivered on smuggling routes from Iran. In the meantime, however, the extremists in the Gaza Strip can also manufacture M-75 missiles themselves on instructions from Iran.

Today Hamas is financed by exiled Palestinians, Iran and private sponsors from Arab countries. The German “Bild »newspaper indirectly accuses the United Nations Relief Organization for the Palestinians (UNRWA), founded in 1949, of supporting Hamas. Their general commissioner is a Swiss: Philippe Lazzarini (57).

UNRWA has a budget of around CHF 800 million, to which Switzerland contributes a little over CHF 20 million annually. The aid organization uses the money to finance refugee camps and almost 30,000 employees who look after a total of 5.5 million people.

The work in Gaza in particular is problematic: most of the UNRWA employees are local residents, many of whom sympathize with Hamas or are even members themselves. There is talk of infiltration.

Rockets that Hamas had hidden there have even been found in UNRWA schools in the Gaza Strip. Another point of criticism are school books in which Israel does not exist.

2018 continued Simon Wiesenthal Institute UNRWA in fifth place in the ranking of “anti-Semitic incidents”. A study by UN-Watch described the course of the line between UNRWA and Hamas in the Gaza Strip as vague.

Countries like the US and Canada therefore threatened to stop their payments. Switzerland also got on the brakes. The Federal Council demanded in 2018that UNRWA is investigating all allegations of “anti-Semitism and hate speech” and bringing wrongful employees to justice.

Because there were also inconsistencies on the executive floor, a payment was suspended in July 2019. Foreign Minister Ignazio Cassis (60) publicly asked whether UNRWA was “part of the solution or part of the problem”.

Payment only for a limited period

However, in the absence of a political solution to the conflict, the FDFA regards UNRWA as a key figure for stability in the region. At Blick’s request, the FDFA stressed that it did not support any organization that aroused “hatred, violence, racism, anti-Semitism or the destruction of Israel”. This is checked with mechanisms such as “regular dialogue, on-site visits, annual hearings and external evaluations”.

The aid organization will continue to receive money from Switzerland, but with one restriction: The Federal Council has decided the annual support of 20 million francs each instead of the usual four-year support for two years.

UNRWA in Gaza did not respond to a request from Blick on Monday.