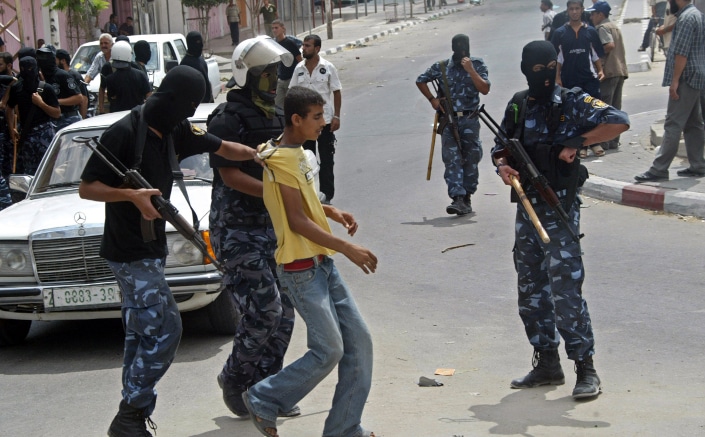 Palestinian human rights organizations called for an emergency meeting held at Al-Haq Foundation, following the attacks by the security services on participants in the peaceful gatherings that were organized during the past days in the center of Ramallah, to express their condemnation of the killing of political activist Nizar Banat, during He was arrested by the security services.

Human rights organizations condemn the attacks carried out by the security services in uniform and civilian clothes on the participants in the recent peaceful gatherings, through their use of excessive force against the demonstrators; They were attacked with batons and stones, and dragged on the ground. These elements also fired tear gas canisters extensively in the midst of the city while civilians were present in it. These attacks hit journalists, and their press equipment was withdrawn and confiscated. The elements also interfered with the work of some field research teams for human rights organizations, and confiscated their phones.

Human rights organizations warn of the repressive approach adopted by the security services towards citizens’ exercise of the right to peaceful assembly guaranteed in Palestinian legislation and basic international conventions related to human rights. They also warn of the presence of elements in civilian clothes who attack participants in peaceful gatherings, without any interference by the bodies. Security forces in uniform to protect the participants in those gatherings, and to stop the attacks on them. It also warns against allowing some parties to organize peaceful gatherings without others, which carries with it clear discrimination between citizens.

Human rights organizations stress that the right to peaceful assembly and freedom of opinion and expression must be respected as constitutional rights guaranteed in the Basic Law and international human rights conventions to which Palestine has acceded, and that assaulting them constitutes a constitutional crime described in the Palestinian Basic Law, and a grave violation of the obligations of the State of Palestine resulting from its accession to international conventions , which requires accountability and accountability of all those who contributed to committing these crimes.

Human rights organizations stress that elections are the way out of the current crisis, in a way that guarantees political participation, restores the institutions of the political system, promotes the values ​​and principles of good governance, and maintains and respects the principle of the rule of law and the separation of powers, which requires issuing a decree to hold legislative, presidential and National Council elections immediately.
Human rights institutions affirm their role in following up all violations of the rights and freedoms of citizens, and hold the executive authority legal and national responsibility for the dangerous decline and deterioration of the human rights and fundamental freedoms situation. Human rights institutions also formed an emergency committee to follow up on the repercussions of recent events, to study all options and tools available at the level of national and international mechanisms for the protection of human rights and freedoms.

The human rights organizations that signed the press release: