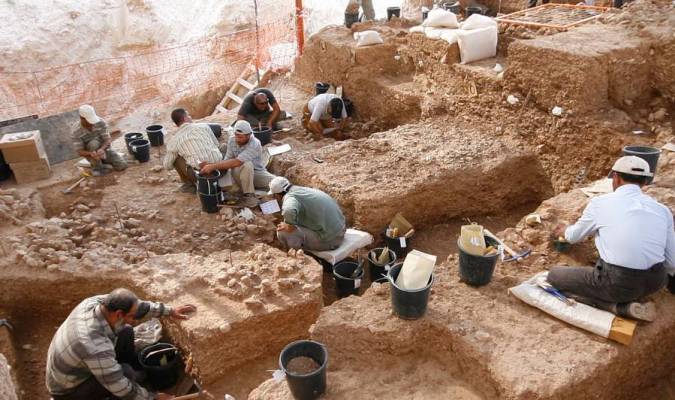 Great excitement has broken out following the discovery in Israel of prehistoric bones identified as Homo Nesher Ramla, a hitherto unknown species of human.Following some research, thanks to Google, I put together a list which should elicit some pertinent comments.

Can you tell which the odd one out is?

If you picked the last species you have hit the jackpot.

The first five are well and truly extinct and only their bones give experts any clue as to their vintage and location.

The last one is unfortunately not extinct and has mutated beyond the grave into the multitude that today challenge us with their age-old and dare one say, prehistoric poisonous pontifications. Unlike all other Homo Sapiens who were confined to certain clearly delineated areas the latter have migrated to all parts of the globe and can be found flourishing in almost every society, even in those places where Jews have never inhabited or settled.

It is ironic that the latest discovery should have taken place in the very country which now is the focus and target of modern-day Neanderthals. These individuals spend all their waking hours trying to prove that Jews never inhabited this Land, that the Temples of Solomon and Herod never existed and that those who call themselves Palestinians these days are direct descendants of the ancient Canaanites. No amount of archaeological evidence disproving these specious claims will ever convince those seeking to delegitimize Jewish sovereignty here.

This past week has seen yet more attempts by “friend” and foe alike to dig up discredited policies from the past and then try to foist them onto an Israeli public already totally turned off from previous lethal failures.

It never ceases to amaze me how for example many emissaries of countries which profess to admire and support Israel can then turn around and at world forums vote to censure us. Thus, the UK Foreign Secretary can put his hand over his heart and declare that “you can always rely on us!”  Having uttered this platitude on a recent whirlwind visit to Israel one has to question his country’s condemnation of Israeli sovereignty in Jerusalem and elsewhere and wonder why the UK does not do something to prevent Iran’s race to obtain nuclear bombs.

Recently an Israeli woman who also has dual UK nationality renewed her passport. She was born in Jerusalem which as far as she was aware is part of Israel. Imagine her surprise when after receiving her new passport she noticed that her place of birth was recorded as “occupied Palestine.” So much for relying on the UK to have her best interests at heart.

The UK is not the only country which displays two-faced hypocrisy. China and Russia which profess great “love” for us are consistent supporters of the terror promoting regime in Tehran and vote against Israel every time Hamas fires rockets at our civilians. Many democracies in the EU plus others like New Zealand say they wish us well and then turn around and vote in favour of the most outrageous resolutions in UN-sponsored forums.

If this sort of duplicitous diplomacy is evidence that we can rely on so-called friends, we are doomed from the start. The Czechs thought that they could rely on British and French promises to save them pre 1939. Well, we all know how that turned out.

President Biden has assured President Rivlin that Iran will not get nuclear offensive capability “on his watch.”  Can anyone explain how dropping sanctions, returning to an already failed non-agreement and no restraint on developing missiles to deliver weapons of mass destruction can lead to the fulfilment of this pledge? With the installation of a new Iranian President who has a decidedly murky human rights record and an ongoing desire by the rest of the world not to upset the regime, who in their right mind would mortgage their future on such a worthless guarantee? Shades of Munich all over again.

Nothing better exemplifies dubious expressions of reliability than the lemming-like mantras of support for the corrupt and increasingly fossilized Ramallah leadership. As evidence mounts on a daily basis of how Abbas and his collaborators suppress human rights, foster hate and incitement and “do away” with vocal opponents, the international community turns a blind eye and continues to babble about a democratic Palestinian State. Although reality is staring them in the face and anyone with even a faint amount of common sense can see that democracy and human rights, let alone an acceptance of a Jewish presence is a mirage as far as Ramallah and Gaza are concerned, the facts do not seem to register in any shape or form.

Whether it is 73 Democratic Congress members (including 7 Jews) demanding that Biden condition aid to Israel and declaring ALL Israeli settlements, including Jerusalem, illegal or a UK Labour Party official lamenting that combating antisemitism and supporting Israel has seen the party hemorrhaging Muslim votes the bottom line is the same. It was reported that the Biden Administration was “pushing” Ramallah to reform their terror payment policy. Note the word, reform, rather than cease payment to murderers of Israelis.

For Abbas and his friends, anything Israel does is a “provocation.” In fact, the very presence of Jews is a provocation not only for the PA, Hamas, Hezbollah, the Hashemite Kingdom of Jordan and their sponsors but also apparently for those in the UN who support them.

One of the most bizarre sights is the unadulterated “love” showered on the leader of Fatah by Jewish “progressives” whether they are deluded Israelis or living elsewhere in the paradise of the galut.

Nothing exemplifies this better than the remarks made by a former Israeli Prime Minister in a recent zoom session with an Australian writer and scholar. For those with a short memory, Ehud Olmert is the ex-PM who tried to give away everything including the kitchen sink to Mahmoud Abbas. This included almost all of Judea and Samaria and surrendering Jewish sovereignty over the Temple Mount and the historical old city of Jerusalem. Fortuitously Abbas refused this “fire sale offer” and Olmert subsequently departed from the Knesset for another residence.

One would imagine that given all the available evidence proving that neither Abbas nor the PA / Fatah are partners for peace, progressive politicians might wake up to the real world. Unfortunately, this is not the case as exemplified by Olmert’s own words: “Mahmoud Abbas is a very qualified gentleman, a decent, peace-loving person. I like him. I trust him.”

If he was writing a fictitious novel I could understand the veracity of this assertion. However, coming from the mouth of a former Israeli PM and flying in the face of all available evidence the detachment from reality is stunning.

Have a look at this latest from PMW and then decide for yourselves whether Abbas is a “decent, peace-loving person.”

It is obvious that far too many individuals have still not discovered, despite overwhelming proof, the missing links between Israel/Zionist hate and hatred of Jews.