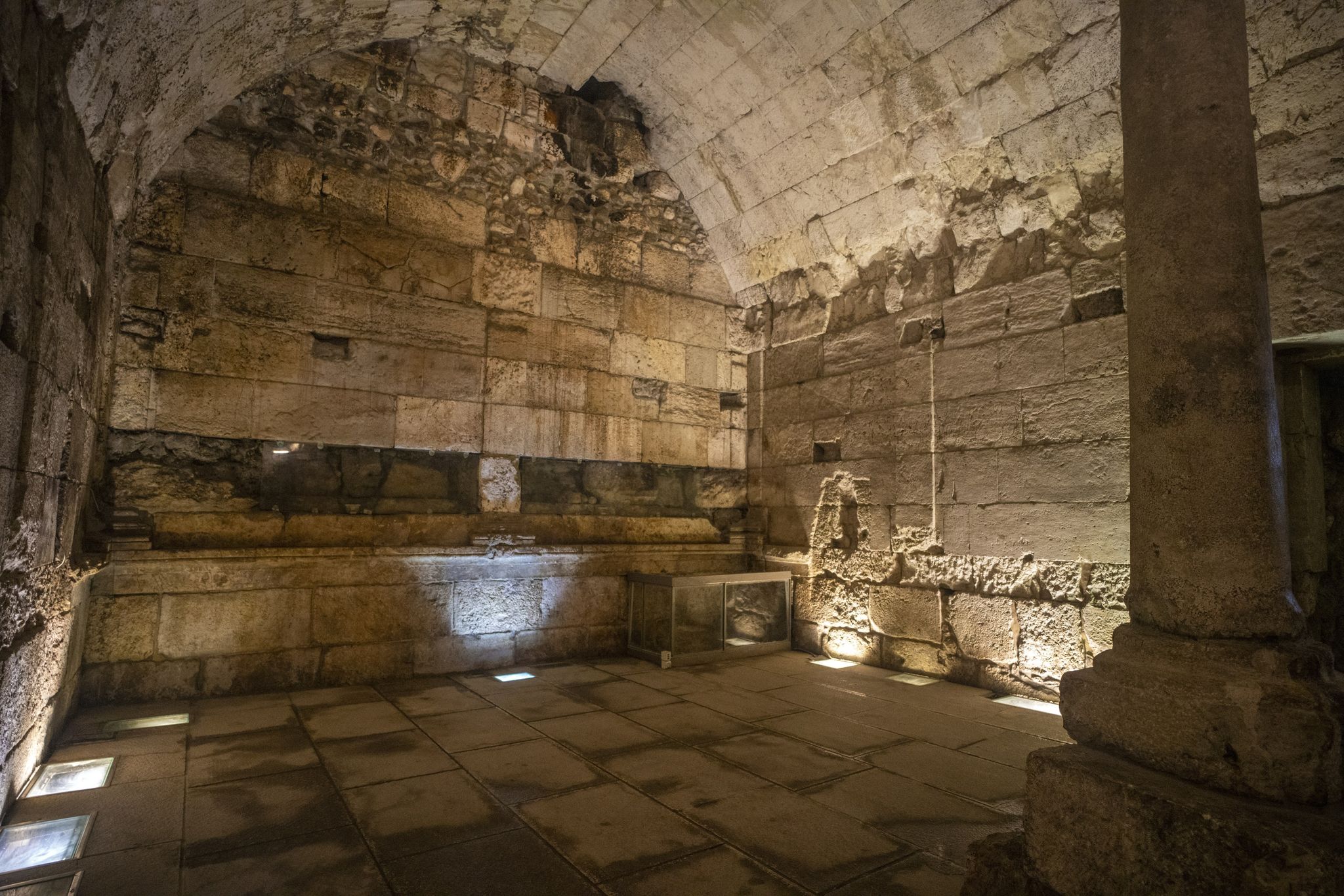 The Western Wall Heritage Foundation and the Israel Antiquities Authority are enabling the public to view impressive new sections of one of one of the most magnificent public buildings uncovered from the Second Temple period. The discovery – the fruit of archaeological excavations recently conducted in the Western Wall Tunnels – will be part of the new route opened to visitors ahead of Rosh Chodesh Elul and Slichot (Penitential prayers).

Part of the structure, to the west of Wilson’s Arch and the Temple Mount, was discovered and documented by Charles Warren in the nineteenth century, followed by various archaeologists in the twentieth century. Now that its excavation is complete, we know that it contained two identical magnificent chambers with an elaborate fountain between them. The walls of the halls and the fountain were decorated with a sculpted cornice bearing pilasters (flat supporting pillars) topped with Corinthian capitals. The decorative style of the building is typical of opulent Second Temple-period architecture.

Mordechai Soli Eliav, Chairman of the Western Wall Heritage Foundation says, “It is exciting to reveal such a magnificent structure from the Second Temple period while we mourn the destruction of Jerusalem and pray for its restoration. These chambers are part of a new walk through the Western Wall Tunnels, where visitors will view fascinating finds and walk for the first time along the entire route among Second Temple-period remains that illustrate the complexity of Jewish life in Jerusalem between the Hasmonean and the Roman periods.”

According to Dr. Shlomit Weksler-Bdolach, Excavation director on behalf of the Israel Antiquities Authority, “This is without doubt one of the most magnificent public building from the Second Temple period that has ever been uncovered outside the Temple Mount walls in Jerusalem. It was built in around 20–30 CE. The building, which apparently stood along a street leading up to the Temple Mount, was used for public functions – it may even have been the city council building where important dignitaries were received before entering the Temple compound and the Temple Mount. Visitors to the site can now envisage the opulence of the place: the two side chambers served as ornate reception rooms and between them was a magnificent fountain with water gushing out from lead pipes incorporated in the midst of the Corinthian capitals protruding from the wall. The excavation also uncovered the original massive stone slabs with which the ancient building was paved. The archaeologists believe that the guest rooms, which were also used for dining, contained wooden reclining sofas that have not been preserved.

Reclining dining rooms were common in the Greek, Hellenistic, and Roman worlds from the fifth century BCE to the third–fourth centuries CE. They are known in the archaeological record from private homes, palaces, temples, synagogue complexes and civilian compounds. Dining or feasting while reclining is mentioned as early as the Book of Amos – in the first half of the eighth century BCE – when the prophet rebukes the people of the Kingdoms of Judah and Israel.
In the late Second Temple period, before the Temple’s destruction, extensive changes made throughout the area included alterations to the building, which was divided into three separate chambers. In one of the chambers, a stepped pool was installed that was used as a ritual bath.”

Shachar Puni, architect for the Israel Antiquities Authority’s Conservation Department explains, “The new route provides a better understanding of the complex and important site known as the Western Wall Tunnels, while emphasizing the extent of this magnificent building. It creates a new visitors’ route that passes through the building and leads to the spacious compound at the foot of Wilson’s Arch (one of the bridges leading to the Temple Mount), which was also excavated by the Western Wall Heritage Foundation and the Israel Antiquities Authority. By making the route accessible and opening it to the public, visitors are introduced to one of the most fascinating and impressive sites in the Old City of Jerusalem.”

1–4. Remains of the magnificent 2000-year-old building recently excavated and due to be opened to the public.

5–6. Remains of the splendid fountains that operated in the magnificent 2000-year-old building

7–8. Stepped pool installed in one of the chambers in the late Second Temple period that served as a ritual bath.