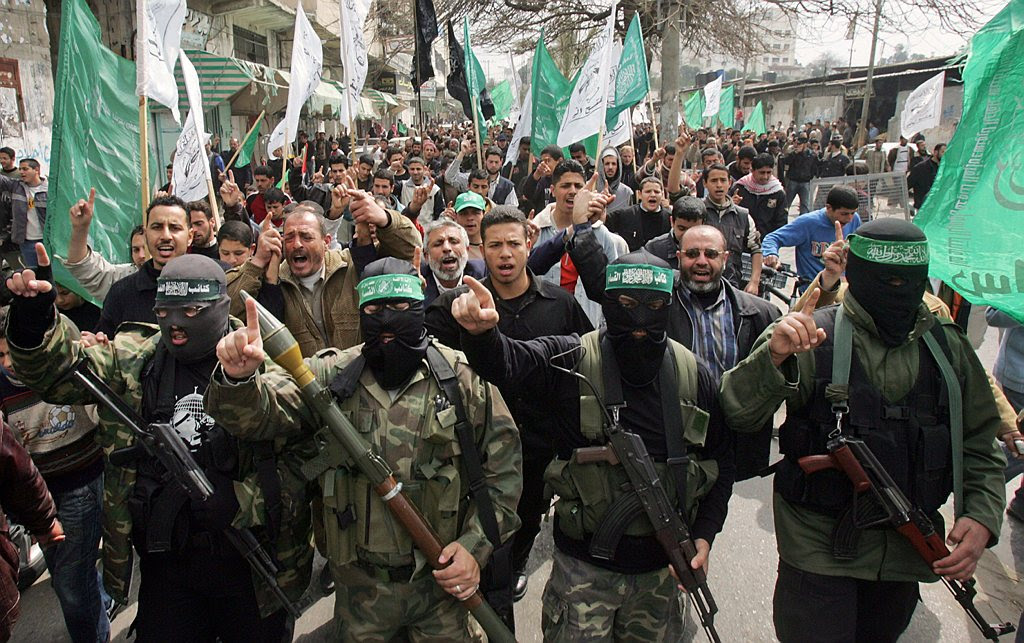 The mainstream narrative organizations (formerly known as “news outlets”) refuse to label Palestinian terrorist groups as such, preferring softer marketing terms like “extremist” and “militant.” To be clear, the United States and many governments specifically and officially designate foreign terrorist organizations (FTOs) to “play a critical role in our fight against terrorism and are an effective means of curtailing support for terrorist activities and pressuring groups to get out of the terrorism business.“

Here is a list of the Palestinian terrorist groups.

HAMAS. This terrorist group is responsible for hundreds of attacks and murder of civilians. It’s foundational charter reeks of anti-Semitism and calls for the destruction of the Jewish State of Israel. It is highly popular among Palestinians, winning 58% of parliament in 2006 and its leader is projected to win the presidency according to recent Palestinian polls (should elections ever take place), amounting to millions of supporters. The political-terrorist group runs Gaza, and has launched repeated wars and skirmishes against Israel.

Palestine Liberation Front (PLF). Broke away from the PFLP-GC in mid-1970s. Later split again into pro-PLO, pro-Syrian, and pro-Libyan factions. Several terrorist attacks including the hijacking of the Achille Lauro and an attack near a beach in Tel Aviv.

Palestine Islamic Jihad (PIJ). Originated among militant Palestinians in the Gaza Strip during the 1970s as a series of loosely affiliated factions rather than a cohesive group. Committed to the creation of an Islamic Palestinian state and the destruction of Israel through holy war. Conducted suicide bombings against Israeli targets in the West Bank, Gaza Strip, and Israel. Has threatened to attack US interests in Jordan. Receives financial assistance from Iran and limited assistance from Syria.

Popular Front for the Liberation of Palestine (PFLP). Marxist-Leninist group founded in 1967 by George Habash as a member of the PLO. Joined the Alliance of Palestinian Forces (APF) to oppose the Declaration of Principles signed in 1993 and has suspended participation in the PLO. Broke away from the APF, along with the DFLP, in 1996 over ideological differences. Has made limited moves toward merging with the DFLP since the mid-1990s. Committed numerous international terrorist attacks during the 1970s and against Israelis after the signing of the Oslo II Accords. Receives most of its financial and military assistance from Syria and Libya.

PFLP-General Command (PFLP-GC). Split from the PFLP in 1968, claiming it wanted to focus more on fighting and less on politics. Led by Ahmad Jabril, a former captain in the Syrian Army, who just died. Headquartered in Damascus with bases in Lebanon and cells in Europe, it receives logistic and military support from Syria and financial support from Iran.

Al-Aqsa Martyrs Brigade (AAMB). Group aims to drive the Israeli military and Jewish residents from the West Bank, Gaza Strip, and Jerusalem and to establish a Palestinian state via terrorism, including shootings and suicide operations. At least five Americans were killed by the group. The group is more secular than HAMAS which is Islamist.

Army of Islam (AOI). Based in Gaza, it is viewed as even more extreme than HAMAS. It has conducted a number of kidnapping raids into Israel, including that of Israeli soldier Gilad Schalit.

The following Palestinian terrorist groups were removed from official designation:

Democratic Front for the Liberation of Palestine. A member of the Palestinian Liberation Organization (PLO), it has a more moderate stance than many fellow organizations. For example, it was opposed to attacks against Jews and Israelis outside of Israel and it is not Islamist. While it committed several terrorist attacks in the 1970’s, the deep-Islamist turn of Palestinian society with the rise of HAMAS marginalized the group. It was the group primarily credited for advancing the notion of a “two-state solution” inside of the PLO which made the US drop the FTO designation in 1999.

Abu Nidal Organization (ANO). Group carried out terrorist attacks in 20 countries, killing or injuring almost 900 persons. Targets included the United States, the United Kingdom, France, Israel, moderate Palestinians, the PLO, and various Arab countries. Major attacks included the Rome and Vienna airports in December 1985, the Neve Shalom synagogue in Istanbul and the Pan Am Flight 73 hijacking in Karachi in September 1986, and the City of Poros day-excursion ship attack in July 1988 in Greece. Suspected of assassinating PLO deputy chief Abu Iyad and PLO security chief Abu Hul in Tunis in January 1991. The group went inactive with the death of Abu Nidal in 2002, and the US removed it as an FTO in 2017 when President Trump tried to prod Palestinian Authority President Mahmoud Abbas to stop payments to terrorists (it didn’t work).

A day in Gaza City (Photo: AP/Khalil Hamra)
Palestinians have a remarkable number of terrorist groups dedicated to killing Jews and moderate Palestinians. It is equally remarkable that the press refuses to call them out.

The West Definitively Concludes Hamas is a Terrorist Group

The UN Does Not Want Palestinian Terrorists to be Held Accountable

The Proud Fathers of Palestinian Terrorists