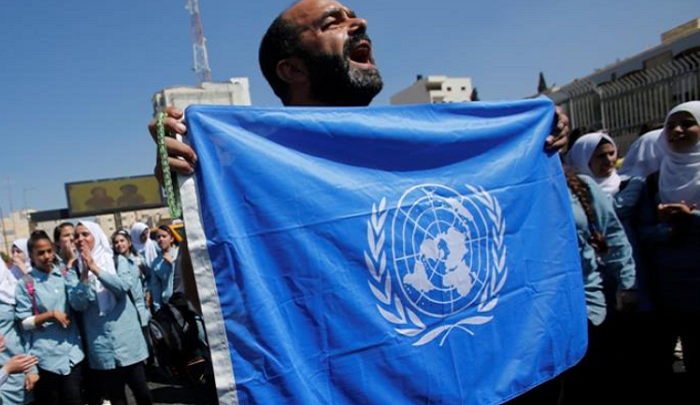 Congressional Republicans have recently introduced legislation to reintroduce President Donald Trump’s cessation of US aid to the United Nations Relief and Works Agency for Palestine Refugees in the Near East (UNRWA). Closing UNRWA and ending a decades-long, multigenerational “refugee” status for more than five million Arabs is long overdue, as documented in the 2014 book Roadblock to Peace: How the UN Perpetuates the Arab-Israeli Conflict – UNRWA Policy Reconsidered.

The author of the book, David Bedein, director of the Center for Near East Research in Jerusalem, a detailed, damning indictment against UNRWA. Founded in the wake of the 1948-1949 Israeli War of Independence, UNRWA was on a mission to care for Arabs who lost their homes in the territory that became Israel. Various estimates of their numbers ranged between 540,000 and 750,000.

“When UNRWA launched its operations on May 1, 1950, it was thought that as the refugee situation would soon be resolved, UNRWA would have a limited lifespan,” Bedein wrote. But since then, UNRWA’s mandate has been “renewed every three years by the UN General Assembly”. As will be analyzed in detail in a later article, the key to UNRWA’s survival lies in UNRWA’s refusal to apply ordinary resettlement procedures to these refugees and their proliferating “refugee” descendants. Rather, UNRWA is insisting that they “return” to modern Israel.

UNRWA is abnormal in other ways, as it shows an inordinate global focus on Palestinian refugees. As Bedein wrote, “UNRWA remains the only UN agency dedicated to treating exactly one ethnic group of refugees.” UNRWA thus “is in stark contrast to” the United Nations High Commissioner for Refugees (UNHCR), who “works on behalf of all refugees in the world.”

Compared to UNHCR, UNRWA has too many resources. UNRWA’s branches represent 17 percent of the world’s refugees, but UNRWA’s budget is more than a third of UNHCR’s resources allocated to all other refugees in the world. Accordingly, UNRWA compared 29,000 staff to 7,200 UNHCRs, a “ratio of one staff member per 161 and 2,100 refugees respectively,” Bedein noted.

UNRWA provides more comprehensive services in its 59 camps in Gaza, Jerusalem, Jordan, Lebanon, Syria and the West Bank than UNHCR. “While UNRWA provides education and health care, UNHCR usually expects the refugees to help,” Bedein noted. UNRWA also “duplicates services and funds those qualified for services from other locations,” especially “in Jordan, where Palestinian Arab refugees and their descendants are Jordanian citizens.”

UNRWA services have also attracted fraud from the start. As early as 1950, UNRWA had registered 962,000 alleged refugees, a far greater number than any realistic calculation of Arab refugees during the Israeli War of Independence. In addition, UNRWAs loose definitions includes anyone as a refugee who fled what became Israel in 1948-1949 after having lived there only “during the period from June 1, 1946 to May 15, 1948.”

In addition, some registered with UNRWA have “a penchant for falsifying data on births and deaths,” Bedein noted. Meanwhile, “UNRWA Commissioner General Peter Hansen acknowledged in 2001 that UNRWA does not require refugee identity cards for the distribution of services.” Elsewhere in the “world — North America, Europe, Arab countries — there are individuals listed by UNRWA who carry the agency’s ID card.”

UNRWA aid has made “camps” a misnomer for UNRWA housing, Bedein noted:

UN camps have, for the most part, evolved into urban neighborhoods with two- and three-storey stone houses. Though overcrowded, UNRWA homes now provide electricity, running water, sewage, and telephone lines, along with modern appliances. In some cases, international donations have enabled the construction of what amounts to modern apartment buildings; some are refined to the point of luxury.

Nearly all UNRWA employees are registered with UNRWA as refugees, but evidence suggests they have little interest in solving UNRWA’s refugee problem, Bedein noted:

UNRWA is seen as preserving its own interest in continuing its work; the refugees are not convinced (nor is there any reason why they should be) that UNRWA has a vested interest in solving their problem. Finally, if the refugee problem is solved, 29,000 Palestinian refugees could lose their UNRWA jobs.

Americans have special reasons to consider UNRWA’s mistakes, as the United States has been largest donor, accounting for about 30 percent of UNRWA’s budget (currently $1.5 billion), followed by the European Union. More disturbing than UNRWA’s bloat and mismanagement, the organization actually seeks the demographic destruction of Israel, as will be discussed in a future article.