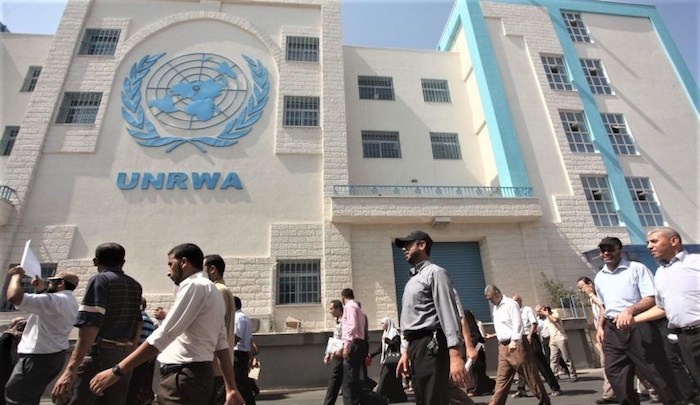 The United Nations Relief and Works Agency for Palestine Refugees in the Near East (UNRWA) has turned “their plight into a political tool” for Israel’s destruction, Center for Near East Policy Research (CNEPR) Director David Bedein noted in 2014. His book, Roadblock to Peace: How the UN Perpetuates the Arab-Israeli Conflict—UNRWA Policies Reconsidered, is essential for understanding UNRWA’s cruel exploitation of humanitarianism in order to wage war on Israel.

As previously discussed, over five million Palestinian “refugee” descendants of Arabs who lost their homes in what became Israel during its 1948-1949 War of Independence are the wards of UNRWA. This outsized agency uniquely exists outside of the United Nations High Commissioner for Refugees (UNHCR), which cares for all other refugees worldwide. UNRWA has also uniquely emphasized a “right of return” to modern Israel as a permanent solution for Palestinian “refugees.”

They “are the only ones in the world who have sustained their status as refugees across four generations; and their misery has been utilized as a weapon against Israel,” Bedein wrote. Any “right of return” influx would demographically inundate Israel. Thus, “Israel understands that ‘return’ is a code word for destruction, something the Jewish state will never permit,” he added.

Indeed, Bedein quoted Egyptian Minister of Foreign Affairs Muhammad Saleh Ed-Din to this effect. He wrote in 1949 that “in demanding the restoration of the refugees to Palestine, the Arabs intend that they shall return as the masters of the homeland” and “annihilate the state of Israel.” As Bedein reviewed, the

‘Right of Return’ issue was often mentioned in Arab forums within the wider context of the discussion of Israel’s liquidation. In Israeli eyes, therefore, the continued persistence on the ‘Right of Return’ by any Arab party betrays that party’s desire to wipe Israel off the map.

“Tragically, UNRWA emphasis on ‘right of return’ provides Palestinians with a rationale for their war against Israel,” Bedein observed, and correspondingly UNRWA “camps, quite simply, function in a pro-terrorist environment.” “Terrorist activity in the UNRWA refugee camps has been extensively documented” by monitors such as the Israeli Shin Bet intelligence service, he wrote. Shin Bet has “documented how UNRWA schools are used for storing ammunition, as well as for hiding suspected terrorists,” while UNRWA vehicles and ambulances also transport terrorists and ammunition.

UNRWA refugee camps have become centers of paramilitary activity. In UNRWA camps terrorists are nurtured from a young age, and then recruited, trained, and dispatched, while weapons are manufactured; and UNRWA facilities are utilized for hiding terrorists and weapons.

UNRWA’s incubation of terrorism is unsurprising, Bedein observed, for “UNRWA makes no attempt to determine if its beneficiaries have terrorist connections.” “UNRWA, as a matter of policy, performs no security screening or background examinations while recruiting staff in the West Bank and Gaza,” he wrote, a contrast with UNRWA operations elsewhere. “In Jordan, Syria and Lebanon, careful vetting of applicants for UNRWA staff positions does occur.”

Extensive Hamas infiltration of UNRWA previously led to American demands that UNRWA vet for terrorists, but UNRWA agreed “only to verify terrorist ties to Al-Qaida and the Taliban,” Bedein noted. “Amazingly UNRWA’s terrorist vetting process does not include Hamas, Hezbollah,” or other terrorist groups threatening Israel, the “very terror groups that operate in UNRWA’s environs,” he marveled. While American law requires that American aid to UNRWA not benefit terrorists, UNRWA policy is “don’t ask, don’t tell.”

“The overwhelming predominance of Hamas-affiliated individuals within the population of teachers hired by UNRWA is particularly troublesome,” Bedein highlighted. Before being assassinated by Israel in 2004, for example, Hamas leader Sheikh Ahmed Yassin had been an UNRWA teacher. His funeral occurred at an UNRWA school for boys at the Balata refugee camp in Nablus, where veiled Hamas terrorists held mockups of Hamas’ Qassam rockets and gave gifts to “martyr” families. Likewise, many members of Hamas’ military wing, the al-Qassam Brigades, were previously active in UNRWA schools in Hamas’ youth movement, al-Kutla al-Islamiya.

“Over half of UNRWA’s general budget is dedicated to education,” Bedein noted, yet UNRWA’s Palestinian Authority school textbooks hardly have edifying effects. Therein Israel is depicted “as evil in its very essence,” he noted, as elaborated by a subsequent 2017 CNEPR study coauthored by the Israeli academic Arnon Groiss. As he noted to this author during a March 21, 2016, interview and a CNEPR Capitol Hill briefing the subsequent day, these textbooks present “violent return with jihad” as the answer for the Palestinian “refugees.” “The textbooks used in UNRWA’s schools never discuss any other possible solution to the Palestinian refugee problem,” Bedein previously wrote in 2014.

Such venomous hate repudiates commonplace falsehoods about the December 11, 1948, United Nations General Assembly Resolution 194 as a legal basis for the Palestinian “right of return.” The resolution stipulated as a precondition for any return of Arabs to their former homes in Israel that these refugees “live in peace” with their neighbors. “How it might be determined if the Palestinian refugees would truly wish to ‘live in peace’ with their Israeli neighbors has never been addressed,” Bedein noted. Today “there is no evidence that the Palestinian refugee population has peaceful intentions, nor did they hold these intentions at the outset.”

Contrary to UNRWA mythologies, Bedein reviewed the “historical context” of the Palestinian “refugees.” Firstly, the “refugee situation was created as a result of aggression against Israel, and at the urging of Arab leaders, and thus is not Israel’s responsibility.” Secondly, in the years following 1948,

more than 850,000 Jews from Arab lands were driven from their homes; with no recompense from these Arab lands and no assistance from the international community. They were absorbed by Israelis. Essentially, the situation represents an exchange of populations.

While UNRWA “mandates the perpetuity of refugee squalor,” Israel’s integration of Mizrachi Jews serves Bedein as a model for helping Palestinian “refugees,” who “should be encouraged by a peace process to get on with their lives.” “All over the world, resettlement is utilized in order to allow refugees to go on with their lives,” he explained. Meanwhile UNRWA “has done a disservice to the refugees registered on its rolls, for it has encouraged them to expect a ‘return’ to former homes that will never take place.”

By contrast, UNHCR brought several hundred Palestinian “refugees” in 2008 from Iraq to Chile, Bedein noted. They had fled in 1948 to Iraq, where eventually Iraqi dictator Saddam Hussein became their benefactor. After the American-led coalition toppled him in 2003, Hussein’s clients fell out of favor, and Chile successfully gave them a new home.

At the 2016 CNEPR Capitol Hill briefing, Palestinian human rights activist Bassem Eid, who himself grew up in an UNRWA camp in Jerusalem’s Shu’fat neighborhood, agreed with Bedein. Eid noted a 2009 survey, in which 70 percent of diaspora Palestinian respondents preferred compensation for material losses during the 1948 flight, rather than any “right of return.” He condemned UNRWA for “trying to survive on the suffering of the Palestinian people.”

Given UNRWA’s record, UNRWA aid from taxpayers in the United States and other Western countries is astonishing and needs to end. UNRWA foments hate and violence against Israel as part of a long-term strategy to destroy Israel with millions of “returning” Arabs. Western donors should stop financing this jihad that uses those in UNRWA’s care as cannon fodder and redirect resources to creating new lives beyond conflict with Israel.