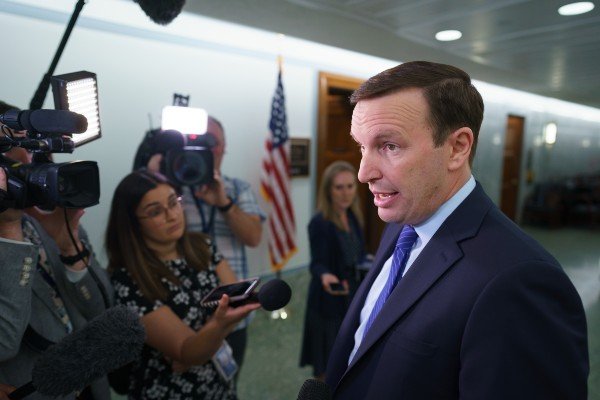 A group of four Democratic U.S. Senators visiting the Mideast are due to arrive in Israel later this week. They would be the first delegation of American lawmakers to visit since Israel’s new governing coalition took power in June.

According to Haaretz, the group is being led by Sen. Chris Murphy (D-Conn.), chairman of the Senate Foreign Relations subcommittee that deals with the Mideast.

The delegation is focusing on issues of security and democracy. They are currently in Lebanon. Their itinerary also includes Greece and Tunisia, plus meetings with Palestinians in Judea and Samaria.

On arriving in Beirut on Wednesday, Murphy tweeted that he was looking “to work on a solution to the political and economic crisis in Lebanon and to build bridges with the new Israeli coalition government.”

The Senators have a mixed record on Israel.

In 2016, before president Barack Obama allowed the UN Security Council to pass a resolution condemning Israeli settlements, Murphy signed a letter sponsored by AIPAC urging Obama to veto the “one-sided” resolution. During Operation Guardian of the Walls in May, Murphy criticized Biden for not pressuring Israel into a ceasefire. Murphy also opposed the moving of the U.S. embassy to Jerusalem in 2018.

Ossoff, who is Jewish and just 34 years-old, opposes the boycott campaign against Israel but also supports diplomacy with Iran.

Blumenthal was a co-sponsor of the Israel Anti-Boycott Act of 2017, which made it a federal crime to for Americans to encourage or participate in boycotts against Israel and Israeli settlements. He supported the U.S. embassy being moved to Jerusalem.

In 2020, Van Hollen introduced an amendment to a spending bill to block U.S. funds from facilitating a much-discussed Israeli plan to annex 30 percent of Judea and Samaria.

The Senators’ visit comes in the wake of Prime Minister Naftali Bennett’s visit to Washington for talks with President Joe Biden and Defense Minister Benny Gantz’s visit to Ramallah for discussions with Palestinian Authority Mahmoud Abbas.