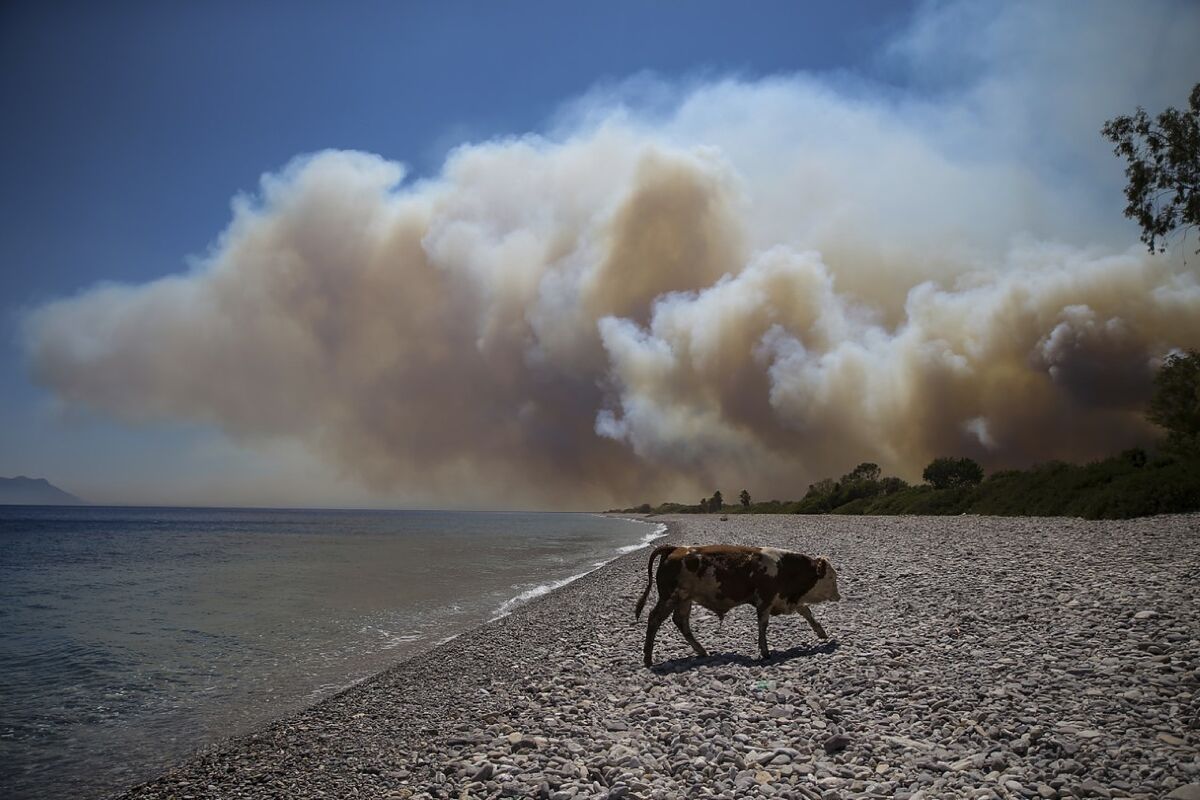 The high priests of climate change are predicting that in the near future we may be engulfed by rising ocean levels.

Rising temperatures are certainly causing climatic extremes from severe droughts to torrential floods, ice caps melting and islands in danger of being submerged. These meteorological changes affect large swathes of the globe and target populations regardless of their ethnicity or religious beliefs.

At the same time, another sort of climatic change is presenting a serious challenge to Jews alone. This dark and menacing storm front has gathered strength in recent times and now threatens to develop into a tsunami. Within most of our lifetimes, the waves of Judeophobia have swept all before them and have devastated the landscape, lives and habitations of almost every Jewish community on the continents of Europe, South America and even Africa. Once flourishing centres of Jewish learning have been obliterated in Arab/Islamic countries as well as in Spain and Portugal.

After the tides of pogroms, inquisitions, burnings and murder receded all that was left was the debris of looted institutions and cemeteries of dead Jews.

The optimists among us felt confident that never again could such tidal waves of hate ever engulf us. Little did they anticipate that in 2021 the climate of shame which descended at the end of the Shoah would rapidly dissipate and that before long more hurricanes and tornados of delegitimization and incitement would return.

Only those with short memories and unrealistic expectations, of which unfortunately there are still too many, continue to fantasize that the storm clouds building on the horizon are an illusion and will soon blow over. I have read how some individuals still stoutly maintain that their communities are insulated from or immune to the winds of hate gathering strength in places as diverse as Venezuela, Iran, Ukraine, Poland and Sweden, just to name a few places where Jews are prime targets.

Back in the “bad old days” when there were no social media to disseminate libels and slanders the conspiracy theories still spread faster than a whirlwind. That is why the Protocols of the Elders of Zion and accusations of world domination, plus assertions that Jews spread the plague and poisoned wells, became embedded in the minds of millions. Church theology portraying Jews as cursed forever helped to implant seeds of revenge and persecution in countless Christian countries. Unbelievable as it may seem to modern and rational people today many of these self-same fatal fables have not expired but are being recycled and spread to wider audiences thanks to the power of cyber communications. Accusing Jews of corona conspiracies is just one example of how old libels are being updated.

Lest you think that I am exaggerating the extent to which this virus of hate has survived into the 21st. century take a look at what is happening these days in the USA, the goldene medina. Discrimination and incitement against Jews is not as some would have us believe a recent development. Quotas in universities, exclusion from clubs and societies, violence by the German Bund groups in the 1930s and the Klu Klux Klan have now mutated into rabid hate not just from the fascist right but also the brainless left. Throw in a growing knee jerk antipathy towards Israel and supporters of Zion by some members of Congress, a complicit media, groups of certain minorities, revisionist theological dogmas denying a Jewish connection to the Promised Land and you have a perfect recipe for the targeting of Jews. Violence on the streets as well as attacks against Synagogues, cemeteries and communal buildings are on the increase.

A potential election candidate for Mayor of Washington DC is on record blaming the Rothschild Family for manipulating the climate and weather. Nonsensical as this may appear you can be sure that it has already been seen by millions of ignorant users of social media and like the medieval libels will remain embedded in the minds of those who are prepared to believe any sort of fantasy against Jews. Some of the disseminators of these falsehoods deny any sort of malicious intent when they are found out and exposed but of course, by then the damage has been done. The Protocols, although exposed as forgeries are still best sellers in some Islamic countries and elsewhere.

A recent survey revealed an endemic and worrying level of prejudice in European countries. The Labour Party in the UK may have ditched Corbyn as leader but it is finding it almost impossible to shed its Jew and Israel hating members.

Ireland (Eire) has the dubious distinction of being at the forefront of Jew and Israel haters in Europe. The other week the deputy chairperson of the Lower House of the Irish Parliament stated that “Israel is trying to accomplish Jewish supremacy.” In this one sentence, she managed to encapsulate both age-old Jewish conspiracy theories and modern-day Israel delegitimization. What is it in their background or DNA which makes them so allergic to us?

At the same time as a conference on antisemitism was taking place in Malmo, a neo-Nazi group projected hate messages on the walls of the synagogue.

What obsessive detesters of Israel fail to acknowledge is that their targeting of the Jewish State generates antipathy for the Jews who live there as well as elsewhere. Even well-meaning “friends” fall into this trap. We have just hosted Angela (“Mutti”) Merkel who is by all standards a genuine supporter of Israel and is at the same time an eloquent proponent of remembering the past murderous deeds of the German people towards Jews. What she, however, and like-minded politicians do not seem to understand is the negative ripple effect their policies towards Israel can have. It seems that they cannot or do not want to realize that applying double standards towards Israel contributes towards the perpetuation of double standards as far as Jews in general are concerned.

For example, visiting Yad Vashem, shedding tears and voicing contrition and then in the next breath condemning Jews for living in places called Judea, Samaria and Yerushalayim is nothing more than the height of hypocrisy. Enabling Iran to obtain the means to murder another six million Jews is not exactly a demonstration of “never again.” The sale of some submarines to Israel does not absolve Germany from the responsibility of turning a blind eye to the genocidal ambitions of the Mullahs.

Sending millions of Euros to the corrupt PA and facilitating their daily outpouring of Nazi-era libels against Jews and Israel is not exactly the actions of anyone who maintains that they do not want to see a repeat of what happened not so long ago. Voting in favour of 15 UN resolutions in 2019 alone which condemned Israel for every imaginable sin is not exactly a sign of German friendship.

How do we deal with this incoming tide of venom?

The first thing to remember is that we are no longer at the defenceless mercy of those who target us.

We must employ all the legal tools which are on the statute books of democratic countries. This means “lawfare” – i.e. the utilization of existing legal remedies to combat hate. Seeking punitive financial penalties can often work.

We must expose the nefarious activities of hate groups and ensure that they cannot hide and disguise their agendas. We must shame them unmercifully. No quarter or amnesty can be given to those, no matter how prominent, who promote lies and lend their names to campaigns of slander.

Education is obviously a critical component of any campaign but unfortunately, this is where we more often than not fall down. Holocaust studies are still not a compulsory history subject in many countries but even where it is the number of teachers with the required knowledge is sparse. A recent survey of teachers in England found that a majority does not know when the Holocaust began and moreover they lacked the knowledge to challenge myths about it.

The potentially lethal consequences of such educational deficiencies were recently brought home to me. At present, I am reading a most fascinating anthology of essays by children born in post-war Germany to parents who immigrated there. The editor explained that she herself was such a person. She recounted her first day at a German high school where she was the only Jewish pupil in class. A visiting Israeli journalist was introduced as a guest who wanted to find out the teenagers’ views on how they perceived Hitler. She remained quiet as her fellow classmates answered along the lines that although he was a dictator he had been good for Germany because he had built the autobahns and eliminated unemployment. Not once was the Shoah or murder of Jews and other “undesirables” mentioned. The headmaster who was present was embarrassed but it was a sobering lesson in how easily history can be discarded and distorted.

Israel, with all its imperfections, is the only country where we can actually fight back and make sure that the perpetrators of baseless hate against us pay a stiff price.

Trying to hold back the incoming tides with verbal acrobatics alone, as King Canute found out, is a futile exercise.