The Palestinian Authority is in deep crisis as the United States has sharply cut direct aid to the Palestinians and other assistance to them via the United Nations amid reports of misuse of funds and Congressional concern that aid was being diverted to terrorists, report several senior Palestinian officials.

“After a promising start, the US stopped the transfer of funds for development,” asserted Dr. Sufian Salameh, head of the Economic Department inside the Prime Minister’s bureau of the Palestinian Authority.

Dr. Salameh added that the US was “allowing only urgent humanitarian aid.”

Officially, the US Department of State contends that it is continuing aid, but a wide range of Palestinian and UN officials say that the US has sharply curtailed assistance to educational and development projects. [https://www.usaid.gov/news-information/press-releases/mar-25-2021-united-states-announces-humanitarian-assistance-people-west-bank-gaza ]

“Sustaining quality services is becoming an impossible mission,” declared UNRWA Commissioner Philippe Lazzarini in a statement to the UN General Assembly this month.

“For the first time in decades, four out of the five areas where UNRWA operates are simultaneously in crisis: Gaza, the West Bank, including East Jerusalem, Lebanon and Syria,” Lazzarini added.

Lazzarini the cuts will force UNRWA to stop programs or take outside loans.

“I have reached out to the CERF loan facility as a last resort with my assurances for timely repayment. We have deferred non-critical vendor payments, at the risk of hurting the Agency’s reputation as a trustworthy client,” he said. [ https://www.unrwa.org/newsroom/official-statements/statement-unrwa-commissioner-general-mr-philippe-lazzarini ] 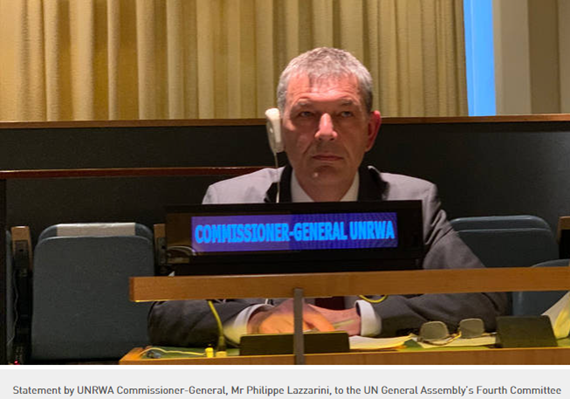 The deep cuts in US aid come amid a deep and dramatic economic and political domestic crisis for Mahmoud Abbas’s Palestinian Authority (PA), according to sources within Abbas’s own Fatah movement, who are noticeably angry at the Biden Administration.

“The US administration procrastinates and lies in its promises to the Palestinian leadership,” declared Hussein al-Sheikh, advisor to the 86-year-old Abbas who seems increasingly isolated from and irrelevant to his own people.

“The meeting of the Executive Committee of the Palestine Liberation Organization, last Monday evening, reflected the depth of the crisis that the Palestinian leadership is going through internally,” Radio Fatah added. [ https://www.fateh-voice.net/post/144920]
Outside observers note that Public opinion polls show an unprecedented dislike, almost loathing, for the leadership of the aged Abbas (also known by his nickname Abu Mazen), who has constantly evaded new elections since he was first chosen to replace PLO chief Yasser Arafat 20 years ago.

The “People Party” and “The Democratic Front for Liberation of Palestine” have been criticizing Abbas for using his security forces to brutalize opponents and protesters, including the killing of Nizar Banat in June. They also accuse him and his aides of corruption and of siphoning money away from other factions, and the two parties—and other factions—do not hide their lack of faith in Abbas keeping agreements.

Leaders of the two parties are also trying to force Abbas to cut more ties with Israel—a position similar to that of the HAMAS movement, an Islamist terror organization which controls Gaza and has been making inroads in the West Bank area known to Jews as Judea and Samaria.

Israeli officers in IDF Intelligence have long believed that Abbas, the PA and the Fatah movement cannot withstand the pressure from HAMAS and other groups without Israeli support, but at the same time Abbas has been attacking Israel relentlessly in international forums such as the UN and the , the World Bank and the World Court, even as he continues monetary payments to families of terrorists who attacked Israel.