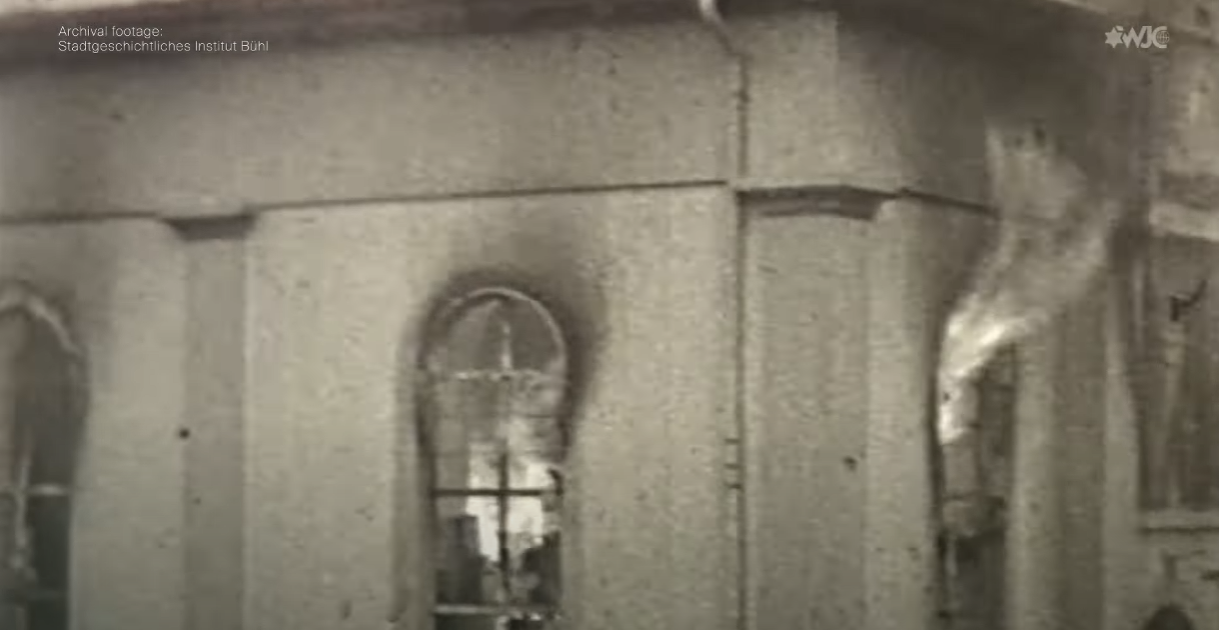 One would have imagined that the night of 9 November 1938 in Germany would have shattered forever any lingering illusions that one could appease Jew-hate by negotiations and reason.

It was on Kristallnacht that any lingering doubts as to the fate of Europe’s Jewish communities were banished from the minds of all except those who did not want to acknowledge reality. I wonder to this day what thoughts my paternal grandfather had as he was rounded up in the aftermath of the night of vandalism, arson and murder and transported to Dachau. Being a veteran of the First World War he must have finally realized that fighting for the Fatherland had been an exercise in patriotic futility.

By then of course it was all too late.

At that late stage as the finishing touches to the Final Solution were being finalized there was some faint hope that the democracies would somehow come to the rescue. The 1936 Olympic Games had been held in Berlin with nary a peep of protest by organizers or competitors alike over the disgusting anti-Jewish laws and pogroms which since 1933 had been introduced. The Vatican had concluded a concordat with Hitler whereby the Catholic Church, its Churches and followers were guaranteed protection. Needless to say, neither the Pope nor his diplomats lost any sleep over the plight of German Jews. Book burnings, boycotts of Jewish businesses, expulsion of Jewish faculty and students from universities and schools, dismissals of Jewish doctors, dentists and lawyers plus a myriad of other discriminatory policies were in full swing.

If German and other threatened European Jews thought that moral outrage and diplomatic sanctions would save them they were to be brutally disappointed. Most potential havens for fleeing refugees slammed shut their doors and in one of the most cynical acts of betrayal, the UK Government refused to allow entry to mandated Palestine, the intended home of a resurrected Jewish nation as promised by the Balfour Declaration and the San Remo Agreement.

We now know all too well what followed and how Jews were abandoned to a doomed fate facilitated by moral cowardice, prejudice and duplicitous political agendas.

Who would have ever imagined given the events of 9 November 1938 and the subsequent Shoah, that in the year 2021 we would once again be facing the spectre of the same manifestations, in some cases mutated into a multiplicity of virulent versions?

Following shattered illusions in 1938 why is it that there are still far too many who suffer delusional mirages today and who refuse to learn the painful lessons that amnesia and false political correctness induce?

Take a look at the current scene and then decide whether we should shrug our shoulders in futility or instead resolve to ensure that what happened a mere eighty-three years ago is never ever again repeated.

It was reported already three years ago that “hundreds of thousands of Jews in Paris, Brussels, London, Amsterdam, Berlin and other European cities have been concealing Jewish symbols such as kippot and Magen Davids in public. Since then the situation has worsened with increasing physical attacks on Jews either wearing identifiable clothing or jewellery or in other cases speaking Hebrew. It is not just on the blighted continent of Europe that this resurgence of hate has reappeared but this phenomenon has now spread to the United States.

In another survey, this time of Jewish American University students an even more shocking revelation surfaced.

There is every reason to believe that the same sorry situation can be found in the United Kingdom where the media, political groups and anti-Israel agitation has spread like a rash throughout sectors of society.

Not only are Shoah deniers and revisionists becoming more blatantly open in disseminating their poisonous lies they are also joined these days by haters on the left as well as the right of the political spectrum.

Another disturbing trend is the diluting of the Shoah by groups and individuals who hijack it in order to equate what happened to six million Jews and others with causes such as climate change and covid vaccination mandates.

The latest example of how this works is appropriately enough taking place in Germany. The November 9th anniversary of Kristallnacht is this week being commemorated by the President of Germany and invited guests in a manner that can only be described as disgraceful. The gathering will be combined with two other events which took place on this date. One is the establishment of the German Republic in 1918 and the second is the fall of the Berlin Wall in 1989. This means that the message being sent to Germans and the rest of the world is one of how to trivialize and submerge the crimes of the Third Reich. After all, if the establishment of the Weimar Republic and the reunification of Germany can be lumped together with the rampaging mobs of ordinary Germans who looted, destroyed and murdered Jews then guess which event will stick in the minds of citizens.

Without a doubt, the allotted quantities of diplomatic doublespeak and crocodile tears will be uttered and shed. Will Jewish leaders attend and go along with this farce or will they speak out and have nothing to do with it?

Back in the days of broken glass, the Vatican was not only guilty by its association with and accommodation of National Socialism but it also remained conspicuously inert as the pandemic of Jew-hate spread.

When one surveys and looks at the Vatican’s present-day attitudes towards the Jewish State one has to wonder if despite all the mea culpa breast-beating anything has really fundamentally changed.

It was only on 30 December 1993 that the Vatican actually recognized the existence of Israel. In other words, it took forty-five years and lots of theological somersaults for the Pope and his Church to acknowledge that Jewish sovereignty had been restored. It took that long for the word “Israel” to become kosher. Prior to that date, Vatican officials preferred the term “holy land.”

One thing that has still not changed however is the non-recognition of Israel’s capital. It has always been a cardinal matter of faith that Jerusalem should be internationalized which means in effect that the City of David should be handed over to some UN-appointed body. In plain, simple language, neither Israel nor the Jewish People should be allowed to exercise sole sovereignty in a place that predates either Christianity or Islam.

The fact that Jerusalem was reunited in 1967 and that freedom of worship is guaranteed for all faiths is irrelevant as far as the Vatican is concerned because the Jews are still in control. This was recently made crystal clear after President for life Abbas met the Pope in Rome. The following statement was made at the end of this meeting between the Holocaust revisionist leader of the terror-supporting PA/Fatah and the head of the Catholic Church:

“Jerusalem must be recognized by all as a place of encounter and not of conflict. Its status must preserve its identity and universal value as a Holy City for all three Abrahamic religions – also through a special INTERNATIONALLY guaranteed status.”

Where was the Vatican between 1948 and 1967 when the Jordanians, who love to portray themselves as guardians of religious freedom, ethnically cleansed the old city, destroyed synagogues, desecrated the Mount of Olives cemetery and banned Jews from worshipping at the Western Wall? Just as in 1938 they were conspicuously silent. Likewise in 2013 when Abbas claimed that Jesus was a Palestinian there was a deafening silence in Rome.

Anyone who believes that after the night of broken glass there could never again be delegitimization of Jews and the Jewish State is living in a delusional universe.

This year again, Synagogues worldwide left lights burning on the night of 9 November to remember the pogroms which occurred. As a symbol, like yahrzeit candles, this is a very appropriate gesture.

Unfortunately, it will take more than memorial lights to combat the illusions that the lessons of the past have been learned.