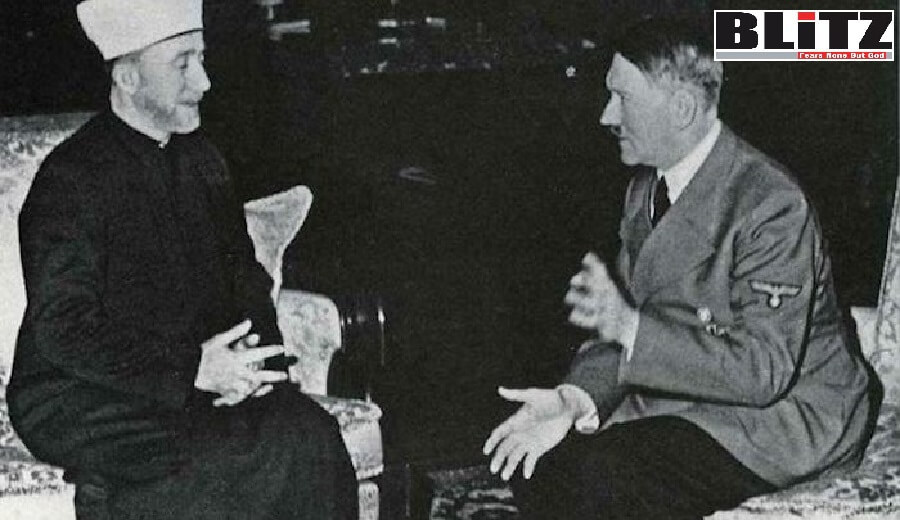 When Yad Vashem exhibits were redone, a telling photo of Adolf Hitler with Mufti of Jerusalem, Haj Amin al Husseini was not returned to the prominent position it had had before. Writes Shalom Pollack

I would like to introduce a notorious Nazi SS general, a leading Muslim cleric and the father of a nation – all in one.

Husseini was the powerful patriarch of the leading Arab clan in Palestine in the first half of the twentieth century. He used his political power and religious influence for his life’s motif – the murder of Jews.

In an attempt to “mainstream” the Mufti of Jerusalem ” the British appointed him to an official position of power and responsibility. It did not work. It only gave him the platform and prestige to pursue his passion of killing Jews.

This he accomplished on numerous occasions, most notably by instigating the barbaric Hebron massacre of dozens of Jewish families in 1929. (Note: in 1929, there was no Zionist “apartheid occupation”, no “occupied territories” nor “settlers”; just Jews of all ages living in Hebron and horribly killed by their neighbors)

A Nazi sympathizer, he fled British controlled Palestine during the war. He led a Nazi coup in Iraq where he instigated the bloody “Farhud” pogrom against the Jewish community of Iraq.

He then fled to Germany where he was made an honorary SS general by Himmler and proceeded to do all he could in helping the Hitler regime kill Jews. He addressed the Arab world by radio from Berlin winning huge support for the Nazis. He raised divisions of Muslim that fought in the Nazi army. One of their tasks was to guard so that Jews do not escape the trains to death camps.

Husseini intervened in a deal that would have saved a train load of Jewish children for a bribe. Husseini would not allow one Jewish child to escape the gas chambers.

Together with Himmler he visited the death camps and drew plans to build a “facility” in the Dotan valley in Samaria where the half million Jews of Palestine would be gassed as soon as Rommel defeated the British.

Eichmann was quoted as saying: “I am a personal friend of the Grand Mufti. We have promised that no European Jew would enter Palestine any more.”

After the war, SS general Husseini found refuge in Syria from war crimes judgment. Wherever he appeared in the Arab world he was received as a hero and mentor. His Nazi credentials together with his clerical position were the calling card that opened every door in the Arab world.

Yad Vashem, the world’s foremost Holocaust Museum and memorial had a large photo of Husseini with Hitler on one wall. Opposite was a photo of Jewish soldiers from Palestine volunteering in the British army in the “Jewish Brigade” The contrast was clear.

I say had, because when Yad Vashem was refurbished and expanded in 2005, the Hitler – Husseini photo did not make it into the new museum.

As a tour guide since 1980, I have visited the old museum numerous times and remember clearly how my tourists were shocked by the duo in the photo.

In the new museum, instead of the Husseini – Hitler photo there is a far smaller one of Husseini and Himmler, in a dark corner that no one sees. I finally located it.

When I wrote to Yad Vashem and asked why they removed the photo from the new museum, I was told that the new museum “concentrates on the victims and less on the perpetrators”. However just a few feet from the small Husseini – Himmler photo is an entire wall of perpetrators – the architects of the “Wannsee Conference” that drew up the plans for the Holocaust.

I asked a number of local official Yad Vashem guides about the photo. They either did not know of it or said it was political and they did not discuss it with visitors. They were uncomfortable with my inquiry.

I wondered if associating Palestinian Arabs with Nazis was no longer politically correct since the Oslo accords with Arafat in 1993.

All this happened a few years ago. I felt then like I was fighting windmills by myself and so I put my efforts on pause.

Today there is a new chairman of Yad Vashem,

Mr. Dani Dayan came to the position with “right wing ” credentials, so I renewed my efforts. I wrote to him asking that he return the photo and asked for a meeting with him about the subject. I was refused a meeting and told that there will be no changes made.

I then encouraged people to write to Yad Vashem and request that the photo be returned. The letter writers were made to understand that there never was such a photo. Emails began bouncing back to the senders. I enquired with Yad Vashem and was told that they changed the email address. I was told the new one and the letter campaign resumed.

In mid-November 2021, Mr. Dayan addressed a well-known and affluent synagogue in Westhampton, NY. My brother, a member of the community, approached Mr. Dayan and told him of my concern. He said he was aware of it and assured him It is not political. My brother asked if he would meet me. He agreed and so I received a call from his office for a meeting.

At the meeting Dayan told me he did not meet with me earlier because he did not like the tone of the letters written to him. He told me that “no one will lecture him on Zionism and love of Israel. His credentials speak for themselves.” That is true, which is why I had expectations.

He claimed that I was interested not in historical record but the politics of the Jewish – Arab conflict. I said it was both, which he did not accept. He added that Yad Vashem is not a museum of the Arab – Jewish conflict, that Husseini played only a tiny part in the Holocaust and did not warrant more space than he has in the museum.

He told me that he is in charge and won’t bring the photo back, if there ever was one. His advisor chimed in: “There was never such a photo.” She asked me if I had photographic proof and I reminded her that it is forbidden to bring cameras into the museum. I asked her if the many signed testimonies of veteran guides that I have gathered is proof enough and she said it was a possibility.

Mr. Dayan was frustrated that I continued to hold firm to my position. I told him that there are growing numbers of people, Jews and non-Jews, who want the truth not be hidden at Yad Vashem and the photo returned. He asked that I leave his office.

I intend to continue my efforts to bring the full truth back to Yad Vashem. Political correctness will not stop me. “Jews, Israelis and Arabs” is my new book that sheds light on the current state of affairs in Israel and at places like “Yad Vashem”

Shalom Pollack is a veteran tour guide, who says: “I have the opportunity to observe many sides of our beloved country. As a Jew who has come home, I am passionate about sharing my observations and thoughts”.

This article is republished from the Arutz Sheva