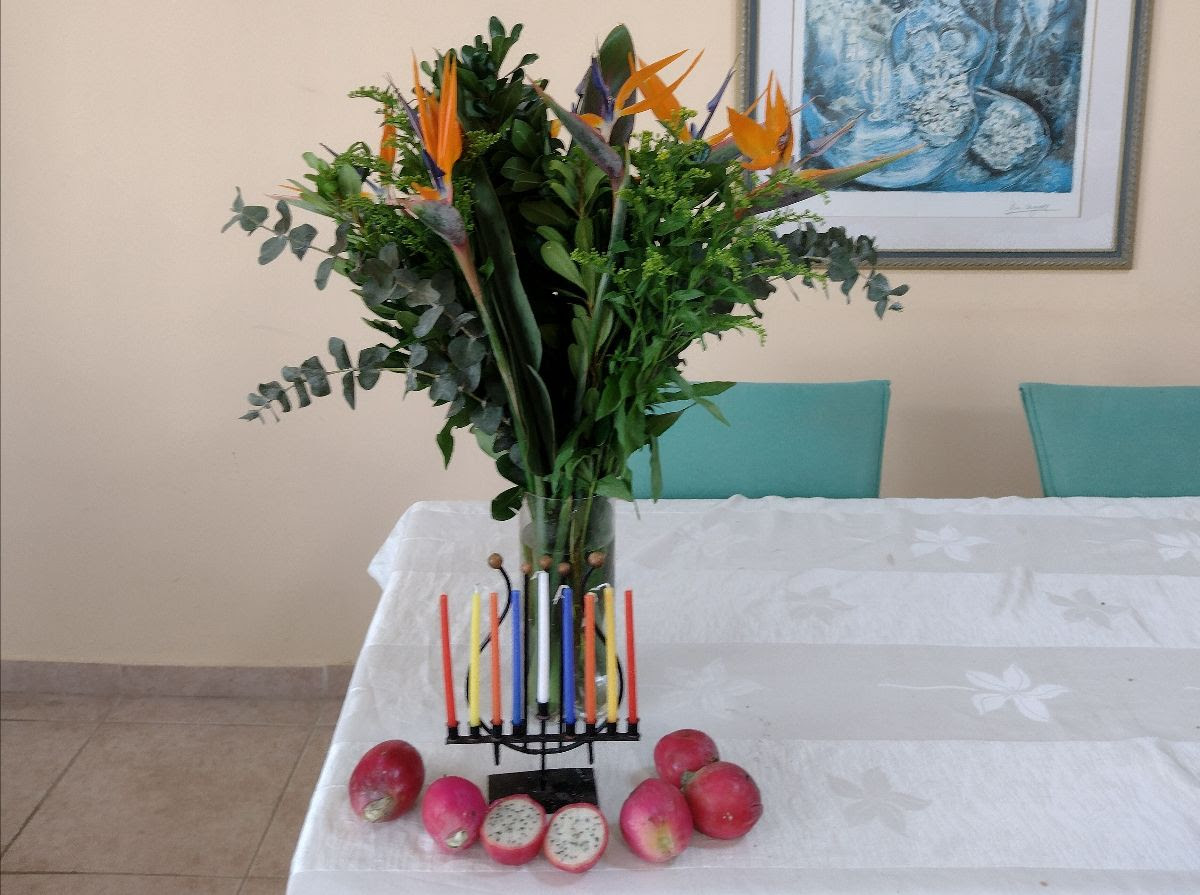 Due to a family event and Chanukah celebrations, my next newsletter will be in two weeks time – hopefully on Sunday 12th Dec.

The pace of Israel’s achievements is speeding up every week. There are many double events to celebrate in this week’s positive Israel newsletter. Just see the highlights below.The floral photo is to celebrate both Chanukah and the family event. You may also spot Israel’s delicious Kobu fruit and part of a Marc Chagall painting.

Please recommend www.verygoodnewsisrael.blogspot.com and forward this email to friends, family and colleagues and especially to any individuals who you think need to know about the good work that Israel does.

Please click here, to donate a small or large amount to help me publicize VeryGoodNewsIsrael.

Wishing those who celebrate it a very Happy Chanukah.

The Jewish State in its true light.

In the 28th Nov 21 edition of Israel’s good news, the highlights include:

Silencing tumor communications. Researchers at Israel’s Technion Institute have developed a breakthrough cancer treatment by injecting analgesic nanoparticles into the bloodstream. These anaesthetize the nerves inside the tumors, shutting down communications between them, thus inhibiting tumor growth and spread.
https://www.jns.org/innovative-breast-cancer-treatment-uses-anesthesia-of-nervous-system-around-tumor/
https://www.technion.ac.il/en/2021/10/nervous-system-inhibit-breast-cancer/

Immunotherapy dose reduced by a million. The NanoGhost cancer treatment targeted delivery mechanism developed by scientists at Israel’s Technion Institute is truly revolutionary (see here previously).  It enables the dose of existing immunotherapies (e.g., TRAIL) to be reduced by a millionfold, to prevent toxic side effects.
https://www.timesofisrael.com/immunotherapy-drug-now-works-with-a-millionth-of-a-dose-thanks-to-israeli-tech/   https://onlinelibrary.wiley.com/doi/abs/10.1002/adfm.202105701

Insulin pump gets attention. Israel’s Triple Jump is developing a unique small insulin pump patch that is placed on the patient’s body. The patch has mobile connectivity capabilities and will be included in a future artificial pancreas system. The device has attracted interest from medical devices giant Medtronic.
https://www.calcalistech.com/ctech/articles/0,7340,L-3920375,00.html
https://finder.startupnationcentral.org/company_page/triple-jump

Diabetes cured – in mice. Researchers at Israel’s Technion Institute genetically modified muscle stem cells from diabetic mice to express high levels of GLUT4 molecules, which transport glucose in the body. When re-implanted into the mice, it reduced blood sugar levels by an average of 26% and lowered levels of fatty liver.
https://www.timesofisrael.com/diabetes-reversed-in-mice-for-4-months-after-one-time-implant-from-israeli-lab/
https://www.jns.org/technion-biomed-engineers-assess-novel-approach-to-treating-type-2-diabetes/

Hospital to launch neurology startups. Tel Aviv’s Sourasky (Ichilov) Medical Center and Ra’anana’s Sanara Ventures are partnering to turn ideas and projects developed in the neurology department into groundbreaking projects in the fields of digital health and neurology. These include brain diseases, strokes and sleep disorders.
https://www.calcalistech.com/ctech/articles/0,7340,L-3919539,00.html

Networking for patients. Israel’s Alike.Health connects patients with a similar medical condition at various stages of treatment or illness, allowing them to learn from each other about ways to cope. The startup has just been selected to join the “Google for Startups Accelerator”, Google’s 3-month mentoring program.
https://www.calcalistech.com/ctech/articles/0,7340,L-3921201,00.html  https://www.alike.health/

It’s never too late. A 102-year-old woman has become the first Israeli to undergo cryoablation (freezing) treatment for breast cancer developed by Israel’s IceCure (see here previously). The usual surgical solution was not an option for her, as a previous heart catheterization meant that an operation was too risky.
https://worldisraelnews.com/102-year-old-israeli-first-to-try-locally-developed-breast-cancer-treatment/

ISRAEL IS INCLUSIVE AND GLOBAL

Israeli woman is top innovator. World Biz Magazine has chosen Israel’s Hamutal Yitzhak, CEO of Else Nutrition (see here previously) as No. 1 (of 40,000+ entries) on their list of “Top 100 Innovation CEO” awards for 2021. Shahar Fogel, CEO of Israel’s Rookout (see here previously), was also included in the top 100.
https://worldisraelnews.com/israeli-woman-tops-list-of-top-100-innovation-ceos/

Israel’s top female General. Brigadier General Orly Markman has been named as head of the IDF’s court of appeals. She will be promoted to Major General, becoming only the third Israeli woman to ever receive the rank.  Israel’s first female Major General, Orna Barbivai, is now Israel’s Minister of the Economy.
https://www.timesofisrael.com/orly-markman-named-as-head-of-idf-court-of-appeals-israels-3rd-ever-female-general/

IDF Chief praises Specials. IDF Chief of Staff Aviv Kochavi gave an inspiring speech at Special in Uniform’s annual benefit for IDF soldiers with disabilities. He stated, “You are blessed in the IDF, you are essential to the IDF, and you are wanted by the IDF!”. Some 750 young “specials” perform important work at 60 IDF bases.
https://www.israelnationalnews.com/News/News.aspx/315689

Outstanding entrepreneurs. The Global Consortium of Entrepreneurship Centers recently awarded the title of “Outstanding Emerging Entrepreneurship Center” to the Innovation Centers of the Hebrew University of Jerusalem and Ben-Gurion University of the Negev – the first ever such award for institutions outside of the US.
https://jewishbusinessnews.com/2021/10/25/israel-won-worlds-most-prestigious-awards-for-academic-innovation/   https://www.cfhu.org/news/asper-huji-innovate-wins-prestigious-international-prize/

Electricity for water deal with Jordan. The UAE has brokered a “water for solar energy” exchange deal between Israel and Jordan. Jordan will export 600 megawatt of electricity to Israel from a UAE-built solar farm. Israel will export up to 200 million cubic meters of desalinated water to Jordan. The deal was signed in Dubai.
https://en.globes.co.il/en/article-israel-and-jordan-sign-water-for-energy-deal-1001391793
https://www.timesofisrael.com/israel-jordan-sign-uae-brokered-deal-to-swap-solar-energy-and-water/

Israeli flag raised at UAE presidential palace. (TY David O) In a historic ceremony, the Israeli flag was hoisted and the Israeli national anthem Hatikva was played for the first time at the Qasr Al Watan Presidential Palace in Abu Dhabi. It marked the inauguration of Amir Hayek – the Israeli Ambassador to the UAE.
https://www.israelnationalnews.com/News/News.aspx/317057
https://www.youtube.com/watch?v=pcJQ9DptVkc

Aiming for the Moon, with the UAE. The United Arab Emirates signaled its interest in joint space missions with Israel back in Dec 2020 (see here). This has now been formalized in an agreement to work together on a number of space projects, including a joint launch of the “Beresheet 2” space mission to the moon.
https://www.timesofisrael.com/israel-uae-to-launch-joint-space-projects-including-beresheet-2-moon-mission/
https://www.jns.org/israel-and-uae-signed-agreement-to-partner-on-mission-to-the-moon-in-2024/

Cyber training for religious graduates. The Jerusalem College of Technology (JCT) has launched Cyber Elite 2.0, a program that provides cybersecurity training for orthodox and ultra-orthodox computer graduates. It aims to supply Israel’s high-tech and defense industries with newly skilled employees to meet its talent shortage.
https://www.calcalistech.com/ctech/articles/0,7340,L-3921220,00.html

Protection against ransomware attacks. Israel’s Cymptom protects businesses and lifesaving networks at hospitals, against cyber threats. Its software monitors, prioritizes the risks and recommends how to address them in real time. Cymptom was named Cybersecurity Best Product at the 2021 Global InfoSec Awards.
https://www.timesofisrael.com/spotlight/securing-hospitals-and-other-vital-systems-against-the-next-ransomware-attack/  https://www.israelhayom.com/2021/05/18/israels-cymptom-named-cybersecurity-best-product-at-global-infosec-awards/

See through walls from afar. Israel’s Camero-Tech has developed technology that can “see through walls” at long-range. The Xaver™ LR40 (XLR40) portable system can detect, in real time, live objects hidden behind