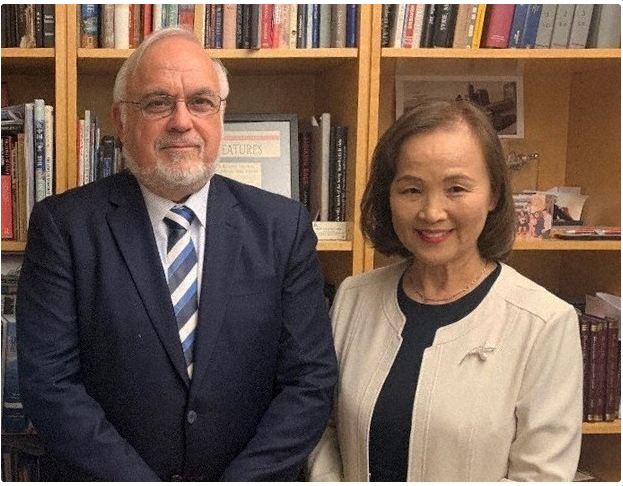 Next year, Japan and Israel will reach a major milestone: 70 years since relations were established between these two unique democracies. In that time, both countries have made immense strides from uncertain times following World War II. Today, in the 21st century, they are both among the most technologically advanced democracies.

Recently, some have suggested that Japan and Israel could even form a powerful new alliance with the U.S. While this is a wonderful vision that deserves to be pursued by both countries, it is imperative that Japan first address its policy towards Israel that has deeply disappointed those who would support closer ties.

A few months ago, we published an op-ed in this paper calling for Japan’s boycott of the 20th Anniversary of the anti-Israel Durban Conference (United Nations World Conference Against Racism.) Disappointingly, Japan went on to attend this anniversary event of the hate-filled antisemitic conference, rather than joining 37 major countries, including all other G-7 members, that boycotted it.

Then, on Dec. 1, we were shocked to learn that Japan voted in favor of a resolution at the U. N. General Assembly that referred to the site of King Solomon’s ancient Holy Temple (Temple Mount) exclusively by its Islamic name. The United States and other democracies denounced the move and refused to endorse such a resolution which erodes trust that the U.N. will ever have a positive role to play in resolving the Israel-Palestine conflict. Further, many Israelis were incredulous that Japan, a proud ancient people and culture that zealously reveres and protects its past, would so callously deny the Jewish people the right to protect and celebrate its 3,500-year history.

Japan’s silence on the problem of the United Nations Relief and Works Agency for Palestine Refugees in the Near East (UNRWA) is another concern. Many other groups, including other donor countries, have raised their voices criticizing UNRWA’s corruption and hate education.

And then, there are the recurring incidents in Japan’s political and social arenas that reveal shocking ignorance, most notably dabbling with incorrect references about Nazis and Nazi symbols and even flirting with latter day fascists and Nazis. Such troubling incidents even threatened to mar the opening of Tokyo’s 2020 Olympic Games and stained the reputation of several Japanese politicians.

But the good news is that Japanese and Israeli business joint ventures are at an all-time high. Israel is no longer a distant, unfamiliar place to Japan but a true partner in the economic sphere. With shared democratic values and tech-driven economies, there’s much to be gained by forming a strong alliance between the two countries, or even one including the U.S.

However, if Japan sincerely wants to form such an alliance, the Japanese government must show that Japan indeed shares the same values as Israel and the U.S. Otherwise, it appears Japan only wants to gain an economic advantage, while politically it continues to act in ways that directly threaten Israel’s very existence.

Alliances are built on trust. Israel cannot trust Japan if it maintains ongoing ties with Ayatollah Khamenei’s regime in Iran, a regime that has publicly sworn to wipe out the Jewish state.

To begin forging a true alliance, Japan can take the following proactive steps to reverse the repeated positions they’ve taken against Israel.

First, Japan must reverse its long-held and outdated stance at the U.N. It is no secret that U.N. agencies, especially the Human Rights Council (UNHRC), serially attack the Jewish state. Such reckless behavior bordering on overt antisemitism would change if influential countries like Japan would align with other democracies and vote”no.”

Second, it should leverage its unique position as a major donor to UNRWA by calling for significant reform and transparency in all areas ranging from its financial malfeasance to blatant anti-peace curriculum foisted on Palestinian children.

Third, it is past due for the Japanese government to adopt the International Holocaust Remembrance Alliance (IHRA)’s definition of antisemitism and follow its illustrative examples as guidance.

As the world witnesses a staggering increase of antisemitic incidents, the IHRA definition has been adopted by major democratic countries, including South Korea, which was the first Asian country to do so last August.

These steps will create the proper foundation for a strong alliance between the two countries.

Finally, the two governments can work closely to deepen and expand the Abraham Accords across the Arab/Muslim world and beyond. Such efforts will also advance Japan’s foremost diplomatic policy of a “Free and Open Indo-Pacific,” given the traditionally close relations between Israel and Australia and the recently flourishing one between Israel and India. They both refused to support the U.N. resolution that denied Jewish ties to the Temple Mount.

We know there is one Japanese hero, the late Chiune Sugihara, who would be smiling down from heaven if the 70th anniversary would spur a new level of cooperation between our peoples. He helped Jews at the time of their most dire of need during the Holocaust. He refused to stay on the sidelines, and saved thousands of Jews from certain death.

By following the roadmap above, Japan has the opportunity to build a new and dynamic alliance between Japan, Israel, and the U.S. In so doing, Japan not only aligns with many other democracies, but it also furthers its own political and business goals while partnering with Israel, an old/new nation that shares similar values. Establishing a new alliance among these influential democracies can mark a promising new era for these countries and the world.

Rabbi Abraham Cooper is the Associate Dean and Director of Global Social Action for the Simon Wiesenthal Center.

Kinue Tokudome is a Japanese author and translator who recently translated, “Dreams Never Dreamed,” a memoir of Rabbi Kalman Samuels, the founder of Shalva, a care facility for children with disabilities in Jerusalem.