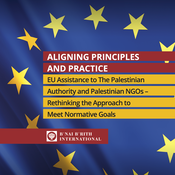 (Washington, D.C., Dec. 21, 2021)–B’nai B’rith International has just published an essential report, pulling back the curtain on European Union (EU) assistance to the Palestinian Authority and other beneficiaries.

The report, titled “Aligning Principles and Practice: EU Assistance to the Palestinian Authority and Palestinian NGOs, Rethinking the Approach to Meet Normative Goals,” is a unique, comprehensive guide to European Union funding to the Palestinian Authority (PA), the United Nations Relief and Works Agency (UNRWA) and Palestinian NGOs. It provides a deep look into serious inconsistencies in the EU’s implementation of its stated values in relation to Palestinian actors—including the unconditional nature of most funding—and offers recommendations to improve oversight and accountability.

In his opening remarks on Dec. 21 at the webinar launching the report, Member of European Parliament David Lega (European People’s Party) noted, “We in the European Union must do better: We should impose clear conditions on EU funding. Thanks in large part to EU assistance, Palestinians are the largest recipients of per capita support in the world. European citizens should know that their money is used to promote peace and EU values.”

He highlighted the persistent issues of payments to families of convicted criminals by the Palestinian Authority as well as anti-Semitic and inciteful content in Palestinian textbooks: “[The EU] has, in the process, aided and abetted persistent human rights abuses by the Palestinian Authority and has turned a blind eye to unconscionable practices such as the payments to families of convicted terrorists, considered martyrs for the killing of Israeli civilians. The European Union has for the longest time also failed to hold both UNRWA and the Palestinian Ministry of Education accountable for gross anti-Semitism and incitement to violence against Jews and Israelis in Palestinian textbooks.”

In turn, MEP Dietmar Köster (Progressive Alliance of Socialists and Democrats), noted, “One of the construction sites that we all have in our eyes very vividly is the trouble regarding the anti-Semitism in Palestinian textbooks sponsored by UNRWA. This showed once again how important it is to examine exactly whether civil organizations are used under the guise of humanitarian aid to carry out anti-Israel attitudes and actions. This fundamental issue goes far beyond educational propaganda. According to the Israeli Ministry of Foreign Affairs, the PFLP for instance finances terrorist acts through these channels. The party tries to acquire donations from abroad with the help of a network of civil organizations. These personnel and organizational links have been discussed in Israel for a long time. The EU supports Palestinian NGOs financially. Thus, such cash flows urgently need to be checked through the EU Anti-Fraud Office.”

He later added, “As part of the European Neighbourhood Policy, the EU must therefore use its leverage with the PA for the better and advocate reforms, so that the above-mentioned adjusting screws can really be turned. This is crucial for Israel’s security and stability in the region. The PA must be held accountable wherever it exerts its jurisdiction, and the EU in turn must take a firm stand when it comes to cases of non-compliance.”

The report findings reveal that the EU has neither pushed the Palestinian Authority to significant reforms nor held it accountable for its human rights violations. The European Union has not substantively addressed the infamously persistent issue of so-called “pay-for-slay” payments—financing to the families of convicted terrorists by the PA. At the same time, the implementation of the anti-terrorism clause for NGOs has been opaque. Building on research commissioned by the European Union itself, the report addresses persistent anti-Semitism in Palestinian textbooks utilized in UNRWA schools.

Mariaschin stressed, in conversation with Wilf, the need for the EU and individual member states to demand accountability in their dealings with the PA, UNRWA and civil society.

He noted, “[The Abraham Accords] have managed in just over one year to breathe new life and hope into the region, to bring a sense of opportunity and to present a whole new universe of partnerships and exchanges. This momentous paradigm shift is a unique opportunity for the European Union to join this positive momentum.”

“The EU is the biggest donor to the Palestinian Authority and to Palestinian civil society, as well as the second biggest donor to UNRWA. Given this reality, the EU has an essential role to play in the promotion of peace, but in accordance with its own values and stated goals and to date that has not been regrettably the case.”

B’nai B’rith looks forward to engaging with policymakers and other EU officials in the new year to remedy the challenges identified in the report.

The report was initiated and overseen by Schneider and Bricman and can be found here: https://www.bnaibrith.org/uploads/1/1/6/9/116999275/bnai_brith_report_eu_assistance_to_the_pa_and_palestinian_ngos.pdf

​B’nai B’rith International has advocated for global Jewry and championed the cause of human rights since 1843. B’nai B’rith is recognized as a vital voice in promoting Jewish unity and continuity, a staunch defender of the State of Israel, a tireless advocate on behalf of senior citizens and a leader in disaster relief. With a presence around the world, we are the Global Voice of the Jewish Community. Visit bnaibrith.org.