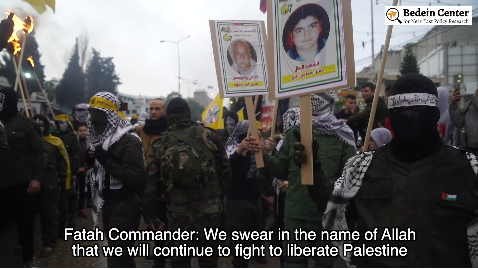 The Jerusalem-based Bedein Centre has written to the Head of the Australian Representative Office to the Palestinian Authority on a Fatah commemoration held in the UNRWA-funded Deheishe refugee camp.

In her letter, Julia Marks pointed out to Mark Bailey that “The Bedein Centre for Near East Policy Research has held six meetings with the office of UN Secretary General Antonio Guterres concerning the fate of these 5.3 million Palestinian refugee descendants.

At each meeting, the staff of the UN Secretary General made it clear that the donor nations to UNRWA are to be held responsible for any indiscretions which occur in UNRWA.

Since Australia remains one of the lead donors to UNRWA, our research centre is sure that you are most concerned about the current situation of the UNRWA refugee camps.”

In her letter Marks contained a link to this film the Centre took of an armed procession.

She asked: “The question which we pose to you as a leading funder of UNRWA, is whether your country will take action to ask UNRWA to disarm Deheishe in order to save lives of men, women and children who live in the cramped conditions of a refugee camp.”