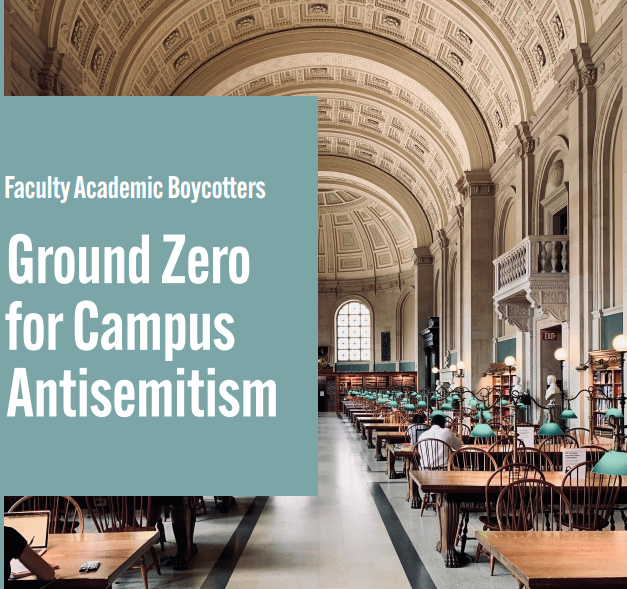 A new study released today by AMCHA Initiative, Faculty Academic Boycotters: Ground Zero for Campus Antisemitism, examined the unique contribution of faculty who support an academic boycott of Israel to the explosion of antisemitic activity on U.S. campuses from the onset of the Israel-Hamas War in May 2021 through the end of the school year. During this period, the incidence of campus antisemitism (455 incidents) was eight times higher than during the same 7-week period in 2020 (57 incidents), and fourteen times higher than in 2019 (32 incidents).

Much of the antisemitic activity was perpetrated by anti-Zionist students and student groups and included the harassment of Jewish and pro-Israel students, the promotion of BDS, and the use of anti-Zionist expression that demonized and delegitimized Israel or promoted its elimination as a Jewish state. However, individual faculty and academic departments also dramatically increased their anti-Zionist rhetoric and activism in the weeks following the onset of the Israel-Hamas war.

During this period, thousands of individual faculty members signed onto anti-Zionist statements that included calls for an academic boycott of Israel. Even more troubling were the wholly unprecedented anti-Zionist statements issued or endorsed by 160 academic departments at more than 120 U.S. colleges and universities, that contained rhetoric consistent with the International Holocaust Remembrance Alliance (IHRA) definition of antisemitism, and, in the majority of cases, expressed support for BDS.

AMCHA’s study found that the presence and number of faculty supporters of academic BDS contributed to every measure of campus antisemitic activity during this period. In particular,
schools with five or more faculty academic boycotters were:

These results confirm and expand on AMCHA’s previous studies, providing further compelling evidence that faculty boycotters are indeed exploiting their university positions and departmental affiliations in order to bring their extramural anti-Zionist advocacy and activism onto campus, in ways that increase both student anti-Zionist activity and acts that target Jewish and pro-Israel students for harm.

As the Middle East Studies Association (MESA), which represents 3,000 primary purveyors of Israel-related courses and departmentally-sponsored events, is poised to endorse the BDS movement and its call for implementation of the US Academic and Cultural Boycott of Israel (USACBI) guidelines, AMCHA’s latest findings about the significant contribution of faculty academic boycotters to campus antisemitism couldn’t be timelier. The study notes that what the MESA academics are about to endorse — USACBI’s rejection of the normalization of Israel in the academy — not only calls on its adherents to work towards boycotting educational programs in or about Israel and canceling or shutting down pro-Israel events and activities on campus, it also urges the censuring, denigration, protest and exclusion of pro-Israel individuals. These USACBI-encouraged actions are directly linked to behavior that harms Jewish and pro-Israel students and were the apparent motivation for the vast majority of incidents involving the harassment of Jewish and pro-Israel students that were considered in study.

AMCHA’s study emphasizes that in the absence of robust safeguards to prevent faculty from using their university positions and departmental affiliations to promote politically motivated advocacy and activism targeting Israel and its supporters, the problem will continue to grow at a rapid rate.

State and federal legislators responsible for ensuring that government monies given to institutions of higher education are used for educational purposes rather than political ones, such as the implementation of an academic boycott that intentionally subverts the educational process, are therefore urged to consider withholding funds from schools that permit faculty and departments to engage in such behavior.

The public, too, is urged to understand that unless and until colleges and universities establish safeguards against the politicization of educational spaces, their tax, tuition and donor dollars will continue to be used to promote an antisemitic academic boycott that incites enormous bigotry and threatens the safety and well-being of many students, and they are encouraged to act accordingly.