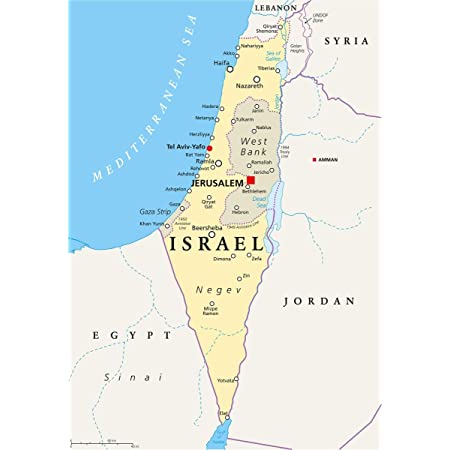 It may in the end have taken forty years to get here but the road map couldn’t have been clearer.

In the first recorded use of a GPS, the Hebrew slaves left Egypt guided by a cloud during the day and a pillar of fire during the night.

Their destination was not a secret and this in my opinion is the core meaning of Pesach. We should by all means remember the miracles which accompanied the exodus but too often these days many tend to sideline the real purpose of this epic journey.

From servitude and oppression to receiving a constitution at Mount Sinai and then onwards to the Promised Land – these are the historical events that each generation should be internalizing.

Back then there were lots of Hebrews who despite everything refused to join their brethren and preferred to remain in Egypt where according to them “the food was tasty and plentiful.” Why leave everything behind and set out on a journey to an unknown land via a hostile environment and with many challenges on the way? Better to stay even if the ruling authorities accused you of being subversive and life was one long grind every day of the week.

That was the thinking of those who stayed and of some who desired to turn back when the going got tough.

No doubt Moshe and Aaron had to deal with their fair share of critics who threw cold water on the very notion of travelling to a faraway country that had been promised to their founding Patriarchs and Matriarchs as an eternal inheritance.

I guess we could call them the first recorded group of anti-Zionists.

Amazingly we can witness the same sort of twisted reasoning today as enunciated by a host of groups all of whom echo more or less similar rhetoric and happily dish up dirt on our restored independence.

On the one hand, we have an assortment of extreme Charedi sects who deny the validity of our return to Israel. In their interpretation of reality, we are supposed to wait for the Messiah and as he has not yet arrived we are forbidden to reclaim sovereignty. This is a theological argument that I doubt Moshe and Aaron had to deal with. History has unfortunately taught us or should have taught us, that while the Messiah tarries, the Jew-haters of this world carry on with their work. Countless religious Jews were doomed to destruction precisely because they waited in vain for salvation during the Shoah years.

On the other hand, we have an assortment of individuals and groups which span the assimilation spectrum and see no reason to either identify or support a collective Jewish identity. In addition, there are also those, who like their predecessors at the time of the Exodus, feel that Jewish life can be adequately and safely practised even in countries where we are not that welcome. Within this group are many who fervently support the restored Jewish homeland and nurture an aim to perhaps join their brethren one day. Next year in Jerusalem remains a pious hope for some and a meaningless mumble for others.

A news item caught my attention the other day. Just in time for Passover, it has been reported that a Jewish Congregation in Chicago declared itself to be “anti Zionist” after a vote of congregants and its Board and with the Bracha (blessing) of its “rabbi.” This particular spiritual leader explained that “Judaism belongs in the Diaspora.” In fact, he went on to proclaim that “Israel has increased antisemitism and the country was created at the expense of another people.”

This deliberate falsification of history is mind-boggling and even more so when it comes from the mouth of a spiritual leader. Ignored, in a grotesque effort to justify an incredible decision, is the inconvenient fact that the Arabs of mandated Palestine were offered more than one opportunity to have their own country but rejected these offers in favour of trying to wipe out the Jewish inhabitants. Also ignored is the fact that there has never ever been an Arab sovereign presence in the territory concerned with Jerusalem as its Capital. In addition according to the San Remo Agreement endorsed by the League of Nations and subsequently confirmed by the UN (prior to 1947) all the territory from the Mediterranean to the Jordan River (and actually beyond) is legally designated for Jewish settlement and sovereignty.

Claiming that Judaism belongs in the Diaspora as a reason to hoist the anti-Zionist banner is inane especially when one realizes that most of the mitzvot revolve around the Land of Israel. However, I suppose that a “rabbi” and congregation who don’t accept them as a valid component of Judaism wouldn’t really care.

I can imagine these Chicago dropouts telling Joshua and King David that battling the Amalekites, Canaanites and Philistines were forbidden. After all, according to their present-day logic, defending Jews against those who plot to deny them their homeland is forbidden. Remaining at the mercy of Diaspora rulers must be far more preferable.

Moshe and Aaron confronted Pharaoh and gave him plenty of opportunities to change his mind about letting the Hebrews leave. It was only after a series of warnings that finally the last plague ensued and precipitated a hasty departure.

Contrast this with today’s pathetic performance in the face of the current Ramadan murderous mayhem.

When Abdullah of Jordan and our own assorted collection of leftist politicians all prostrated themselves at the feet of the President for life, Abbas, in the futile hope that he would prevent violence, they demonstrated a pathetic lack of understanding as to how terror supporters behave. After Abbas issued a patently transparent and insincere “denunciation” of the murder of Jews, he was showered with congratulations and lauded for his “honesty.”

Anyone with even the slightest hint of common sense should have known that the real agenda was being broadcast to the masses. The Supreme Shari’ah Judge and advisor to Abbas let the cat out of the bag (as disclosed by PMW): https://palwatch.org/page/31033

Instead of trying to placate and “buy off” the chief terror instigators and obtain worthless plaudits from the hypocritical international community, our befuddled leaders should have taken note of how Pharaoh was defeated. It’s not as though Abbas and the Palestinian Arabs haven’t been given umpteen chances.

The plagues of economic deprivation, refugee status, brutal oppressive and corrupt governance and a multitude of other self-inflicted afflictions will only get worse unless and until the promoters of terror are eliminated.

The best response that we can make this Pesach is to strengthen the Jewish presence in all parts of our restored homeland and to make “Next Year in Jerusalem” a practical reality.