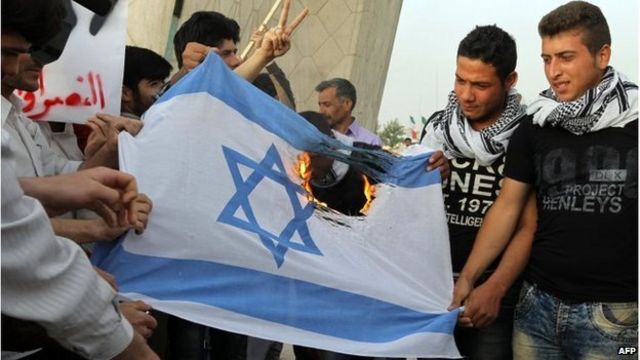 Yom Hashoah this year is being commemorated by Jewish communities worldwide amidst the biggest upsurge of hate and incitement since the liberation of the concentration camps in 1945.

Once the full horror of the Holocaust years had been revealed it was generally believed by most that this descent into barbaric Jew-hate would finally and for once and all time be banished from the world.

Anyone with a sense of Jewish history who had internalized the lessons of the Passover experience retained a lingering doubt as to whether the world’s oldest surviving virus could actually be vanquished. For a short time, it seemed as though the haters had been driven into the undergrowth but unfortunately like poisonous seeds they were merely awaiting an opportune time to germinate (pun intended) again and spread their venom far and wide.

It hasn’t taken that long and we can already witness the toxic harvest appearing once again. Viruses mutate and this particular strain is no exception. It nowadays manifests itself in a variety of ways and has widened its infectious grasp from individual Jews to entire communities and finally to the nation-State of the Jews.

In the process, it has bypassed most attempts at inoculating today’s generation against its fatal symptoms and is proving especially resistant to whatever boosters are administered.

The alarming and irrefutable reality is that ignorance of the Shoah years and especially how the ground for genocide was prepared years before is at record levels. Hand in hand with this abysmal deficit of knowledge is the swallowing of delegitimizing lies and incitement against Israel which results in the growing acceptance of conspiracy theories and slanders.

What once was confined to isolated clusters of extremist haters has now morphed, thanks to social media and other vehicles of disinformation, to a much wider circle of believers. What was once upon a time the exclusive preserve of the extreme right has these days spread to the left of the political spectrum thus ensuring that Judeophobia and Israel phobia meld into one large group.

If there is one important lesson that history teaches us it is that keeping a low profile and remaining passive in the face of physical and verbal onslaughts will never guarantee that the haters will disappear or turn their attention elsewhere. We should also by now have realized that political posturing and assurances of goodwill are only as useful as long as expediency prevails. Once those spouting expressions of support see which way the wind is blowing they will abandon previous stances and either join the mindless mob or look the other way.

You only have to survey the current scene to see how this plays out.

Issuing touchy-feely expressions of solidarity without implementing policies designed to squash Judeophobia and Israel bashing at the UN are perfect examples of what transpires these days. Thus, bemoaning expressions of incitement against Jews while refusing to implement compulsory Holocaust studies in high schools encourages increasing ignorance and slanders against Jews and a black hole as far as understanding what happened. Likewise, professing solidarity with Israel and then voting against it at every opportunity reinforces the notion that there is something inherently evil and sinful about the country.

In tandem with these hypocritical acts is reluctance in too many instances of Jewish communal leadership, lay and religious, to rock the boat and raise their heads above the parapet. There is a time for quiet diplomacy but there is also an urgent need to expose the double standards and outright lies when the occasions demand it.

Surveying the current world scene confirms that not only have anti-Israel and anti-Jewish outbursts reached a new post-war record but that the time for decisive action rather than rhetorical reticence is urgently required.

In the “goldene medina” where the majority of Jews are either oblivious to the rising tide of hate or frantically trying to assimilate, it has been revealed that the “land of the free” has now reached the dubious distinction of achieving second place ahead of the entire continent of Europe in the number of reported anti-Jewish incidents. It also recorded more physical and verbal violence which one would assume might alarm most Jews. The Conference of Presidents of Major Jewish American Organizations issued a warning that the level of Jew hate is worse than most realize. Whenever I have raised the subject with those who still reside in the USA the prevailing response is either one of denial as to its severity or a claim that it only is a fringe phenomenon.

This brings back echoes of pre-1933 Germany where the Nazi agenda was dismissed as a passing and minor aberration of the lunatic fringe.

The United Kingdom recorded 2,255 anti-Jewish incidents in 2021, the highest in Europe. It’s not just the fascist right-wing groups that are responsible (as in pre-war Britain) but hate now encompasses swathes of the left, academics, universities and other sectors of society. An added component, common to most of Europe and the USA, are the increasingly radicalized Islamic youth and fellow travellers, who having been saturated with incitement against Israel feel vindicated in taking it out on Jews and their institutions. Anyone who has the “gall” to point this out is immediately condemned by the politically correct establishment. Thus, once again, denial of the scope of the problem is swept under the carpet.

France, where radicalized groups have reached menacing proportions recorded a 75% increase in anti-Jewish violence during 2021. It is no wonder therefore that in the elections just concluded a party that originally espoused anti-Jewish intentions attracted over 40% of the electorate’s votes. The nation which produced Vichy and willingly handed its Jewish citizens over to the Germans for deportation via the French railways to Auschwitz is today slowly but surely heading in an ominous direction. Many French Jews are voting with their feet but just as in the past most will hallucinate that “it can’t happen again.”

Denmark, in a belated effort to tackle rising anti-Jewish incidents, is launching an action plan making Holocaust education compulsory in primary and lower secondary schools & general upper secondary schools. With a recent survey in New Zealand revealing an appalling ignorance about the Shoah one has to wonder at the refusal to introduce a similar programme. At some stage in the near future when this ignorance turns to overt acts of hate those who remained silent and politicians who preferred to take no action will all wonder why it happened. As usual it will be a matter of too little too late.

Australia is not immune to the rising Judeophobia with a 35% recorded increase. Once upon a time “down under” was relatively free from such northern hemisphere contagions but unfortunately this is no longer the case.

Meanwhile back in Germany, where unbelievably 118,000 Jews now swear allegiance to the “fatherland,” the country’s domestic intelligence agency reports that anti-Jewish offences are continuing to rise and that those which come to light are only “the tip of the iceberg.” The head of the agency further commented that hate against Jews is “sometimes embraced by people in the middle of German society.”

Doesn’t this all sound eerily familiar? Shouldn’t it be ringing loud alarm bells? Haven’t we been down this dead-end road previously?

The North Rhine-Westphalia regional Government is appointing 22 prosecutors to combat rising hate and incitement against Jews. Somehow or other this rather anemic response is supposed to induce a feeling of reassurance that the authorities are serious in their campaign to rid the country of this latest return of the ancient plague.

The above examples are only a smattering of what we face collectively as we prepare to honour the memory of our six million martyrs. It has only taken 77 years for the scourge to strengthen and return.

The time has arrived, in fact, it is long overdue, when we need to challenge those who intone “never again” and then proceed to do nothing or even worse, join in the Israel bashing fiestas.

Unlike in the past, those who are the targets of violent hate, now have an option to find sanctuary elsewhere. The perpetrators of incitement must be held to account and this includes terror-supporting misnamed “peace partners” so beloved by the international community.

It’s about time that Israeli leaders expose all those who masquerade as proponents of tolerance and at the same time stoking the fires of hate.

This Yom Hashoah we need to replace slogans with meaningful action.