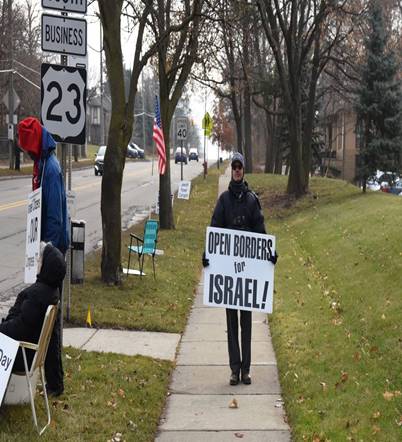 Members of the Jewish community in Ann Arbor appeared before City Council to say they’re tired of weekly anti-Israel protests happening outside the Beth Israel Congregation for over 18 years.

The decision came after over 45 minutes of deliberation, including disagreement over the resolution wording and split votes on attempts to revise it.

Citing legal advice from the city attorney’s office, some council members wanted to back off some of the strong wording, including phrases like “aggressive bigotry” and “fear of violence,” to reduce the city’s legal risk. But a majority of council decided the language accurately reflected the lived experiences of congregants.

Members of the Washtenaw Avenue synagogue addressed council, describing the Saturday morning demonstrations they’ve endured since 2003 as hateful and intimidating. Rabbi Nadav Caine lamented his congregation has had to hire security officers.

“I know that violence against Jews is not theoretical and it’s real,” he said. “There’s a tendency to try to reduce the widespread attacks on Jews to political issues. They are not. They come from the kind of hateful propaganda that Jews cannot be victims because we are secretly controlling things or somehow causing our own derision.”

“History makes plain that we must be continuously vigilant in the fight against oppression of any groups,” she said.

Anti-Israel activist Mozhgan Savabieasfahani, who is running for City Council, sat in the council chambers Tuesday night with a sign stating: “We are against military aid to Israel.” Between Jewish speakers, she repeatedly yelled out about Israeli military violence against Palestinians.

“Stop murdering Palestinian children! You are murdering them!” she said as Mayor Christopher Taylor banged his gavel to maintain order.

The resolution council approved states Jews have been increasingly targeted for violence across the United States and the growing problem of antisemitism was highlighted by a number of antisemitic slogans exhibited by insurrectionists who stormed the U.S. Capitol on Jan. 6, 2021.

“A small group has picketed the Beth Israel Congregation, an Ann Arbor synagogue, every Saturday for 18 years, erecting antisemitic signs along the Washtenaw Avenue right-of-way, including those that allege conspiracy and tarnish the Star of David, creating an atmosphere of hate,” it states.

Henry Herskovitz, founder of an anti-Israel protest group in Ann Arbor, and Donald Abdul Roberts, holding an anti-Israel flag, kick off another day of protesting outside the Beth Israel Congregation on Washtenaw Avenue on a Saturday morning in August 2013.Ryan Stanton | The Ann Arbor News

It goes on to say council “condemns all forms of antisemitism, and in particular the weekly antisemitic rally on Washtenaw Avenue; calls upon the persons who rally to express antisemitism on Washtenaw Avenue to renounce extremism, disband, and cease their weekly show of aggressive bigotry; and declares its support for the Beth Israel Congregation, their guests, and all members of the Jewish community in Ann Arbor, each of whom has the right to worship, gather, and celebrate free from intimidation, harassment, and fear of violence.”

The resolution was sponsored by the mayor and Council Members Erica Briggs, Jen Eyer, Julie Grand, Kathy Griswold, Travis Radina and Linh Song. Taylor said he and colleagues worked on it with Jewish community leaders.

“Antisemitism is unacceptable at any time,” Taylor said, mentioning deadly shootings at U.S. synagogues in recent years and a hostage situation at a Texas synagogue last weekend, as well as other attacks against Jews in the U.S.

“This is the America in which Ann Arbor’s Jews live. This environment we condemn,” he said.

Anti-Israel protesters in Ann Arbor describe their demonstrations as peaceful vigils in solidarity with Palestinian victims of violence by an Israeli military funded by U.S. taxpayers, but their critics argue the demonstrations unnecessarily and relentlessly target one synagogue, causing anguish.

While the city doesn’t have legal authority to stop the protests, city officials can speak out, Taylor said, calling the demonstrations abhorrent.

“They express vile, antisemitic tropes, peddle conspiracy, and are designed to disrupt an innocent congregation as they gather, infants through elders, to celebrate, mourn, learn and worship,” he said.

Radina, D-3rd Ward, said protesters are espousing a dangerous, antisemitic worldview that claims “our Jewish neighbors, somehow simply by existing, are responsible for or loyal to the actions of a foreign government.”

Grand, D-3rd Ward, talked about her experience being Jewish in Ann Arbor.

During her daughter’s bat mitzvah a few years ago, the building was put on lockdown because of a shooting at a Pittsburgh synagogue, she said.

“And then every day afterwards, as I took my son to religious school, I had to worry about his safety,” she said.

Grand said some are concerned the protests at Beth Israel have gotten worse, coinciding with a rise in antisemitism.

Eyer, D-4th Ward, called it scourge on the community and said council’s resolution was long overdue. Targeting the synagogue is wrong, she said, suggesting the federal building downtown or the University of Michigan Diag are better places for demonstrations about federal and international issues.

“These protests instead are intentionally targeted at the religion, not the government policy,” she said.

Council Member Ali Ramlawi, D-5th Ward, proposed revising the part of the resolution that stated congregants have the right to worship, gather and celebrate free from intimidation, harassment and fear of violence. He proposed striking the word “violence” and changing it to “free from intimidating and harassing expressions of antisemitism and without fear.”

Council rejected the proposed amendment in an 8-3 vote, with only Griswold, D-2nd Ward, and Jeff Hayner, D-1st Ward, siding with Ramlawi. In a 9-2 vote, Ramlawi and Hayner were again outnumbered on wanting to remove the word “aggressive” from the description of the protests.

Ramlawi, who is of Palestinian descent, brought up his ethnicity during the discussion while stating he believes an attack on any religion is an attack on all religions. He wasn’t trying to give safe harbor to people with antisemitic views by proposing the amendments, he said, adding he was just trying to make the resolution stronger based on a city attorney’s advice.

Ramlawi was heavily criticized four years ago for accepting a $25 campaign donation from Henry Herskovitz, who has led the protests outside Beth Israel. Without mentioning Ramlawi by name, Eyer brought that up Tuesday night, saying council members shouldn’t accept campaign donations from “purveyors of antisemitism and hate.”

Ramlawi previously defended his decision to accept money from Herskovitz, saying he’s a 5th Ward resident and has a right to participate in the democratic process.

Purveyors of Holocaust denialism shouldn’t be given platforms in local discussions, Eyer said.

Herskovitz spoke at the end of the meeting, appearing before council in a T-shirt that read: “America First, Not Israel.” He couldn’t resist chuckling at the resolution, he said, accusing council of bowing to “Jewish power.”

Beth Israel’s rabbi said the resolution was important because it takes a stand against hate.

“The Jews of Ann Arbor are in deep pain,” he said, adding the resolution brought tears to his eyes.

It’s sad her children and others over the past two decades have had to walk past hateful signs to enter synagogue, Freed said, sharing words from a congregant who mentioned an active-shooter pamphlet in her prayer book and worrying about potential violence for practicing her religion.

Roger Cone, who lives by the synagogue, spoke on behalf of his neighborhood, describing negative interactions with protesters. One neighbor heard a mother walking her child past the protesters and asking, “Mommy, is that man going to hurt me?” he said.

“We want you to tamp down the hate that’s been going on constantly in this neighborhood,” Cone told council.

MORE FROM THE ANN ARBOR NEWS:

Subject: Beth Israel Synagogue and the

1. This relates to the weekly protests at the Beth Israel Synagogue and the Court of Appeals decision to allow these protests to continue notwithstanding its blatant anti-Semitism and its impact on religious worship.

The reasonable Constitutional scholar could posit that there are 2 concomitant issues involved in the protests at the Synagogue. They relate to Freedom of Religion and Freedom of Speech as specified in the First Amendment to the Constitution.

2. In this context, the legal scholar could reasonably posit that the decision of the Court and that of Judge Jeffrey Sutton is most unfortunate, injudicious and lacking judicial acumen. The decision was simplistic in nature and not an accurate assessment of Constitutional values. It is therefore noteworthy that the Ann Arbor Council voted to issue a formal Resolution condemning the weekly protests outside the Synagogue as anti-Semitic after 18 years after the protestors began harassing members of the Synagogue. The Council further declared its support for the Synagogue which its members and guests have the right to worship, gather and celebrate free from intimidation and harassment.

3. It is basic to understand that any right, constitutional or otherwise is not absolute. Rather, it involves a reasonable approach and interpretation as what is intended thereby. “One cannot have the right to shout fire in a crowded theater where there is no fire.” Moreover, one cannot exercise an alleged right which impacts, harasses or intimidates others particularly where those people are engaged in religious worship at their place of worship.

5. Judge Jeffrey Sutton in his decision declares his opinion that since there was no overt action against the protestors to the clearly anti-Semitic protestors there is no incursion

against the Freedom of Religion. What the Judge does not understand nor comprehend is that there is the element of emotional stress thereby particularly to those parishoners who were victims of the Holocaust and are now members of the Synagogue.

6. Moreover, there is another Constitutional issue that relates to what is meant by freedom of expression in the original intent of the Framers of the Constitution. Could they in any sense intend that freedom of expression could make life untenable to others by way of harassment and intimidation particularly in the face of blatant anti-Semitism which Judge Sutton apparently cannot grasp. The Framers of the Constitution were humanists and in many cases scholars of the Bible. One of their considerations was the basic human right and fundamental freedom in the area of freedom of worship which was one factor which led to the colonization of America.

6. In the final analysis, I am disappointed that the Synagogue did not file an appeal to the Court of Appeals and if necessary to the US Supreme Court. This issue is of an utmost important constitutional matter and should be brought to the attention of the US Supreme Court. Essentially, the Court of Appeals in its egregious decision is a participant that anti-Semitism is an acceptable form of protest.

Copy to: US Court of Appeals -6th District